Modigliani's Transfixing Portrait of a Youth

O f all Modigliani's works, few possess the poignancy of Jeune homme assis, les mains croisées sur les genoux. Painted just two years before the artist's tragic death, it holds the viewer with a penetrating gaze that conveys both intensity and a sense of emptiness. The absence of eyes suggests the infinite: that however everyday the outer form, there is an inner dimension that remains unknowable.

A tender and transfixing image that beautifully exemplifies Modigliani’s mature portraiture, Jeune homme assis, les mains croisées sur les genoux was painted while the artist was living on the French Riviera at the end of the First World War. In April of 1918 Modigliani and his companion Jeanne Hébuterne left Paris for the Côte d’Azur to live through the remainder of the war in relative safety.

Modigliani stayed on the Riviera until May 1919, dividing his time between Nice and Cagnes, and was in contact with a number of Parisian artists who had moved to the south of France for the same reason. After spending years immersed in the bohemian circles of Paris, where avant-garde painters including Soutine, Lipchitz, Cocteau and Kisling as well as writers such as Max Jacob and Paul Guillaume were all subjects of his portraiture, Modigliani now turned to anonymous sitters, executing a number of portraits of peasants, servants, shop girls and children of the Midi. 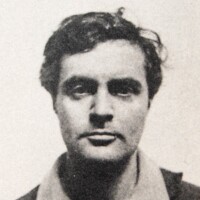 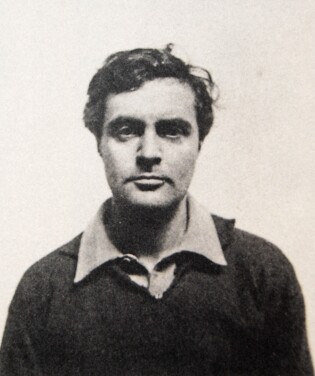 As Werner Schmalenbach wrote: “It was precisely at this time that Modigliani became the painter of simple, unknown, nameless people. He painted portraits of ordinary men and women: a gardener, an apprentice, a young peasant, a chambermaid, a woman druggist, and occasionally a child – people from a social background other and “lower” than his own. This sprang not from any hankering after social comment but from an intense interest… they convey a reticent but forcefully expressed inner sympathy, and they achieve great poignancy” (W. Schmalenbach, Amedeo Modigliani, Paintings, Sculptures, Drawings, Munich, 1990, p. 43).

This portrait of an unidentified model is indeed painted with a sense of empathy, and the serene beauty characteristic of Modigliani’s most accomplished paintings of this period. The boy is seen frontally in a three-quarter length profile, seated on a simple chair with his hands crossed on his lap, his head slightly tilted to one side. The mannerist, elongated features of the boy’s face and figure, as well as his dreamy, melancholy expression are a powerful synthesis of all those characteristic traits which Modigliani developed in his post-1916 portraits: the simplification of the human form, the s-shaped curve of the body inscribed by a flowing melodic line, the elongated neck and face with vacant eyes that render the sitter with an enigmatic and impenetrable mood.

Though he spent these final years of his life distant from the active scene of Paris, Modigliani was acutely aware of the artistic developments taking place. Many of his fellow artists and friends, such as Picasso, Brancusi and Soutine, were shifting from a realistic manner to the edges of abstraction. Whilst in the earlier stages of his career as both a painter and a sculptor Modigliani was at the forefront of these radical new styles that were shaping the development of twentieth-century art, Modigliani now preferred to explore the possibilities of interpretation within a more naturalistic approach to depiction.

What he undoubtedly shared with other avant-garde artists was a reverence for the important legacy of Cézanne, to whom he felt particularly close during his time in Provence. In much of his portraiture, Cézanne employed broad brushstrokes that simplified his subject while simultaneously deepening the breadth of expression.

As he painted Jeune homme assis, les mains croisées sur les genoux, Modigliani adopted a similar approach to the interpretation of his subject, imbuing simple and broad strokes with emotional profundity. What distinguishes Modigliani’s portraits is a delicate balance between a unique interpretation of artistic legacies and trends on the one hand and a naturalism and interest in the personality and psychology of his sitters on the other.

This unmatched ability for emotional expression through portraiture renders Jeune homme assis, les mains croisées sur les genoux a remarkably personal and intimate depiction. The palette of soft, earthy colours confers a feeling of tranquillity on the painting, while the almond-shaped, blank eyes of the sitter – which had become Modigliani’s trademark feature – convey both a sense of solitude, and of infinite possibility.