How Russian Porcelain was Reinvigorated

O ne of modernism's great achievements was the breakdown of historical boundaries between the fine and applied arts. In Russia, porcelain and ceramic design was reinvigorated in the first half of the 20th century in a kind of symbiotic wave created both by the Great October Revolution and the Russian Avant-garde.  Such is the aesthetic power and originality of early Soviet porcelain that it can command the sort of visual presence and depth of expression that you normally find in paintings. Many pieces were conceived and made as one-offs or were produced in such small numbers, or with variations in colour, that they are highly collectible and have historical value. Rarer pieces or prototypes can command strong investment potential.

In our Russian Works of Art auction in London on 28 November we are offering for sale a group of  some of the finest examples of early Soviet revolutionary porcelain. Together they show the enormous breadth of artistic production by often unsung yet highly talented designers and artists including Natalia Danko, Rudolf Vilde and Zinaida Kobyletskaya.  From 1918 the State Porcelain Manufactory, later named after Lomonosov, was a powerhouse of new design, quickly rejecting the outmoded subjects which had been popular during the Tsarist regime and adopting new forms fit for a new society. More, porcelain became a means of propaganda created to champion the power of the young Bolshevik state.

It is quite remarkable that the civil war which raged in the wake of the Russian Revolution did not hamper these designers, modellers and painters who represented new revolutionary ideals with such incredible zeal and enthusiasm.  I love Kobyletskaya's stunningly original and powerful design for her plate celebrating the fifth anniversary of the Revolution, which features an exploding red star made out of individually painted flames, with the rousing slogan "Long Live Soviet Power". Natalia Danko enjoyed a stellar career from the age of 27 as head of the sculpture department at the State Porcelain Manufactory.  Until her untimely death in 1942 after surviving the blockade of Leningrad, she designed and produced several hundred figurines depicting new soviet citizens, bringing forth heroes and heroines of Bolshevik Russia with a focus on everyday life, such as the utopian young couple, 'Activists' or students of the Workers' Faculty.

The Lomonosov Manufactory was not alone in embracing new forms of expression.  Several pieces in this group were produced in other porcelain manufactories, including Dulevo, Dmitrov and Pesochensk, which shows how universally Lunacharsky and Shterenberg's vision was adopted in the young Soviet Empire.  There are two wonderful and rare faience busts in this collection created at Pesochensk Manufactory which I find particularly fascinating: models in caricature of the great theatre director Vsevolod Meyerhold and Soviet actor Vasily Kachalov (lots 414 & 415).

In the second half of the 20th century it was mainly Westerners who collected Soviet porcelain such as the late Nicholas Lynn, an Englishman of great taste whose superb collection I was fortunate to study and sell twenty years ago.  Today the best pieces of early Soviet porcelain are making their way into important Russian collections and are finally finding their rightful place displayed alongside major modernist and avant-garde paintings by Russia's greatest artists of the era such as Natalia Goncharova, Kazimir Malevich and Marc Chagall. 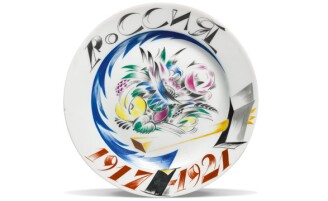