A s the most important work by Alexander Rodchenko to appear at auction for nearly three decades, 1919 masterpiece Construction No.95 (Estimate £2,500,000–3,500,000), looks set to mark a new auction record in the Russian Pictures sale in London on 29 November. Xerxes Cook surveys the Russian master’s influence on artists, musicians and pop culture.

"What happened between 1914 and 1935 has dictated everything that has happened since in any area of design”. This declaration was made by the influential British art director Neville Brody in an interview with Creative Review in 2008. Brody was describing the period when Alexander Rodchenko art directed the hugely influential journal for the Russian avant-garde LEF (Left Front of the Arts),  a publication that would go on to influence everything from legendary style magazine The Face to Kraftwerk and Stolichnaya vodka adverts.

Of the artist’s hugely varied output, perhaps no work is more delicately poised between the shifting social and cultural forces that determined the artist’s philosophy than his 1919 masterpiece, Construction No.95. The star of a collection of Russian avant-garde works coming to auction this November, Construction No.95 is part of a series of works Rodchenko built around a single geometric concept - the line - central to Constructivism, and with it, much of contemporary graphic design.

Construction No.95 was painted while Rodchenko and his wife Varvava Stepanova (also included in auction) were sharing a house with Wassily Kandinsky in Moscow. Working in the afterglow of the revolutions and upheavals of 1917, Rodchenko believed in showing people new ways of seeing to open up new ways of thinking, and that experiments in art and creativity should reflect the transformations taking place in what would soon be the Soviet Union. Taking geometry as his guide, Rodchenko began reducing and separating painting out to a purely elemental level of line, colour, form and texture.

Composed of a yellow grid offset upon seven black lines painstakingly reproduced using a ruler and thin bristly brush against a reddish-orange background, Construction No.95 is emblematic of Rodchenko’s experiments in creating a new visual vocabulary able to communicate on a more visceral level than verbal language, and reveal the organising principles through which we compose and view the world.

First exhibited at the 19th State Exhibition, Construction No.95 was part of his series Linearism, of which there were only 14 paintings - the main body of the series consisted of graphic design works - each a ‘Construction’ with a unique serial number. Rodchenko would later credit the line as his invention and foremost contribution to the development of ideas in contemporary art. The grid was to inform the post-War International Style of graphic design and typography developed by the Swiss School, and reappear as a generative matrix for artistic production in Sol Lewitt’s paintings of the 1960s and beyond.

A year later, Rodchenko would go on to take “painting to its logical conclusion” with his triptych of primary colours Pure Red Color, Pure Yellow Color, Pure Blue Color, before then renouncing painting altogether, believing oils and the easel to be the antithesis of technological progress. Instead, the artist turned to the printing press and the dark room, dedicated his skills to the more accessible, utilitarian applications of graphic design and photography for books, posters, and films, such as Sergei Eisenstein’s Battleship Potemkin.

It was this period of his life that also saw him art direct LEF which ran from 1923 to 1930, and of a practice that would be endlessly referenced and reappropriated by artists, designers, musicians and marketeers ever since. As whether it’s in Barbara Kruger’s monochrome photomontages overlayed with political slogan; the stark red, white and black logo and typography of early editions of The Face magazine in the 1980s; or Stolichnaya vodka adverts from the 1990s; the journal’s influence is everywhere.

As Kraftwerk’s ode to industrial existentialism, 1978’s Man Machine demonstrates, musicians aren’t immune to Constructivism’s charms either. In the early 2000s, the Scottish band Franz Ferdinand would take the Rodchenko reference further, basing the composition of their 2004 single Take Me Out around the curling page motif of the Russian’s One-Sixth Part of the World poster, and repeating the trick a year later for their 2005 album You Could Have It So Much Better which reappropriates Rodchenko’s most famous poster, an advert for the Lengiz Publishing House in which the muse and society beauty Lilya Brik shouts out “Books!”, and replaces the Cyrillic script with the group’s name.

With Rodchenko’s skill in creating a sense of spontaneity and joie de vivre through the iconography and technology of industry, Brody goes beyond citing the Russian’s influence on movements such as the Bauhaus, De Stijl and Minimalism, to finding something in the composition of Rodchenko’s paintings and designs that “anticipates abstract expressionism by a good 50 or 60 years. It’s so abstract, it’s completely apolitical. Rodchencko was more about humanism and humanitarianism than communism.” The human spirit always endures. 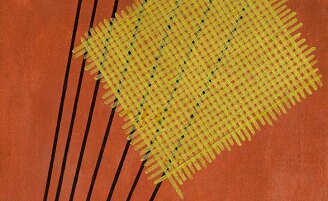