By David Macdonald
The small group that follows comes from Ombersley Court in Worcestershire, a hidden gem which is one of England’s most magical country houses.

T hese items have been carefully selected, many from the stores and attics at the house and are offered here to raise funds for the conservation of objects and to safeguard the historic collection from the Court.

This extraordinary house and the collections within, have been shaped by the family whose possession it was. It was built for Samuel Sandys (1695-1770) who was created 1st Baron Sandys in 1743 and the fourth by that name to have lived at Ombersley. In 1723 he commissioned the great Midlands master-builder and architect Francis Smith of Warwick to begin work on the house which features an interior, described by Pevsner, as the house’s ‘glory’. Sandys was Member of Parliament for Worcestershire from 1718 until his elevation to the peerage and he served as Chancellor of the Exchequer and Leader of the House of Commons in 1742/43. In 1725 he married Laetitia Tipping.

Their new home, perhaps in part, commemorated their marriage, it certainly befitted a young, glamorous and wealthy couple. Sumptuous textiles, some from the 18th century survive (lots 54-59) and reflect their tastes. Locked away in an old trunk in the attics was roll of azure silk the colour of a turquoise sea, a hint at the former glory of a bedroom decorated in blue satin. Some of the ceramics in the collection could well be from their tenure too. They clearly had a predilection (and typically for that period) for Chinese blue and white porcelain and blanc de chine figures (lots 3-8 and 13) along with Dutch Delft pots which held orange trees, some of these ceramics are described in the first inventory at Ombersley Court circa 1750.

These pieces augmented fine gilt furniture, console brackets and chimneypieces in Smith’s sumptuous rooms. Sandys was a patron of the Worcester Porcelain factory and asides from geographical proximity, there was a strong familial link with the factory as his first cousin Catherine Sandys married John Wall (1708–1776) one of the founders. ‘The Sandys Mug’ in the British Museum (acc.no. 1923,0716.27.CR) has a dedication that celebrates this relationship; ‘Lord and Lady Sandy’s health T*G -1759’. Undoubtably the early Worcester in the collection was acquired by Lord Sandys or his wife (lots 15-18).

In 1770 Ombersley passed to his son, Edwin (1726-1797), who succeeded as 2nd Baron Sandys, an MP for Droitwich and noted scholar, he was also a prominent figure of the literary society that congregated around Samuel Johnson and Sir Joshua Reynolds. He entertained Dr Johnson in 1774; who was impressed with the nobility of the hall at the Court and the sweetness of the fruit that was served in abundance.

He died without issue and consequently the house and collections were inherited by Mary his niece and the wife of Arthur Hill, 2nd Marquess of Downshire (1753-1801). In 1802, following her husband’s death, the dowager Marchioness was created Baroness Sandys in her own right, with a special remainder to her younger sons. She was responsible for the exterior of house as it appears today; ‘The little Marchioness’, as she came to be known, brought not only a fortune but inherited treasures like the Blundell Bowl (lot 1) to Ombersley.

Between 1812 and 1814 the building programme involved re-facing the house in dressed stone, adding a portico and a new wing on the north side which contained a large dining room (which was to be filled with Sèvres white paste figures and probably lot 24). Like her grandfather she continued to patronise the Worcester factory, visiting in 1807 with the Prince of Wales. It is possible she acquired the ‘Gold service’, a great State service for his visit and stay at the Court in September 1807 (lot 23).

The Marchioness was part of the Prince of Wales intimate circle and he was to greatly influence her collecting. Like him she loved luxurious porcelains, particularly French and German pieces and much of the best was probably acquired by her, appearing in inventories after her tenure but not before. Some of the finest jewels from this group are described in the most private of spaces, her bed chamber and dressing room (lots 30 and 31).

The superb pair of Sèvres bleu nouveau vases (lot 34) relate to a garniture supplied to George IV by François Benois in 1820, and one can’t help but think he or other Royal agents may be responsible for supplying the Marchioness with similar. This shared patronage is particularly compelling when assessing one of her most spectacular commissions at Ombersley, the Chinese Sitting Room. 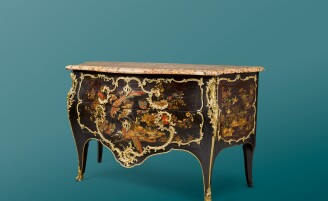 A room where the Prince’s influence could not be more keenly felt, a mini Brighton Pavilion in Worcestershire. The Chinese painted figures (lot 12) relate to very similar in the Royal Collection today and this glorious room from which they come is a triumph of high Regency chinoiserie whimsy.

In 1836 her second son, Lord Arthur Hill (1792-1860) inherited the Barony (of the second creation) and house. A distinguished soldier, he had served with the 10th Hussars in the Peninsular War and was on Wellington’s staff at Waterloo. The ‘great Duke’ even stayed at Ombersley. His younger brother, Lord Marcus Hill (1798–1863) was a prominent British diplomat and there are trophies from his missions, most notably as secretary of legation in Lisbon (see lots 44, 45, 49).

Later a special envoy to both Tsarist Russia and though he declined the Sublime Porte at Constantinople, he succeeded his brother as 3rd Baron Sandys in 1860. He is reputed to have brought Worcester Sauce to Worcestershire and have invented the Bloody Mary! His son, Augustus Frederick (1840-1904) became the 4th Baron.

Contemporary photographs from his tenure show the Court packed with collections, tables in the State Rooms groan with mementos and bibelots, the Great Hall has a profusion of plants and hunting trophies and intriguingly there are birdcages too, the cockatoos they contained perhaps a reference to the triple family portrait by Enoch Seeman (p.16) and probably the reason why lot 14 ended up perched within a truly special collection. 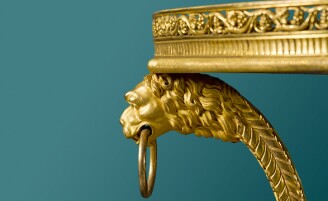