Capturing the Beauty and Defiance of Alice Derain

D epicting the young Alice Géry, Picasso’s Tête de Femme (Alice Derain), which features in the Impressionist & Modern Art Day Sale in London on 22 June, evokes a quiet elegance and  reverence, reminiscent of his female depictions of circa 1904–05. Picasso’s and André Derain’s friendship would prove to be of abiding importance to both artists.

Notoriously unfaithful, Alice Géry had married the mathematician Maurice Princet, who is recalled by John Richardson to have also dabbled as an art dealer, and soon after, towards the end of 1905, left him for the painter André Derain whom she had met through Picasso; the two were married in 1907. Pierre Daix theorises that it was ‘thanks to Alice…[that] Derain began to frequent the Bateau-Lavoir circle, which brought Picasso even closer to the Fauves and fed his hunger for new values.’ (Pierre Daix,’The Years of the Great Transformation’ in Picasso 1905-1906: From the Rose Period to the Ochres of Gósol, (exhibition catalogue), Barcelona, Museu Picasso & Bern, Kunstmuseum, 1992, p.42)

Commenting on the sitter, John Richardson records that Picasso nicknamed Alice, ‘la vierge’, and indeed, her Madonna-like features in the present work echo his previous works on the theme. Gertrude Stein rather recalled the Madonna-Alice as ‘the daughter of a working man [she] had the brutal thumbs that… were characteristic of working men… she had a certain wild quality that perhaps had to do with her brutal thumbs and was curiously in accordance with her Madonna face’ (Stein quoted in John Richardson, A life of Picasso, 1991, p. 306). Whilst Stein focuses on Alice Derain’s contradictory ethereal and human features, Picasso was said to be enthralled by the beauty and defiance of this young woman mingling with the bohemian Bateau-Lavoir artists.

Picasso had been living in Le Bateau Lavoir in Montmartre since 1904, so named because of its resemblance to a Seine washing barge, a cultural melting pot of artists and bohemians.  Montmartre, Roland Penrose described “being a village within a city…was almost self-contained. Within a small distance a great variety of amusements and theatres were at hand. For some years the most popular place of entertainment was the Cirque Medrano, which to this day still continues to enchant successive generations of Parisians. Its clowns, acrobats and horses had delighted Degas, Toulouse-Lautrec, Forain, Seurat and many others. There, behind the scenes and outside among the sideshows of the fair that traditionally occupies the whole boulevard during the winter, Picasso made friends with the harlequins, jugglers and strolling players. Without their being conscious of it, they became his models” (Roland Penrose, Picasso: His Life and Work, 1981, p. 110). In much the same manner, Alice Derain’s spirited appearance in the Bateau-Lavoir circle and her striking beauty, captured Picasso’s creative attention in this period. Picasso first drew a portrait of Alice in 1905, in which she is depicted with an elongated, almost Mannerist, profile. Her features are echoed and mingled with other models in works of this period, breaking into new ground only when Picasso focuses on his lover of the time Fernande Olivier.

The present work focusses on the bust of the sitter, reminiscent of Florentine late quattrocento bronzes such as the works of Antonio Rossellino. Alice is posed in an-almost three-quarter turn, the bronze gently modelled and her features at rest. Alice and André remained good friends with Picasso, spending summers together in Cadaques, most notably in 1910, the critical year when Picasso is known to have pioneered a new ‘Analytical’ interpretation of Cubism.The Impressionist & Modern Art Day Sale is in London on 22 June. 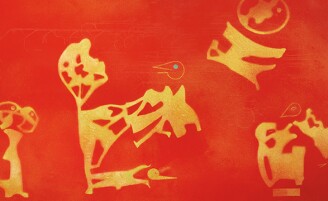