Alfred Kubin, Darkness and Light: Property of the Heirs of Max & Hertha Morgenstern

T en works from Alfred Kubin’s most iconic and creative period, formerly part of Max Morgenstern’s collection, are being offered at auction in the Impressionist & Modern Art Day Sale on 5th February. Morgenstern was Kubin’s first patron, supporter and lifelong friend and the works’ distinguished provenance is testament to their superb quality.

Kubin and Morgenstern’s relationship was one of mutual admiration and understanding and Max became one of Kubin’s most important and influential mentors. Born in 1883 in Moravia, then part of the Austro-Hungarian Empire, Morgenstern made his fortune by building up his father’s textile mill in Bielsko-Biala in Poland. In the early 1900s, he began collecting works by Kubin and compiled a magnificent library of over 1,500 rare books. In 1922, Morgenstern married Hertha Israel from Berlin and together they established their family home in Wattmanngasse in Vienna. 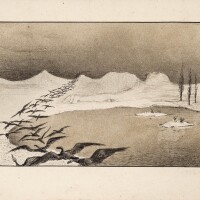 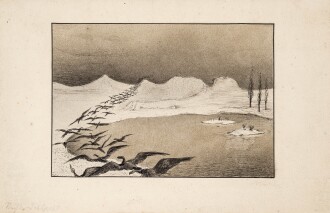 Life changed dramatically for the Morgensterns when the Anschluss occurred in 1938. With Max tending his business in Poland and the Nazi authorities pressing them, Hertha was forced to sell at low value a group of twenty works on paper by Kubin to the German collector Kurt Otte. Shortly afterwards, Hertha and Max separately escaped, first Hertha from Vienna, and a month later, Max from Poland. They managed to join their sons in England and eventually settled in Bradford in Yorkshire.

The Nazis seized most of the Morgensterns' possessions but amid the few belongings that accompanied them to England were these ten intriguing works by Kubin. Chosen to be part of the Morgenstern’s personal collection, the history of these ten works, which have remained with their initial and only owners during the tumultuous Nazi rise until now, adds a poignancy to the works’ meaning, which are now coming onto the art market for the very first time.

In June 2019, sixteen works by Alfred Kubin were restituted to the heirs of Max and Hertha Morgenstern and were sold in Sotheby’s Impressionist and Modern Art Evening and Day Sales, five of which broke the artist’s auction record, with Epidemie achieving £963,000.

Kasuarkopf, lot 142 of the forthcoming sale, intricately rendered in painstaking detail, not only conveys Kubin’s mastery as a draughtsman but also sheds further light on his investigations into nature. The bird is big and majestic, zoomed in to take up the majority of the sheet. Kubin leaves the bird’s prowess up to interpretation, as the creature is still and waiting. However, via the dark colours applied for the bird’s body, whose whole size is left to the viewer’s imagination, his piercing eye and looming presence suggest a level of menace which casts an unsettling feeling.

Lots 149 and 150 – Prähistoriche Vögel and Prähistoriche Büffel – exhibit an extremely interesting part of Kubin’s œuvre, which preceded the angst-ridden imagery of torment and despair that has come to define his artistic corpus. At the turn of the century, science dissemination was extensive and the popularisation of Darwinism crept into the imagery of many German artists.

Prähistoriche Vögel and Prähistoriche Büffel reflect this Darwinian influence in their depiction of pre-historic species, also demonstrating Kubin’s experimentation with combining the mediums tempera and gouache. In Prähistoriche Vögel, Kubin renders the extinct flightless ‘elephant bird’ who lived in Madagascar until about 2,000 years ago. Displaying their characteristically odd thick legs and broad webbed feet, they could grow up to over ten feet tall and weigh around half a tonne.

Prähistoriche Büffel depicts two animals, which have characteristics both of a bull but also of a bear. One lies in the foreground while the other paces in the distance. Here, Kubin is playing with Darwin’s theory of the struggle for existence and the struggle for mates. He creates a moment of suspense between the two creatures; will they become companions and procreate or will a hostile encounter ensue?

In 1898, Kubin went to Munich to study art, although he soon abandoned his lessons at the Akademie der schönen Künste. Kubin’s talents as a writer and a philosopher began to manifest themselves at this time and he made a concerted effort to study the philosophical works by Friedrich Nietzsche and Arthur Schopenhauer. Darwinian influence provided Kubin with the intellectual methodology of using the studies of nature as a launch pad for the exploration of contemporary society and the depths of the human psyche.

Kubin’s graphic art is best known for probing the mysteries of human behaviour and the subconscious. These depictions of pre-historic animals are very much a product of the artist’s attempt to work out the complexities of our world, its species and human nature.

It is Sotheby’s honour to present this group of works by Kubin with such prestigious provenance and it creates another opportunity for a new generation of collectors to enjoy the legacy of the Morgensterns and the creative ingenuity of Alfred Kubin. 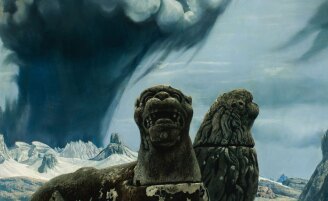