A Touch of Green from Magnificent Jewels

G reen is a color that brims with promise. It heralds the coming of spring, regeneration and new growth. "The most abundant hue in nature, the human eye sees more green than any other color in the spectrum,” according to Leatrice Eiseman of the Pantone Color Institute. The color, she says, “brings a sense of clarity, renewal and rejuvenation, which is so important in today's complex world."

In gemstones, the deep hues of emerald or the finest jadeite are all the more captivating – almost glowing with mysterious fire, or in the case of the jadeite, possessing an almost aqueous quality that captures light in a very special way. Sotheby’s Magnificent Jewels sale (10 July, Hong Kong) presents an exceptional pair of emerald and diamond earrings from Harry Winston, while also celebrating the revival of jadeite to the market with a selection of the finest jadeite jewelry with gemstone quality that meets world-class standards.

“All the green of nature is concentrated within the emerald.”

Harry Winston’s quintessential pear and marquise-shaped clusters are the ultimate embodiment of timeless glamour. The colors of the emeralds are an intense and saturated green, accurately representative of what is known as “Classic Colombian” material. The stones were honored with an AGL appendix letter confirming their prestigious origin, stating that “emeralds of such color and quality are consistent with gems that have originated from the Muzo mining district.” Furthermore, the appendix emphasizes the rarity of the quality of the emeralds in combination with its excellent Match Pair Rating™, the highest ranking the laboratory offers to only stones in achievement of the highest level of exclusivity. In the president’s words, the “well-matched pair with a total weight of 38.96cts…represents a unique collaboration between the fashioning of man and the formation of nature. For the aficionado of Colombian material, these gemstones represent a unique time capsule of Colombia’s history and its contribution to the world of emeralds.”

The jadeite bead necklace is among the most coveted and luxurious status symbols a collector could aspire to obtain. The beads, numbering 37 in total, offered this season are notable in size and gently graduated. The beads boast the luminous imperial green, and as if lit from within, possesses a soothing almost unctuous tactile quality. The depth evokes a sense of tranquility, as if staring into a lush forest canopy, with the sunlight filtering through the thick foliage. Each bead matches uniformly in color and texture, an effect that can only be achieved by carving from the same rough. Over half of a material’s rough can be lost in the attempt to cut out a presentable sphere. Beads of this quality can typically only be achieved in sizes around 5-10mm in diameter. To have 37 of such superior quality beads of such size, would have meant a tremendous amount of expenditure to top quality material, all to achieve the seamless symmetrical gradient this necklace possesses.

To envision a boulder large enough to accommodate the design in a green vein of such superior quality, and then to conceptualize the immense wastage involved in fashioning the forms, is hard to even fathom. The finished works are a perfect celebration of the material, which is a singular miracle of nature. The perfect proportion, shape and polish of this piece call for the highest level of craftsmanship in the world— possessed of supreme artistry, keen judgment and meticulous precision. The rarity of this jadeite bead necklace cannot be overstated.

Collecting jadeite jewelry has a long tradition history in Asia, famously prized at the Qing Imperial court. The aesthetics of jade may be deeply ingrained within Chinese cultural traditional, however appreciation of the beauty of this stone is universal and modern.

Color is one of the most important factors in understanding the stone. Jadeite is found in a variety of colors ranging from greens, mauve, yellows, white, and black. However, the most sought after color is a rich green hue also known as "Imperial Green" which is found almost exclusively in the deposits of Myanmar.

Many descriptions will compare the lustrous deep color of Imperial Green to a bright emerald color, deeply saturated with a deep medium tone. Often the hue of top-quality stone is just slightly more yellow than that of a fine emerald green without any off-tones such as brown or grAy, and no inclusions. The best examples should be highly saturated, slightly unctuous and penetrating, showing intensely even when viewed from a distance. The tone should be neither too light nor too dark. Finally, the color should be evenly distributed without showing veins, clouding, mottling or blotches. While jadeite might range in opacity, the most prized stone may be as transparent as thick honey, which will give the gem a distinct glow when the light is caught within the stone and reflected back.

The Finest Selection of Jadeite and Emeralds from Magnificent Jewels 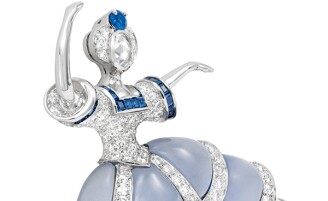