1. Alexander Calder was born in Philadelphia in 1898 to a family of artists. His mother was a painter, and his father, Alexander Stirling, and grandfather, Alexander Milne, were both well-established sculptors.

2. Technically, Calder’s first kinetic sculpture was of a duck, which he presented to his mother as a Christmas gift in 1909. It was made from a formed, brass sheet and rocked back and forth when touched.

3. Although Calder is known internationally as an artist, he initially studied mechanical engineering at Stevens Institute of Technology in Hoboken, NJ. He also held various odd jobs such as a steamboat fireman, automotive engineer, logging camp timekeeper, and hydraulics engineer.

4. While working as an illustrator for the National Police Gazzette, Calder began taking evening drawing classes at the 42nd Street New York Public School; a year later, he began studying painting at the Arts Students League with John Sloan and George Luks.

5. The National Police Gazzette once sent Calder on assignment to the Ringling Brothers and Barnum & Bailey Circus to illustrate the various acts. It was this experience that inspired the multi-part installation Cirque Calder (Calder’s Circus), (1926–1931).

6. Calder relocated to Paris in 1926, and became close friends with the painter Joan Miró, a friendship that would last for decades.

7. Galerie Percier, on the right bank of Paris, hosted a performance of Cirque Calder in 1931, which would ultimately solidify Calder’s status as a world-renowned artist. The performance was attended by nearly the entire Parisian art scene, including Le Corbusier, Man Ray, Jean Cocteau, and Pablo Picasso, among others. Despite its critical success, not a single work was sold.

8. The acclaimed artist Fernand Léger wrote a short piece for the 1931 Galerie Percier exhibition catalogue. Léger noted that while artists like “[Erik] Satie and Duchamp are 100 percent French,” Calder “is 100 percent American.”

9. Many of Calder’s sculptures, most notably the individual parts of Cirque Calder, were moveable through the artist’s manipulation of various pulleys and cranks; many consider this an early antecedent of Performance Art, although it predated the movement by nearly 40 years.

10. Calder visited the studio of the artist Piet Mondrian in 1930, a moment that ultimately marked his transition from figuration to abstraction. Calder would later write of the experience that it was “like the baby being slapped to make his lungs start working,” and that it “gave [him] the shock that converted [him]” to abstraction.

11. Mondrian’s painting was most likely the initial inspiration for his primary-colored mobiles; while surveying the multitude of geometric canvases in Mondrian’s studio, he remarked, “that perhaps it would be fun to make these rectangles oscillate.”

12. Despite Calder’s earliest kinetic sculptures’ ability to move via mechanical power, his later works instead tended to rely on the natural movement of air in whatever space they occupied.
Image 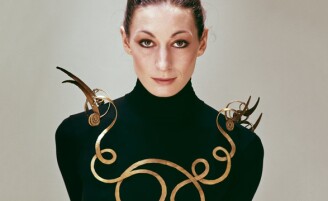 14. Calder won first prize at the 1952 Venice Biennale, which catapulted him to fame and was the catalyst for several high-profile public commissions around the world, including the massive mobile piece Flight installed at John F. Kennedy International Airport in New York City.

15. Although primarily known for his traditional artworks, Calder was a talented jeweler, and made various types of jewelry throughout the course of his career. He would most often make these items as gifts for close friends.

16. He undertook numerous transatlantic trips between the United States and Europe. It was on one of these voyages that he met Louisa James, whom he latter married in 1931. In 1933, Calder and his wife settled permanently in Roxbury, Connecticut. It was from this point, perhaps influenced by the stability of his home life, that he began experimenting with and creating more substantial, large-scale sculptures.

17. Calder’s first solo show was at the Weyhe Gallery in New York City in 1928; his first retrospective, Calder Mobiles, was presented at the George Walter Vincent Smith Gallery in Springfield, Massachusetts, only a decade later in 1938.

18. The Museum of Modern Art, New York, honored Calder with a retrospective exhibition in 1943; he was the youngest artist ever to be the subject of a retrospective at the Museum.

19. The influential philosopher and author Jean-Paul Sartre was a great fan of Calder’s, once writing of his sculptures that “They are symbols of nature—that great vague nature which wastes pollen or which suddenly produces the flight of a thousand butterflies, that unknown nature which might be a blind chain of cause and effect or a timid development, always delayed, always disturbed, inspired by an Idea.” (December 1947).

20. Alexander Calder’s stabile, La Grande Vitesse (1969), was the first artwork ever to be funded by the National Endowment of the Arts. It is installed in the City Hall plaza of Grand Rapids, Michigan.

21. Alexander Calder died from a heart attack, mere weeks after a major career retrospective at the Whitney Museum of American Art, New York, in 1976 at the age of seventy-eight. 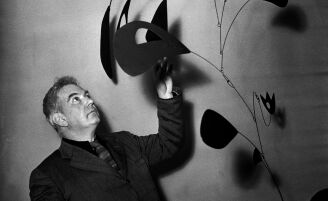