I mbued with personalization and sentimentality, the gift of a homemade treasure renders its value incomparable. Imagine if that bespoke present was from legendary American artist and sculptor Alexander Calder. For artists, patrons and independent spirits like Peggy Guggenheim, George O’Keeffe, Simone de Beauvoir and Joan Miró, such was not only reality but also a somewhat regular occurrence. What began as a love of found objects and inexpensive, malleable materials like silver wire grew into one of Calder’s most lauded mediums: jewelry. The first lucky recipient of the artist’s handmade accessories? His sister’s dolls. 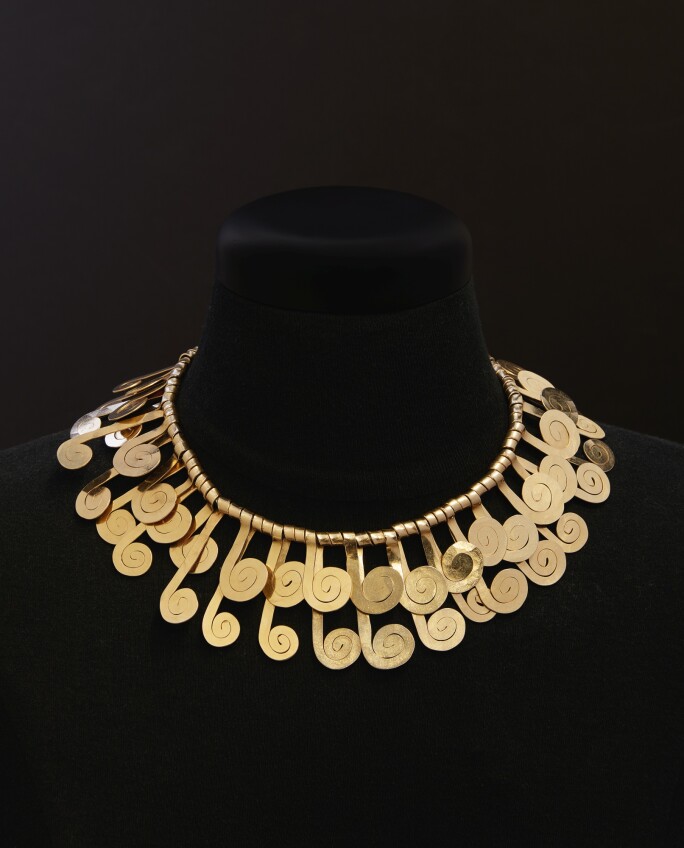 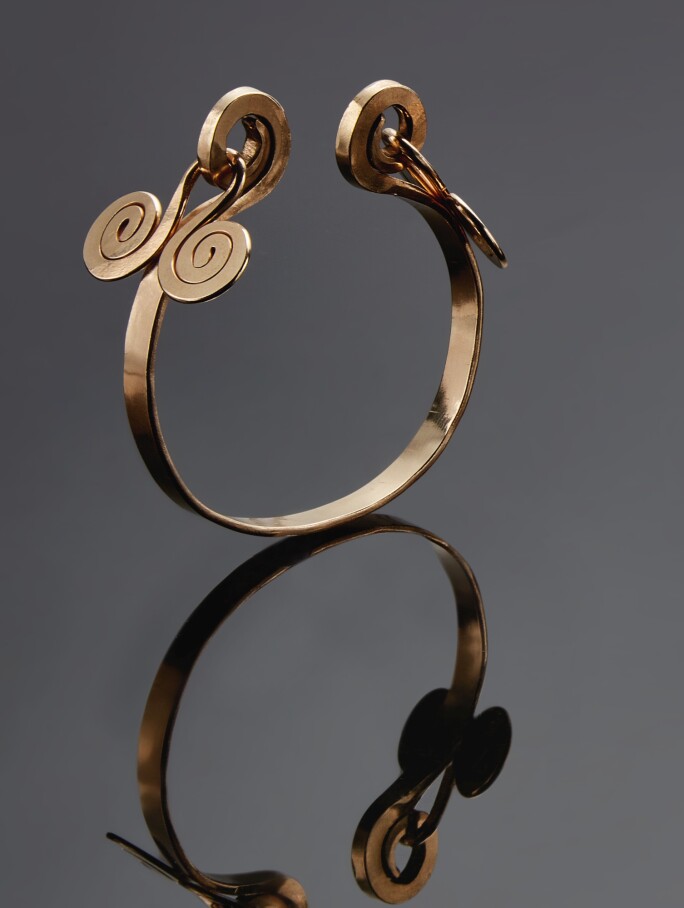 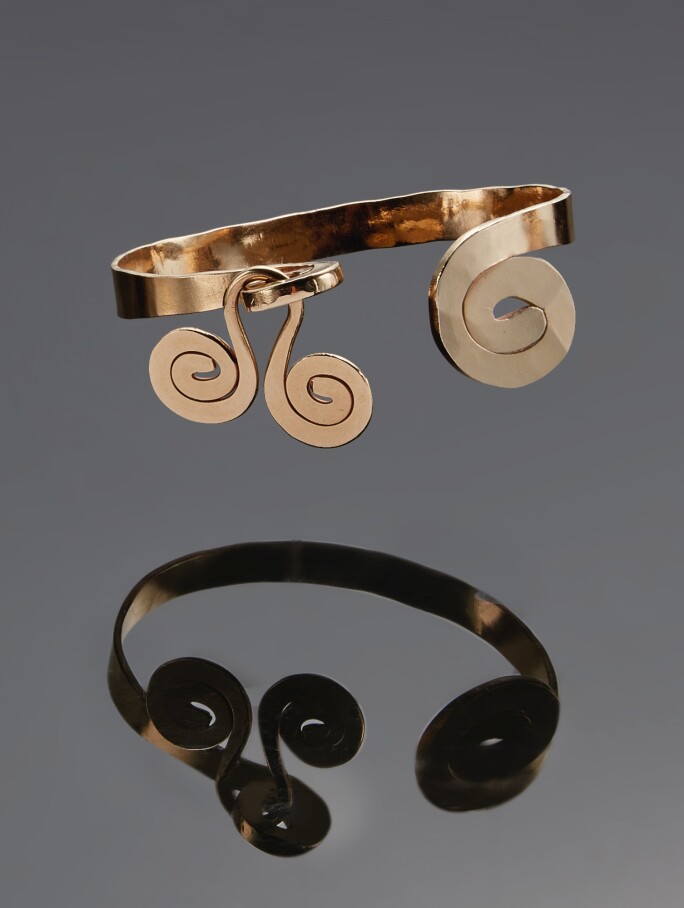 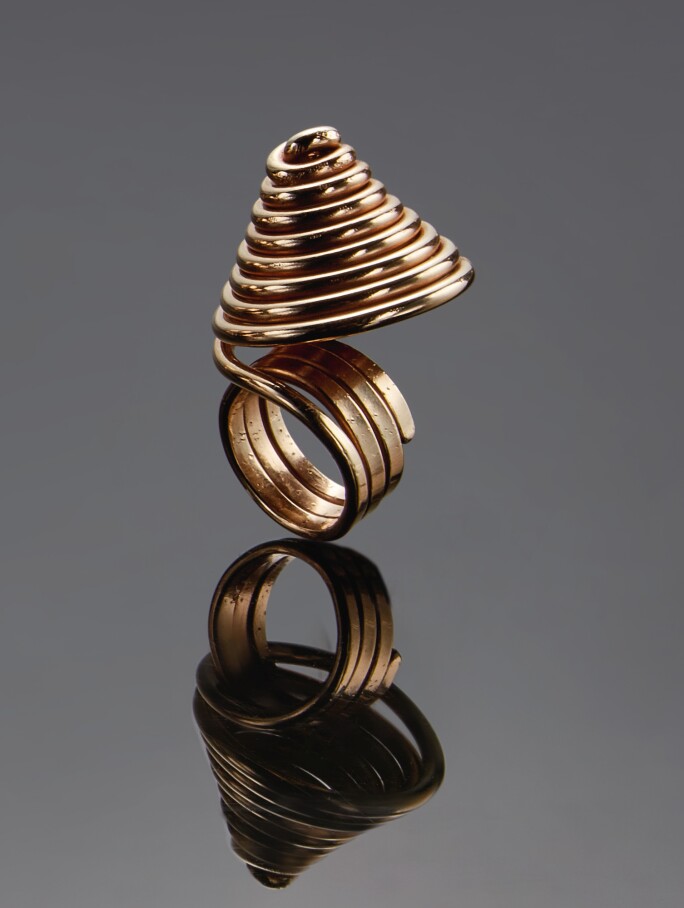 Calder was eight in 1906 when he transformed copper scraps he found in the street into miniature necklaces, and throughout his life, he created approximately 1,800 unique pieces. From structure to material, Calder’s jewels exhibited many of the same features as his famed mobiles and stabiles. Calder began sculpting with brass, a more affordable option during the war years, and as he honed his metalworking skills, he incorporated silver and gold. He would continue embellishing pieces with ceramic, glass and wood shards, as well as other found objects.

Towards the end of the 1920s, the artist was developing his iconic Cirque Calder. His dexterity with wired forms made for an easy transition into wearable sculpture. He hammered and bent metals into jewelry and sold them as an easy source of income – although the jewels were surprisingly affordable. Elisabeth Agro, a Philadelphia Museum of Art curator, said one of the Calder brooches in the museum’s collection was originally listed by the artist for $25. Though Calder’s avant-garde rings, tiaras, necklaces and brooches gained traction with celebrities and notable figures, the artist refused to mass-produce his creations. “Each work is completely unique—just like his mobiles. His pioneering aesthetic remains an inspiration for leagues of studio jewelers today,” explained his grandson, Calder Foundation President Alexander S. C. Rower. Rather than using traditional jewelry techniques like soldering and welding, Calder created all fixings and links through bent metal. His jewels often show tool marks and unpolished surfaces, adding to their handcrafted charm.

Many pieces were inspired by their wearers, such as O’Keeffe’s iconic initial brooch. In 1930, Caldergifted his love Louisa James a hammered gold, spiral-shaped ring he made with a Parisian jeweler. “I thought this would do for a wedding ring,” Calder recalled three decades later. The couple wed in 1931, and throughout their marriage, Calder made his wife many homemade accessories, from coat buttons to brooches inscribed with significant dates.

Throughout the 1930s, 1940s and 1950s, Calder increasingly produced jewelry. Working amongst Modernists in Paris and Abstract Expressionists in New York, Calder’s art reflected a variety of movements and trends, such as the early 20th-century vogue for collecting African art. Calder’s graphic jewelry harkens those of ancient cultures – the spiral, for example, was a frequent Bronze Age motif. His 1930s jewels embraced Surrealism; their dramatically large and cumbersome stature likened their wearers to performance artists. “Every woman in New York who is fortunate enough to be decorated by a Calder jewel has a brooch or a bracelet or a necklace,” Peggy Guggenheim said. “I am the only woman in the world who wears his enormous mobile earrings.”

Indeed, Calder’s jewels reflected his appetite to create and experiment with motion, balance, space and form. Constructed as coils, spirals, waves, zigzags and hearts, these ornaments never took themselves too seriously. Instead, it is their fearless embrace of whimsy and inherent impracticality that defied convention, then and now.