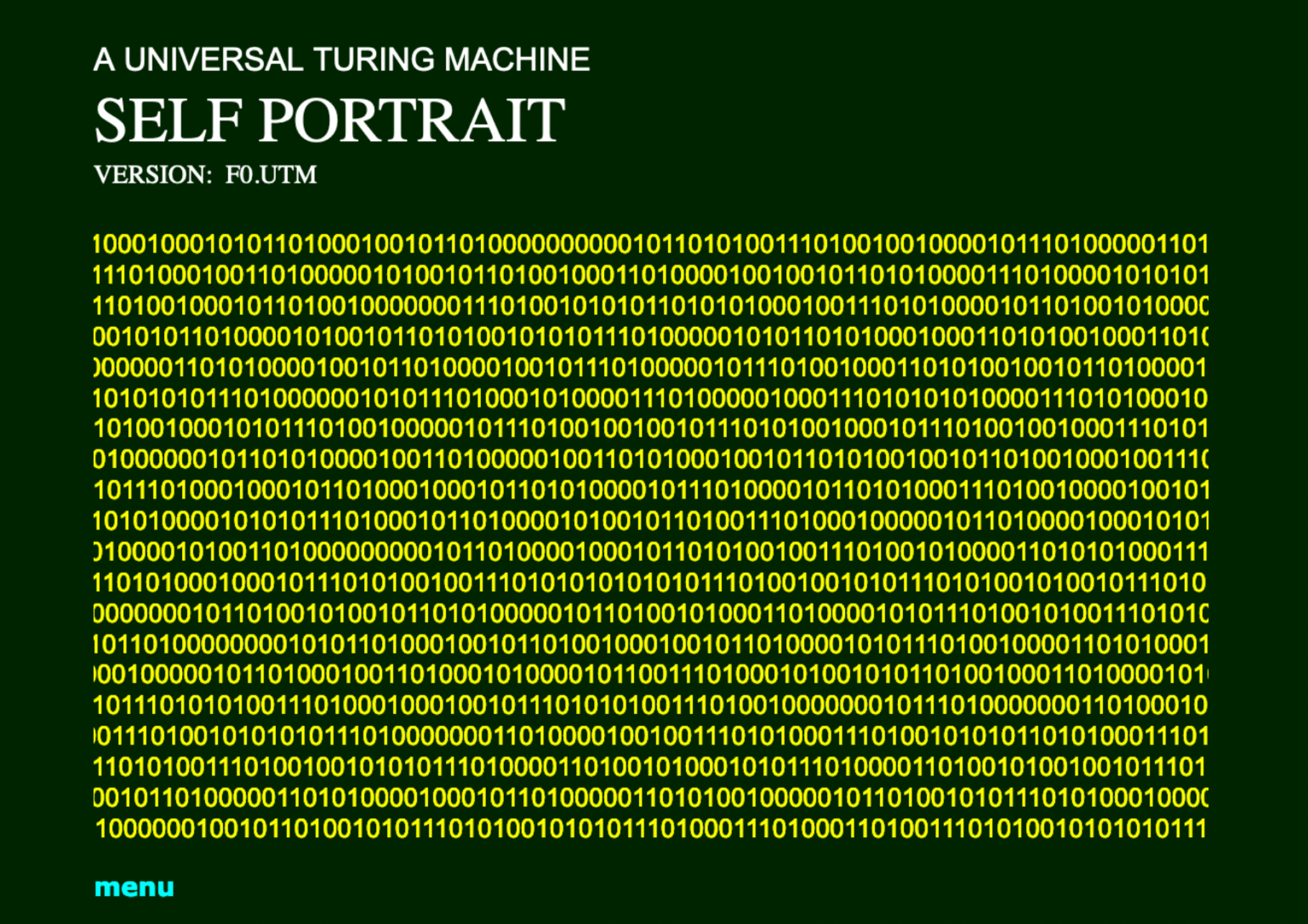 As of 2022, to view all variables of the work as intended, Universal Turing Machine Self Portrait Version F0.UTM requires a Mozilla Firefox desktop browser with the window scaled to approximately 660 x 500px. Suggested browser version at this time is 98.0.1.

Computer art pioneer and co-founder of the Algorists, Roman Verostko has been creating unique generative works since the 1970s.

As a Pennsylvania native, Verostko attended the Art Institute of Pittsburgh for illustration in the 1940s but his interests turned to monastic life at Saint Vincent Archabbey in 1950. Through his monastic studies, Verostko acquired a deep understanding of philosophical syllogism and logic argument. As an ordained priest in 1959 and an Editor of New Catholic Encyclopedia, Verostko was sent to Paris and went on to receive an MFA at Pratt Institute in New York.

In 1968, Verostko left the monastery and became a professor at the Minneapolis College of Art and Design. Following an introduction to programming language at the Control Data Institute in Minneapolis and a summer at MIT’s Center for Advanced Visual Studies in 1970, he was exposed to and inspired by algorithms executed by computers. Within a decade he converted his studio into an “electronic scriptorium” filled with CPUs and drawing machines.

Verostko created his Universal Turing Machine Self Portrait in celebration of Alan Turing’s seminal text, On Computable Numbers (1936). Turing’s paper outlined a procedural method for deciding all “decidable” statements and ultimately identifies the concept underlying all of computing, now ubiquitous within global society.

Verostko became captivated by the Universal Turing Machine procedure or “meta-algorithm of algorithms” as described in The Emperor's New Mind: Concerning Computers, Minds and The Laws of Physics (1989) by Sir Roger Penrose, noting,

“To me it symbolized a historical turning point in the human ability to manage extensive rational procedure. Many are not aware of the time when ‘computers’ referred to humans who did the computing. Those who recognize the power of algorithmic procedure implemented with computers will appreciate the beauty and power of Alan Turing’s contribution and recognize its special place in the history of ideas.”

This historic version of Verostko’s Universal Turing Machine Self Portrait Version F0.UTM, was written by Steven V. Gunhouse, Ph.D., and employs Fibonacci numbers as the basis for its organization as it is believed Alan Turing maintained a special interest in Fibonacci numbers in relation to biomorphic structures. Recognizing that Fibonacci numbers have a revered place in the history of art, F0.UTM, also known as the “Gunhouse version”, employs digital typography colored in #ffff00 to signify the proportions of “the Golden Ratio”.

Running continuously, the movement of the binary digits are intended to suggest the movement of the tape in Alan Turing’s original conception. The scrolling feature allows the full text to be virtually present within the physical limits of the window frame. The marquee movement displays the entire sequence, flowing back and forth from left to right.

F0.UTM is a variable work that has taken several forms since the webpage first went live in 1999, including versions of the source code that are no longer supported by contemporary browsers, altered rates of movement, or distinct changes in background and font color. Verotsko envisions that these variables may continue to evolve in and beyond his lifetime.

“At 92 years old, Verostko has created his genesis NFT specifically for auction at Sotheby’s. For someone who began creating artwork using punched cards, this moment is truly historic.

As befits such an occasion, Verostko has chosen to include a self-portrait that connects with another work that is plotter-based in the auction, bringing to life the Turing code used there in a motion- and browser-based artwork portraying the ancestral logic of all computers live on the computer screen, represented now on the Ethereum blockchain. This cyberspace typographic illumination, in the spirit of medieval manuscripts, is the ultimate matrix code.”

Verostko’s works have been exhibited internationally at the Centre Pompidou in Paris and the Victoria and Albert Museum in London are in museum collections including the Block Museum (Evanston, IL), the Centre Pompidou (Pairs, France), Tama Art University Museum, Tokyo, Japan, the Victoria & Albert (London, UK), the Walker Art Center (Minneapolis, MN), and the ZKM (Karlsruhe, Germany). He has been the recipient of digital art’s highest awards, such as a Golden Plotter Award, and the SIGGRAPH Distinguished Artist Award for Lifetime Achievement in 2009 with Lynn Hershman Leeson.

Over the course of his career, Verostko’s work has appeared in over a hundred exhibitions nationally and internationally, and to date, he has twenty-two published articles on subjects ranging from a 1964 paper on abstract liturgical art to his 1988 ISEA paper identifying the biological analogues to generative art.