Who Were the YBAs?

Sotheby’s Contemporary Art Online sale in London is open for bidding from 31 March to 8 April and features works by YBAs (Young British Artists) Sarah Lucas and Simon Patterson, we look more closely at who the YBAs were and the importance of their work to the evolution of contemporary art.

The YBAs, or Young British Artists, were a group of innovative artists who began exhibiting at the end of the 1980s and rose to international prominence in the 1990s. They represented a new and exciting phase in British art and were considered innovative, entrepreneurial, provocative and irreverent. They appeared during a period when Britain was perceived as lacking a truly vibrant postmodern art culture comparable to the Pictures Generation in New York and the Neue Wildern in Berlin. As a result, they received considerable media and critical attention. Postmodernism’s characteristic traits: appropriation, rejection of fine art materials, preoccupation with spectacle, and the rejection of distinctions between high and low culture, ran through the heart of much of the YBAs' work, and ensured that it quickly became part of the global conversation.

They were known for their extreme openness to creating art using many different, often non-art materials — from crushing found objects with a steam roller to preserving dead animals, to the development of the artistic installation — and for their willingness to shock. Works by the YBAs are among some of the best known and controversial in modern art history, with Tracey’s Emin’s My Bed — her own bed, littered in used condoms, tissues and underwear, exhibited as an artwork — and Damien Hirst’s The Physical Impossibility of Death in the Mind of Someone Living, more commonly known as simply ‘The Shark’, in which a dead shark is suspended in a tank of formaldehyde, among the best known.

The majority of the YBAs graduated from Goldsmith’s College with a BA in Fine Arts between 1987 and 1990. The 1988 Freeze exhibition organised by Damien Hirst played a major role in launching many of the young artists’ careers. However, it was the Sensation exhibition at the Royal Academy of Arts in 1997 — an exhibition comprised from works in famous art collector and advertising mogul Charles Saatchi’s art collection — which really established the YBAs as both a recognised artistic movement and a brand in its own right. While many of the most notorious works by the YBAs were already known, this was the first time such a wide audience was able to see them, while their association with Charles Saatchi lent them a new sense of importance. The controversial nature of the works — particularly Marcus Harvey’s Myra, an image of child-killer Myra Hindley — created a media frenzy, and put the YBAs at the epicentre of the ensuing storm of criticism and debate.

Sarah Lucas’ iconic and surreal self portraits are instantly recognisable as icons of the heyday of the YBAS. While the YBAs gained recognition for their confrontational and controversial work, Lucas’ practice retains a playful tone. In the present work, the artist’s figure is central, with an unapologetically strong stance, clad in a leather jacket, a neat row of bright white knickers adorning the background of this dreamlike forest scene. Entitled Self Portrait with Knickers, here the artist playfully questions conventional notions of portraiture, gender, modesty, and voyeurism.

The Great Bear is Simon Patterson’s most recognisable work. Executed in 1992, the work re-envisages the London tube map with names of various celebrities and cultural figures. Through this mapping of individuals, Patterson questions our cultural order systems in a distinctly British way. Another impression of The Great Bear was included in the Charles Saatchi’s ground-breaking Sensation exhibition of 1997, while another impression remains within the Tate’s permanent collection. 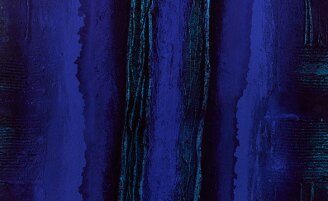