Universal Abstraction Throughout the Twentieth Century

History teaches us that the goal of Abstraction in art was modern and utopian, that its aim was to create a universal language whereby art, through an essential reduction of form, would become a radically pure means of communication. Turns out, this universal language wasn’t universal at all. It was European in its earliest form – although the pioneers of Abstraction owed a significant debt to a global array of influences, from Chinese landscape painting, to tribal sculpture and even bits of pre-Modern Western art.

It has been written into the annals of art history as originating in Europe and developing into a tradition overtaken and championed by the American artists of the post-war era. But this is a narrow viewpoint, and is being proven as such by scholars and museum curators who are increasingly turning their attention to the oft-neglected parallel strains of innovation in Abstraction that were occurring in places such as Latin America and Asia.

When compiling the marquee evening sales for the May season at Sotheby’s, our specialists from various collecting categories – from Impressionist & Modern Art, to Latin American Art and Contemporary Art – strove to construct a meaningful dialogue amongst highlights from their respective sales, taking a broader and more international approach to the history of Abstraction.

While many of the artists and works that have been designated to represent this collective narrative are widely-regarded and perennially celebrated – among them Pablo Picasso, Gego, and Agnes Martin – others are less familiar in the context of a New York evening auction. Many of these artists, such as Takeo Yamaguchi and Mira Schendel, have long been supported by institutions and forward-looking private collectors, and we felt that now was a good moment to introduce some of their best work to the market.


On the most basic level, the history of Abstraction is described by a continuing movement toward the reduction of form. In our Western-centric worldview, this history is often reduced  to a linear progression straight from the European traditions of Cubism, Constructivism and Suprematism at the turn of the twentieth century to the American innovations of Abstract Expressionism and Minimalism in the post-war period. This simplistic chronology, however, fails to account for narratives taking place around the world. At the same time as Abstract Expressionism and Minimalism were taking root in the United States, artists around the world, from a wide variety of cultural traditions, were reinterpreting the groundwork laid by their European forebears to create their own languages of Abstraction. When evaluated together, the various global strains of artistic development toward Abstraction in the twentieth century form a far-reaching and strongly bonded web of influence and inspiration.

This wordless dialogue across borders is perhaps best witnessed through an evaluation of the tradition of Geometric Abstraction, which initially emerged as the logical conclusion to the Cubist destruction and reevaluation of the conventions of form and space. Initiated by Pablo Picasso and Georges Braque, Cubism was a fundamental influence on later generations of Abstractionists; Picasso’s 1911 painting Palette, Pinceaux, Livre de Victor Hugo in the Impressionist & Modern Art evening sale is a spectacular example of this groundbreaking aesthetic.

Out of Cubism came an even more dramatic reduction of form and consolidation of space  with the rise of Suprematism, championed by Kazimir Malevich, whose painting Supremist Composition With Plane In Projection from 1915 is also a featured highlight of the Impressionist & Modern evening sale. The technical and conceptual breakthroughs of artists such as Picasso and Malevich – which were followed and built upon by Dada artist Kurt Schwitters and Surrealists Jean Arp and Joan Miró – became the core building blocks for the subsequent advancement of Abstraction.

The pioneering developments of the first generation of European abstract artists were absorbed and represented in a number of equivalent artistic evolutions throughout the course of the twentieth century, many of which can be seen across the Contemporary, Impressionist & Modern, and Latin American evening sales at Sotheby’s this month. In Japan, the influence was palpable: Takeo Yamaguchi’s 1959 painting Yellow Eyes in the Contemporary Art evening sale is strongly evocative of Malevich’s stark geometric style. In Eastern Europe, artists including Blinky Palermo similarly embraced a hyper-reductive aesthetic with works such as his phenomenal Rot/Gelb. of 1968, wherein he united the legacy of European Abstraction with the concurrent domination of Minimalism.

Agnes Martin, represented by her superb painting Untitled #13 from 1980, worked directly  from this tradition in the United States, creating a career-long body of work that celebrated  the simple elegance of gridded spatial organization and subtle tonal variation. In Latin  America, transformative artists including Gego took a European consideration of alternative interpretations of space into the third dimension, creating stunning iron wire constructions such as Columna Reticulárea (1969), which will be offered in the Latin American Contemporary Art evening sale. One of the most significant artists of the post-war period across multiple cultural traditions and one of Gego’s contemporaries was Mira Schendel, whose major 1966 hanging sculpture Untitled, From the series Droguinhas (Little Nothings) we have chosen to present in a new context for her work, the Contemporary Art Evening Auction. She was the subject of an incredible retrospective at the Tate Modern in 2013-2014, and this work is a superb example from probably her most sought-after series.

Placing figures such as Mira Schendel and Takeo Yamaguchi in the context of other Contemporary abstract artists more typically seen in New York evening sales such as Frank Stella, Cy Twombly, Yayoi Kusama, and Lucio Fontana is emblematic of the aim of this project: we want to reinforce the fact that the impulses and motivations of Abstraction were, and continue to be, potent enough to traverse the boundaries of place and culture. Perhaps, in retrospect and with a closer look, the language of Abstraction really has been universal  all along. 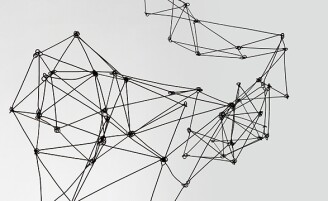