The Surrealist Art Evening Sale (London, 28 February) is led by two masterpieces by Salvador Dalí, Gradiva and Maison pour érotomane. Both works share an illustrious provenance, having remained in the same prominent Argentine family collection since they were acquired directly from the artist by a noblewoman born Maria de las Mercedes Adela Atucha y Llavallol. Through her marriage to the Count Cuevas de Vera she became Countess de Cuevas de Vera, but was known to everyone by her nickname Tota.

TOTA CUEVAS DE VERA ON THE PORCH OF HER HOME. PHOTOGRAPH BY JOHN PHILLIPS.

She came from a cultured Argentine family and divided her time between Buenos Aires and Europe, particularly France. Her parents’ Buenos Aires residence was designed by the celebrated French architect René Sergent who, in addition to working for a large number of aristocrats worldwide, also worked on several landmark hotels such as the Savoy and Claridge’s in London. The fact that Tota’s parents commissioned Sergent to design their family home speaks of their avant-garde style and their pioneering role among Argentine modernist circles.

It was through a family friend, the Chilean silver heiress Eugenia Errázuriz, that the Countess met a number of leading artists who would become her friends. These included Dalí, Picasso, Cocteau, Giacometti, Max Ernst, Le Corbusier, Man Ray and many other creative figures active in Paris in the 1920s and 1930s, including the film-maker Luis Buñuel.

SHE USED HER CONSIDERABLE CHARM TO MAINTAIN A DECISIVE INFLUENCE ON THE CAREERS AND PATHS OF POETS, MUSICIANS, CINEASTS AND ARTISTS IN GENERAL. SHE WAS VERY MUCH PART OF THE SURREALIST WORLD

Painted in 1931, Gradiva is a jewel-like composition that unites Dalí’s unique painterly vision with the technical virtuosity characteristic of his early Surrealist art. Executed with minute, painstaking details, the work depicts a semi-nude woman, acknowledged by the title as the mythological figure Gradiva, the eponymous character from Wilhelm Jensen’s 1903 novel. The identification of the woman as the mythical Gradiva deepens the wealth of associations surrounding the composition and captures the essence of the Surrealist paradigm. Encapsulating the fascination of artists with their muses as objects of desire, it is a continuation of the romantic tradition of ideal beauty as guiding the choices and artistic manifestations of the male artist.

In the novel, a young archaeologist becomes obsessed with a female figure depicted in a Roman bas-relief to the point in which he falls in love with her and imagines her as real. Subsequently examined by Freud as a study of the idealisation of beauty and notions of projected and real love, the subject of Gradiva has provided the basis for seminal texts of psychoanalysis and postmodern philosophy. It is the polarisation of the themes of strength, power, beauty, sexuality and female fragility that fascinated the Surrealists in their incessant preoccupation with the subject of women.

The name Gradiva was particularly resonant with Dalí, who adopted it as a nickname for his wife Gala, whom he met in 1929 when Gala and her husband Paul Eluard came to Cadaqués to stay with Dalí. It was love at first sight and Gala would soon assume a central role in Dalí’s private and artistic life.

SHE WAS DESTINED TO BE MY GRADIVA, “SHE WHO ADVANCES”, MY VICTORY, MY WIFE.

The second work Maison pour érotomane also dates from the height of Dalí’s Surrealism and depicts a Catalan landscape, its rocks metamorphosing in front of the view’s eyes into a fantastical, dream-like image, dominated by two entities. The one on the left appears to be a horse rising from the ground, its extremities seeming to transform into a cello and a car. Two spear-like shapes penetrate the form on the right, which in turn appears to be an intangible, yet somewhat anthropomorphic rock. It was such hallucinatory compositions, giving a visual manifestation to the realm of the subconscious, that so impressed Sigmund Freud, who first met the artist in 1939.

The horse recurs in several paintings and a number of drawings of this period, and over the next several years would become one of Dalí’s main themes, developed in the series Chevalier de la mort. The car is also a recurring theme in Dalí’s iconography. Arguably its most famous incarnation in Dalí’s œuvre was in the shape of Taxi pluvieux, an actual taxi occupied by several mannequins covered by live snails, which was first displayed in 1938 in front of Galerie Beaux-Arts in Paris for the Exposition Internationale du Surréalisme.

The two anthropomorphic rocks are related to the famous 19th-century painting L’Angélus by Jean-François Millet, which inspired a number of Dalí’s works from this period. In some compositions he makes a direct reference to Millet’s masterpiece, placing two figures in a Dalíesque landscape. In the present work the allusion is less overt, the two figures having instead been transformed into gigantic rocks that dominate the surrounding landscape.

The right-hand rock, standing for the female figure, is depicted in profile with her head slightly bowed, echoing the original pose of the peasant woman. Furthermore, her shape is penetrated by the spears that extend from the body of her male companion. At the same time, the male and female figures symbolise Dalí and his wife, who had met several years previously. By transforming the Catalan rocks into anthropomorphic and sexually charged images, the artist eroticises the landscape that witnessed his first delirious encounters with Gala.

These two works, acquired directly from the artist by Countess de Cuevas de Vera, have remained in her family to this day, and will feature in the Surrealist Art Evening Sale in London on 28 February. 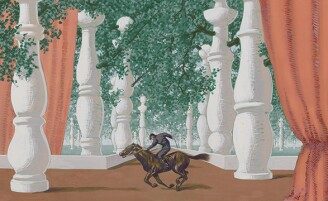