Three of a Kind: Sculptures by Paul Troubetzkoy

P rince Paul Troubetzkoy was a renowned portraitist who captured the glittering world of the international elite at the turn of the 19th and 20th centuries. Troubetzkoy had aristocratic origins - his father was a Russian diplomat and his mother an American opera singer. He was born at the Lake Maggiore in Italy but spent his professional life in the cosmopolitan centres of Moscow, Paris and New York city, where he liaised with fascinating people, including poets, artists, and socialites, who became not only his friends but also the sitters for his portraits.

Surrounded and influenced by innovative sculptors such as Auguste Rodin, Giuseppe Grandi, and trained by Donato Barcaglia and Ernesto Bazzaro, Troubetzkoy was able to create a style of his own, without a trace of symbolism, which was predominant in the 19th century. He modelled with great fluidity and virtuosity which enabled him to create intimate portraits and to capture the impression of a moment.

Troubetzkoy’s unconventional attitude was appealing to the social elite who probably much desired to be eternalised in his fashionable sculptures. Consequently, Troubetzkoy created the new concept of the “society portrait”.

The present bronze shows Carlo Bugatti, a distinguished Italian designer and father to Rembrandt Bugatti, who is known for his animalier sculptures and was also friends with Troubetzkoy. Bugatti is wearing his signature attire and stands in a formal pose. It is an exemplary statuette for Troubetzkoy’s ability in modelling through his slick cut and shape.

Arturo Toscanini was a legendary conductor and one of the most celebrated musicians of his time. The present plaster model encapsulates Troubetzkoy’s virtuoso genius as a portraitist, showing clear traces of the artist’s tools and hands.

This bronze is exemplary of Troubetzkoy’s trademark statuettes: a society portrait of a seated figure. Troubetzkoy mastered the pose by sculpting his subjects with an ease and informality that exudes charm. The elegant model, with her long neck and limbs, resembles Troubetzkoy’s celebrated portrait of Marchesa Luisa Casati, which he executed a year earlier. 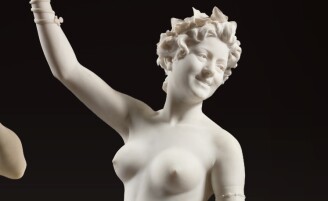