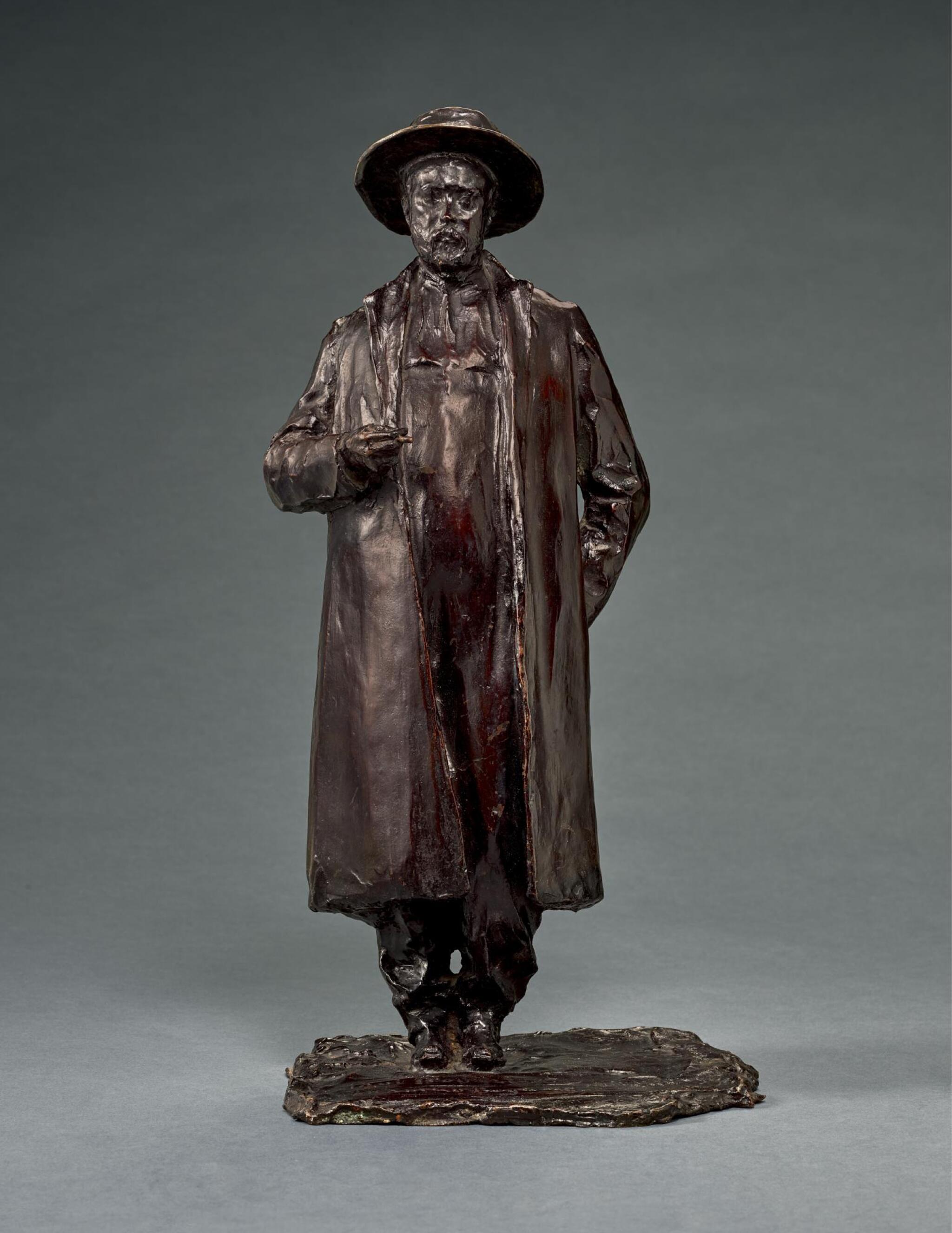 The base and front of the bronze has a dark red-mauve-brown patina which may be later and is brittle and flaked in places notably on the right arm, hand and cigarette, on the stomach, left thigh and knee, and is worn in numerous places on the coat and around the rim of his hat. There is a darker more shiny patina on the front bottom left edge of the coat, which continues onto his legs and feet, and is also noticeable around his right arm, running down his coat under his right arm and on to the trousers. There is more extensive wear to the patina on the left side of the coat and around the back and on the back of the legs, which reveals a more modulated orange-brown, slightly green patina. There are numerous surface scratches throughout. There are marks on his left hand and on the base next to the foundry inscription where a walking stick has been lost. There is old dirt around the collar and in between the feet and on the base. Otherwise the condition is good, with dirt and wear to the surface consistent with age.

Please note that this bronze may be a posthumous cast, or made in the last decade of Troubtezkoy's life, from the 1899 Robecchi foundry cast. Therefore the description in the catalogue should read After Prince Paul Troubetzoy.

With his Russian and aristocratic origins, his travels around the world and residing for some time in Italy, Prince Paul Troubetzkoy is considered a fascinating personality of the 19th and 20th century. In his sculptures he captured figures from the glittering world of the international elite as well as artists, poets and friends, such as Gabriele d’Annunzio and Rodin.

The present portrait is exemplary of the sculptor's genius as a portraitist. The bronze shows Troubetzkoy’s friend and distinguished Italian designer, Carlo Bugatti, in a standing pose. Troubetzkoy had always been close to Carlo Bugatti and his family, especially his son Rembrandt, so much that he portrayed him in another of his sculptures, now visible at the Museo del Paesaggio in Verbania (inv. no. 38).

The statuette of Carlo Bugatti, in a formal pose, is a fine example of Troubetzkoy’s ability in modelling the material through his slick cut and shape, especially visible in Bugatti’s coat and hat. Troubetzkoy has depicted Bugatti in his signature attire with very high-waisted trousers, held in place just under the arms by short suspenders, and covered by a long coat. Apparently Bugatti designed this distinctive garb due to medical problems that prevented him from belting trousers at the waist (Pappers et al., op. cit., p. 15).