By Sotheby's
Rufino Tamayo's Sandías, 1980 is a highlight of the upcoming Impressionist & Modern Art Evening Sale (14 May 2019, New York). We wish to thank Anna Indych-López for her assistance in researching this work.

W riting in 1948, the Mexican poet Xavier Villaurrutia suggested that the Tamayo’s representations of fruit are “charged with a magical symbolic power,” yet removed from the anecdotal or the illustrative to formulate a lyric poetry in paint. Villaurrutia connects the potency of Tamayo’s still lifes of fruit with the early foundations of the artist’s vanguardism in Mexico, as he positioned himself in search of lifelong “essential formal values” in painting that contradicted the dominant historical and didactic themes of the Mexican Muralist movement.

Still life provided Tamayo with the means to explore the problems of plasticism that he felt other Mexican artists neglected. Tamayo embraced the genre as a means to explore questions of color, line and composition in direct opposition to what he considered the propagandistic art that was being promoted in Mexico. It allowed for artistic experimentation and a way to renew the painter’s craft.

In regard to the enigmatic quality of Tamayo’s paintings of fruit, scholar Karen Cordero Reiman states that:

The fruit does not appeal to our imagination of taste or smell…the configuration seems fixed, frozen, deliberate…like a theatrical tableau, and the objects acquire an eerie, power as things

Although initially influenced by De Chirico, Matisse and Picasso in his elaboration of still lifes that juxtaposed multiple objects including various fruits such as pineapples, oranges and bananas, the atypical watermelon slice(s) soon became a favored thematic motif and persisted for decades as one of Tamayo’s most celebrated iconographies. Many scholars have associated Tamayo’s preoccupation with fruit and watermelons with visions of a Mexican imaginary; they suggest that watermelons were critical to Tamayo’s formulation of a universal style of painting which distilled the essence of lo mexicano (what is Mexican) through aesthetic values of the objects of daily life.

Notably, here Tamayo depicts the fruit sans its characteristic black seeds, concentrating instead on its red, pink and white flesh. Even the green rind of the fruit is reduced to a minimum so that Tamayo can focus on an efflorescence of different hues of red, which are set against a background that swells with a proliferation of mauves, deep purples, hot pinks and dusty rose.

Discussing his restricted palette as an opportunity to explore the subtleties of color, Tamayo remarked that:

As we use an ever smaller number of colors, the wealth of possibilities grows. Pictorially speaking it is more valuable to exhaust the possibilities of a single color than to use a limitless variety of pigments.

Tamayo marshals these swirling colors to become active elements in the painting, scratching into the canvas with the handle of his paintbrush and adding sand to his pigments not only to give texture to his painting, but also to materialize color itself an object. The stippled effect animates the surface of the painting evoking a sense of touch as well as a host of tensions characteristic of Tamayo’s work, including the play between flatness and depth and between geometric precision and informal expressivity. 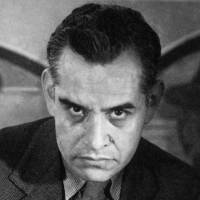 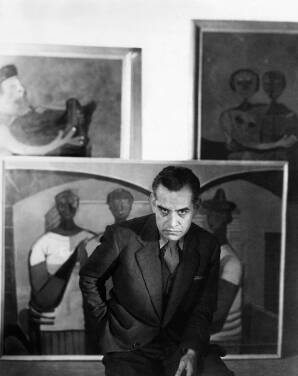