The Story of Tiaras: A History of Elegance

T oday, tiaras are most closely associated with crowns and other royal regalia but, throughout history, they have taken many forms, from wreaths of twisted branches to striking bandeaux style headpieces of the Art Deco era. Unlike a crown, tiaras don’t surround the entire head and can sit close to the eyebrows or further back, so they scoop just above the ears.

The Stunning Tiara from the House of Savoy

They’re typically adorned with coloured gemstones, diamonds and pearls, and crafted in precious metals that reflect the fashions of a particular point in time. They’re often intimately connected to famous individuals and families throughout history, such as Napoleon and his wife, the Empress Joséphine Bonaparte, the British royal family, and the House of Savoy.

Tiara design gives us a glimpse into the tastes of history’s wealthiest and most influential, especially among the royal courts of Europe and their respective royal families. Every time Garrard updated or restyled a tiara for the next generation of British rulers, we can see changing aesthetic values committed to metal. Similarly, having made more than 2,000 tiaras in its history, Chaumet has been privy to centuries of evolving headdresses that serve to cement power and status.

From the 18th century onwards, tiaras were the pinnacle of a fine jewelry parure. The Romanticism movement at the end of the century led to natural and garlands motifs, which then lead to a rise in popularity with the traditional Russian Kokoshnik and its straight and tall ‘wall’ of precious stones.

By the Edwardian era, known in Europe as La Belle Époque, the meteoric rise of brands like Cartier and Van Cleef & Arpels saw tiaras fashioned for royals, aristocrats and socially ambitious elites who wanted to impress at balls and banquets. This continued well into the 1930s, where the bandeaux adopted the geometric leanings of the decade in many Art Deco examples.

After the Second World War, the tiara slowly re-emerged as the prerequisite of Queens, princesses and Hollywood starlets, more recently given their moment in the spotlight at Royal weddings, such as the marriage of the Duchess of Cambridge, the Duchess of Sussex and Princess Eugenie.

Today, tiaras are enjoying a remarkable resurgence at auction, perhaps because of their exclusivity, craftsmanship or their often-remarkable provenance.

The fact that tiaras of the 18th, 19th and 20th centuries were made-to-measure adds to the intimacy of surviving examples. These adornments would have inspired confidence as the doors of a ballroom were opened, revealing countless eyes ready to make a fashion assessment. A tiara was not simply a headdress, but a statement.

One can only imagine the reaction of Maria Vittoria dal Pozzo when she was presented with a natural pearl and diamond tiara on her wedding day to Amadeo I of Savoy, who later became the King of Spain, in 1867. This tiara, which has remained with the family for over 150 years, is believed to have been created by Musy Padre e Figli, Court Jeweler of Turin, and one of the oldest goldsmiths in Europe.

It is composed of graduated scrolls of diamonds, framing 11 baroque drop-shaped natural pearls of significant sizes. When this piece is presented in Geneva on 11 May, it will become one of the most important tiaras to appear at auction in recent decades.

It is also worth noting that descendants of the House of Savoy and the former thrones of Italy continue to own many impressive tiaras, such as a piece commissioned by Queen Margherita of Italy in 1904, which is now worn by Marina Doria, the Princess of Naples, and the Savoy Pink Tourmaline tiara gifted to Princess Elisabeth of Saxony on her wedding day in 1855, which was most recently worn by Clotilde Courau, Princess of Venice, for the occasion of her marriage to Prince Emanuele Filiberto in 2003.

The ‘Musy’ tiara is an excellent example of the changing tastes of 19th century elites, who were beginning to covet tiaras as wearable evidence of extraordinary wealth and status. In 1804, Napoleon was crowned Emperor of the French and his wife, the Empress Joséphine, wore a tiara for the occasion as a symbol of sovereignty, kickstarting the notion that tiaras were essential court attire.

His personal tastes were eccentric and largely inspired by ancient Rome, resulting in a flurry of classical tiaras and some set with carved stone intaglios and cameos.

Over in England, classical and naturalistic tiara styles were fashionable, as were en tremblant adornments and coloured gemstones that made quite the impression in candlelight. It was during this century that brides began to wear tiaras over their veils for wedding ceremonies, again sparking a desperate desire to own one if not multiple parures to suit different occasions.

When Queen Victoria ascended the throne in 1837, the love she had for her gemstones and jewels was only matched by her husband, Prince Albert, who took great interest in the art and science of jewelry-making and had a liberal attitude to bespoke commissions! An example would be the Oriental Circlet tiara, crafted by Garrard, with opals and diamonds set in high arches (the design of the tiara was eventually changed by Queen Alexandra, including replacing the ‘unlucky’ opals for rubies).

Of course, tiaras were not exclusively a fixture of French and English courts. In fact, they were worn abundantly across Europe and in Russia where the most fashionable of women wore tiaras especially designed to match the colours of their gowns. The Russian kokoshnik – a traditional folk costume – led to two signature tiara styles of the 19th century, the halo and the fringe, which were almost universally popular across Europe and great examples were created well into the 20th century. The Arts and Crafts, Art Nouveau and Art Deco design movements also spawned their own tiara styles, with newly discovered platinum playing a role.

What’s especially fascinating is the way in which tiaras slipped in and out of focus at times of revolution or social change. Their relationship to extraordinary wealth meant they were periodically set-aside in favour of more diminutive hair ornaments when times were challenging, only to re-emerge when the upper classes felt on a surer footing once again. The advent of World War One, for example, saw tiaras take a back seat.

Some of the most significant tiaras ever sold by Sotheby’s can be dated to the turn of the 20th century. The Donnersmarck Tiara (circa 1900) is composed of 11 exceptionally rare Colombian emerald pear-shaped drops, while the Murat Tiara, created by Chaumet from natural pearls and diamonds in 1920, was owned by a descendant of Napoleon Bonaparte’s sister.

What these pieces have in common, aside from their beauty, is their impressive provenance, something that is shared by Maria Vittoria dal Pozzo’s Musy tiara. As we enter a time of unprecedented demand for antique pieces, especially from collectors in Asia, we are reminded of the tiara’s place in history and its talent for revealing the refined tastes of some of the most privileged Europeans over the last 200 years. 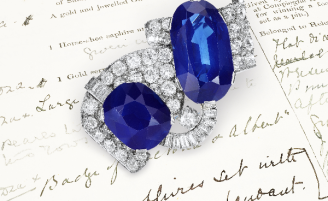