'The Intrepid Mr Roberts' — Watercolours from an Important Private Collection

S otheby's are delighted to present for sale a superb and rare group of watercolours by David Roberts, R.A. that have remained in the same distinguished private collection since they were acquired in the late 1960s and early 1970s.

Roberts was an artist of extraordinary talent, a scintillating draughtsman who was able to capture the grandest vistas, as well as the smallest of details. Born in Stockbridge, near Edinburgh, like many a Scot, he had an ingrained drive to travel and it was this adventurous spirit that saw him rise to the very pinnacle of his field.

As with many of his peers, Roberts extensively explored Britain and northern Europe. In 1832 he considered following the crowd once again by making a tour of Italy. However, inspired by the possibility of experiencing the then much less well known landscapes and architecture of Spain, he instead elected to travel to Andalusia.

While there he took the opportunity to spend a short time in Morocco. This sojourn had a great impact and he later wrote: "I thought Spain great, but this excels all I have seen… The scent from the oranges and citron groves surpasses anything that we sons of the cold north can imagine."

Roberts had long held a desire to travel to the ‘east’ and in 1838 he embarked on an eleven month tour that was not only ground-breaking but career defining. He left London in August and travelling via Paris and Marseilles, he disembarked at Alexandria just under a month later. From there he moved south to Cairo and chartered a boat to take him up the Nile. He was the first professional British artist, travelling independently, to undertake this journey and he marveled at the wondrous ancient sites of Abu Simbel, Philae, Dendera, Luxor, and Karnak. His watercolour, Front Elevation of the Great Temple of Aboo-Simbel (lot 3), captures not only the beauty of this celebrate site, but also records the Temple whilst it was still partially obscured by sand.

On 7 February, after two further months in Cairo, he set off into the desert, accompanied by an interpreter, fifteen Bedouin from the Benisaid tribe, twenty-one camels and two fellow Scots. Roberts and his compatriots wore local dress, partly to protect themselves against the harsh conditions but also to disguise the fact that they were foreign.

By 10 February the party had reached Suez, where they cooled off in the Red Sea. Lot 5, Suez, shows this very scene, with Roberts’ party and their camels on the water front. From there Roberts crossed the Sinai desert, to Petra, before heading north, via Hebron and Jaffa, to Jerusalem, where he arrived on 28 March. From Jerusalem he made a number of excursions, including to Bethlehem and the Dead Sea, before he travelled northwards again, first to the great ruins of Baalbek and finally to Beirut.

When Roberts arrived back in Britain in July 1839, he carried with him a portfolio that he felt was "one of the richest… that ever left the East." It contained 272 drawings, ranging from studies of Egyptian temples and Islamic mosques, to Holy Land scenery. These drawings formed the basis for a series of lithographs which, between 1842 and 1849, were published under the title: The Holy Land, Syria, Idumea, Arabia, Egypt & Nubia.

This iconic work caused a sensation in Victorian Britain and secured forever Robert’s reputation as an intrepid traveller and one of the foremost architectural and landscape artists of his time. 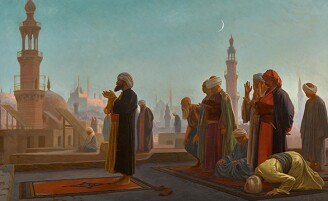