By Roxane Zand
Before the large-scale advent of photography, some of the greatest and most informative visual depictions of Persia and the Orient were in the form of sketches and drawings by European travellers to the region, some of whom also wrote detailed accounts of their journeys. These voyages were invariably difficult, sometimes perilous, but offered fascinating glimpses of local life as it was then, albeit occasionally embellished by the painter with romantic notions of exoticism.

T his April, Sotheby’s is offering a series of exceptional works in its online Orientalist sale, four of which are particularly captivating both for their historical value and artistic merits. A long-forgotten Tehran, for example, is brought to life in two sketches by Jules Laurens, a 33-year-old aspiring artist who had trained in Paris under Paul Delaroche. In 1846 he was given the break of a lifetime by being offered the chance to join a geographical expedition to Persia. Led by the renowned geographer and engineer Xavier Hommaire de Hell, the journey was to turn the dream of an expedition to Tehran via Anatolia into a reality. The trip would last three years and involve severe hardships.

The two travelled to Constantinople, before embarking by sea for Anatolia in June 1847. By August they reached Trebizond, the first stage on their long journey overland to Tehran by way of Erzeroum, Vann, and Tabriz. The trek was long and arduous: despite spending up to fourteen hours a day in the saddle, overnighting in uncomfortable carevanserais, and battling cholera, fever, and freezing temperatures, Laurens assiduously recorded his impressions in his sketchbook at every stop. His sketches were unidealized, making them highly valuable historical records.

In Tehran they were greeted by Comte Étienne de Sartiges, French envoy to Persia, who introduced them to the court of King Mohammad Shah Qajar. On 2 March 1848 Laurens and Hommaire de Hell left Tehran on foot for Isfahan. It would be their last journey together. To escape the unbearable heat, they walked by night. Upon their arrival, Hommaire de Hell’s health deteriorated. He died on 30 August and was buried at the Armenian cemetery in Julfa, in present day Azerbaijan. Returning to Tehran alone, Laurens finally left the city on 8 February 1849. Hommaire de Hell’s journal was published by his widow and a portion of the original watercolours and drawings were given to the Ecole des Beaux Arts of Paris.

Of the hundreds of sketches Laurens made during the journey, many were turned into lithographs for popular magazines and publications, including the fourth volume of Voyage en Turquie et en Perse exécuté par ordre du gouvernement français pendant les années 1846, 1847 et 1848.

Valued for their story as well as their historical significance, these renditions will provide an enchanting visual record for lovers of Persia: Tehran’s vast Central Square, or its perspective from the Qazvin Road with the majestic Damavand range in the background – uniquely recorded for posterity and a rare treasure at this current juncture in modern times. 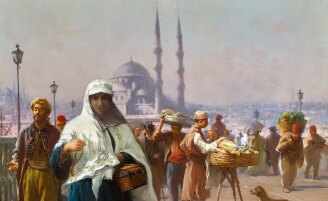