The Colorful Histories of Spring’s Most Alluring Handbags

C olors have played an important role – as signifiers, status symbols and statements of intent – since the dawn of human history. From their use in body art, clothing and jewelry to tools, art objects and interiors, the colors with which we adorn ourselves and our surroundings tell compelling stories; and as one of our most prominent and investment-worthy accessories, the luxury bag speaks volumes. This season, we take a closer look at our five favorite handbag hues to decode their mysteries and meanings.

“I love black because it affirms, designs and styles. A woman in a black dress is a pencil stroke.”

Black – the color we perceive in the absence or complete absorption of visible light – has inspired and challenged humanity since time immemorial.

To the Ancient Egyptians, it was the color of Anubis, the jackal-headed guardian of the dead. In the 14th and 15th centuries, thanks to the discovery of new dyes and dyeing processes, rich blacks emerged as a symbol of power and it came to represent a refined austerity, appropriate to an epoch plagued by the Black Death. By the 19th century, the color was once again in vogue, buoyed by Romantic poets and the Victorian cult of mourning.

In 1926, Coco Chanel transformed womenswear with the radical simplicity of the little black dress, with Vogue hailing it as “a sort of uniform for all women of taste”; iconic black dresses by Christian Dior and Hubert de Givenchy reaffirmed the sentiment.

Today, black remains an anchor of fashionable wardrobes. Its versatility and sophistication make it an exceptional choice for investment pieces like handbags. (Here, fashion influencer Alba Garavito Torre paired her quilted Chanel bag with a punchy sequined, camo bomber jacket, for a modern look.) Deep blacks stand out especially in classic silhouettes: an exceedingly elegant example, this limited-edition black box leather Millennium Moonlight Sellier Kelly by Hermès is available for purchase at our online emporium, a rare opportunity to acquire the coveted bag. 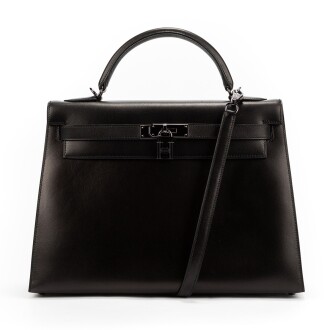 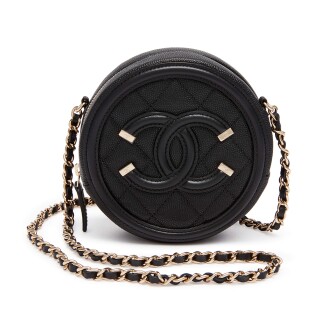 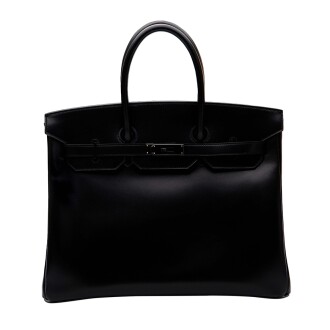 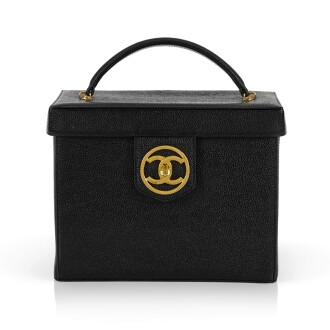 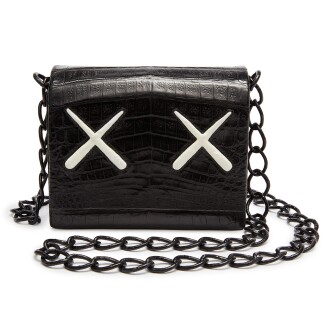 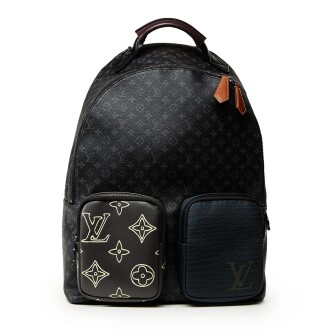 “Blue has no dimensions, it is beyond dimensions.”

The color blue has long been a favorite among artists. Ultramarine, ground from the semi-precious stone lapis lazuli, was used as far back as the 5th century, and became the most coveted – and costly – blue of the Renaissance through its associations with divinity and the Virgin Mary. Centuries later, French artist Yves Klein would patent International Klein Blue, a synthetic interpretation of the original, remarking: “Blue is the invisible becoming visible. Blue has no dimensions, it is beyond dimensions…”

The story of blue in fashion is equally illustrious, stretching back to the ancient civilizations of Peru, Egypt and Mesopotamia, with the use of indigo dye. In the 13th century, King Louis IX of France began regularly wearing clothing of blue, cementing its status as a symbol of nobility. Navy blue – a deep, colorfast blue first adopted in 1748 by the Royal Navy – is an abiding fashion mainstay for its effortless sophistication; in 1954, Christian Dior wrote: “Among all the colors, navy blue is the only one which can ever compete with black. It has all the same qualities.” In 2017, International Klein Blue made its fashion week debut at Céline’s Spring/Summer presentation, which featured recurring pops of the artist’s signature color.

Shades of blue are perennially popular in wardrobe staples – from relaxed denim to crisp blazers, statement jewelry to luxurious bags – and in the world of fine art. In 2016, the renowned street artist KAWS collaborated with Colombian designer Nancy Gonzalez to put his stamp on a capsule collection of leather goods; known for his precise use of color, the artist selected a range of bold hues, including vibrant bright blue, to dazzling effect. The head-turning piece, now available for purchase at Sotheby’s online destination, invokes the color’s power to signal both timeless luxury and exciting modernity. 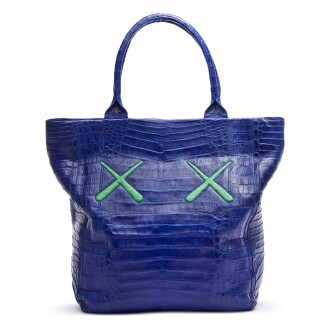 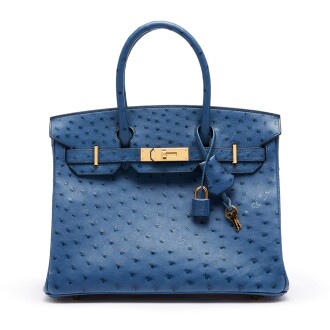 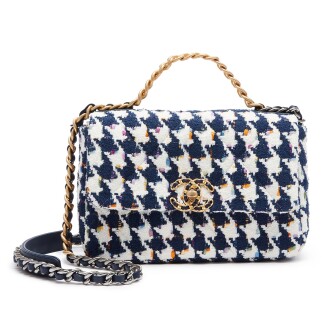 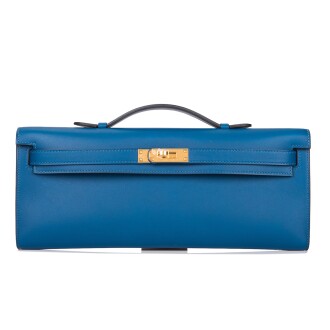 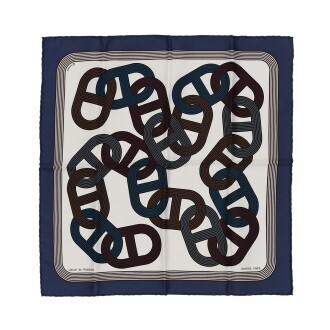 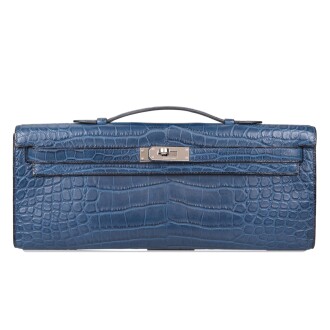 “Anything is possible with sunshine and a little pink.”

Bright, saturated pinks – dazzling in their audacity, and carrying the distinct whiff of rebellion – have historically been linked with equally bold women. A favorite of legendary Vogue editor-in-chief Diana Vreeland, who called it “the navy blue of India,” the color has long struck the Western eye as exotic. One of its most iconic shades, “shocking pink,” was popularized by the Surrealist fashion designer Elsa Schiaparelli, who described it as “bright, impossible, impudent, life giving, like all the lights and the birds and the fish in the world together, a color of China and Peru but not of the West – a shocking color, pure and undiluted.”

Madame de Pompadour, the famed mistress of King Louis XV of France, is associated with her own vivacious shade of pink: “Rose Pompadour,” a lively blush hue named in her honor, invented in 1757 by Sèvres. An influential patron of the arts, she played a primary role in popularizing Sèvres porcelain as the 18th century’s luxury of choice.

Today, bold pinks remain as covetable as ever: Hermès Birkin bags in the rarest pink colorways like Rose Bubblegum – now available for purchase online at Sotheby’s – command some of the brand’s highest prices at auction, and are seen on the arms of international fashion designers, like Anouki Areshidze. Expect to see more of the mood-boosting hue this season: shades of bubblegum and raspberry graced the Spring/Summer runways at Valentino, Balmain and Isabel Marant. 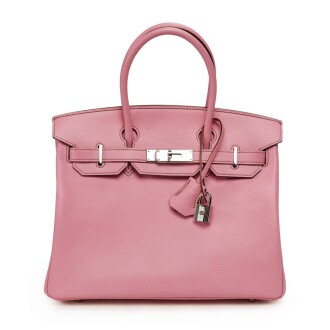 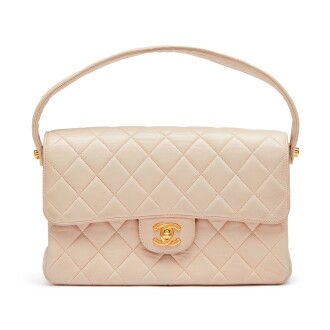 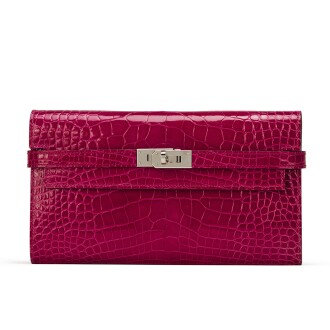 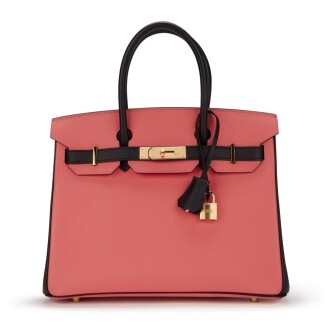 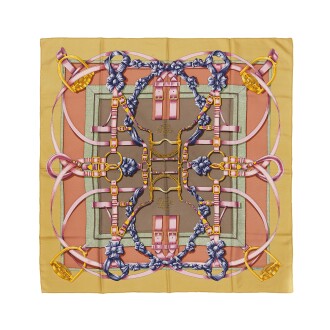 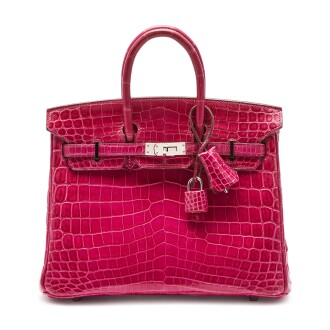 “Red protects itself. No color is as territorial. It stakes a claim, is on the alert against the spectrum.”

Of all the colors, red exerts the most powerful pull on the human psyche: evoking blood and fire, it excites an immediate and primal response. Throughout history, shades of red have conjured a host of associations, from joy and good fortune to danger and death; love and sexuality to anger and aggression. Ancient Egyptians wrapped mummies in linens dyed with red hematite and the Aztec and Inca used brilliant cochineal, laboriously ground from tiny insects, to ornament their leaders.

Artists have historically prized the color. Wassily Kandinsky once described the shade as “a feeling of sharpness, like glowing steel which can be cooled by water.” Associated with power, dominance and victory, shades of red also have a long history in fashion. Beloved by kings, cardinals and generals, crimson garments have been worn as status symbols since antiquity.

In modern history, attention-grabbing reds have proven their timeless allure: from couture gowns in iconic Valentino red to the lacquered soles of Louboutins, the color is as relevant today as it was to our Stone Age ancestors. Because of their visual impact, punchy reds are perfect for accents and accessories; fashion bloggers and style tastemakers are often spotted toting red handbags. In beautiful red lambskin, this luxe round chain clutch from Chanel’s 2019 collection – available for purchase online at Sotheby’s – pairs the eye-catching hue with gold tone hardware to make a dazzling statement. 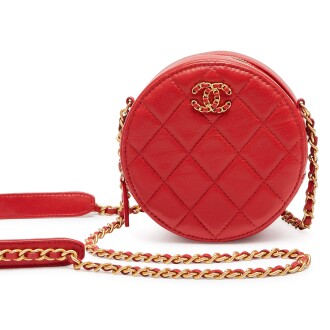 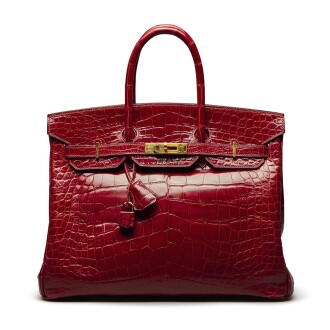 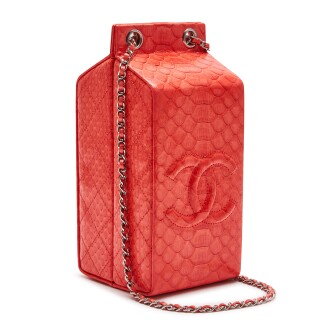 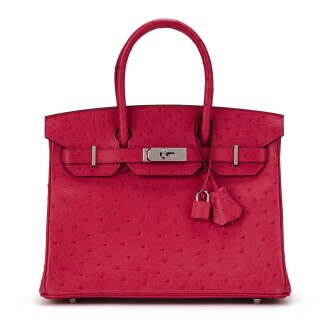 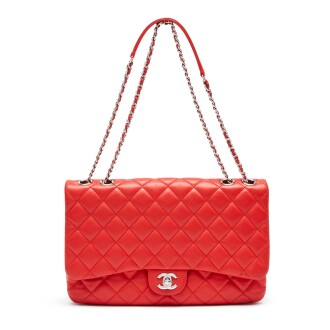 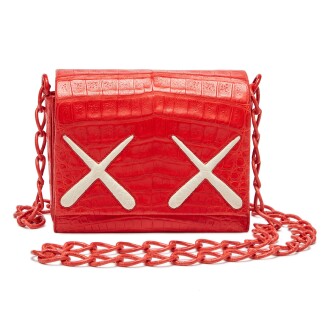 “We love the sight of the brown and ruddy earth; it is the color of life, while a snow-covered plain is the face of death.”

While brown cloth once denoted low social status, brown leather has an entirely different history. People have been making leathers – prized for their durability, versatility and beauty – for at least 7,000 years, and the use of leather accessories as status symbols dates back to the days of Ancient Egypt. Today, leather goods in rich shades of copper, chestnut, caramel and tobacco are synonymous with luxury; seen on the arms of trendsetters like German menswear blogger Louis Darcis, a patterned crossbody dresses up casualwear.

Our modern obsession with leather goods can be credited in part to the English monarchs and their love for horses: from the beginning of organized racing during the court of Charles II to the present day, the sport has long associations with nobility. As equestrian sports became increasingly popular among the leisure class, artisans rushed to meet the need for fine saddlery. In 1837, harness-maker Thierry Hermès opened his Paris workshop, catering to European noblemen; the business would evolve to become one of the most recognizable luxury brands in the world. In 1922, Hermès debuted its first leather handbag, and in 1935, the brand introduced one of its most iconic silhouettes: originally known as the Sac à dépêches, the Kelly bag was renamed in 1956 after the film star and Princess of Monaco, Grace Kelly. Today, the design remains as sought after as ever: a stunning example in exotic alligator leather, this Tricolor Sellier Kelly in Miel, Gris Foncé and Black is now available for purchase on Sotheby’s luxury emporium. 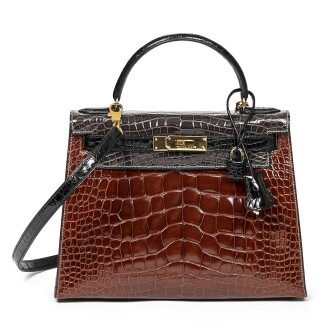 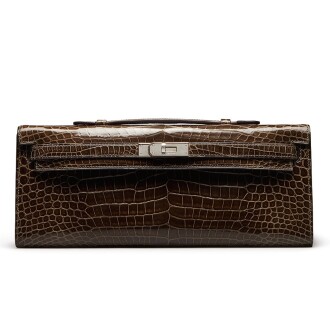 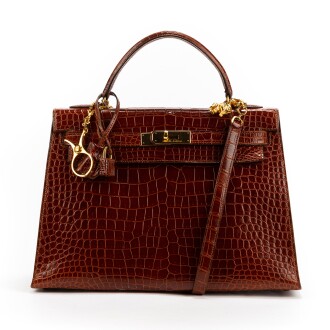 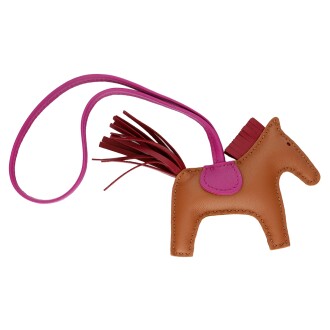