The Collection Of Jean-Claude Bellier

By Luc Bellier | Nov 23, 2021
Son of Alphonse Bellier, a leading auctioneer of the 20th century, and Renée Deville, a lyrical artist, herself the daughter of a renowned tenor of her time, executor of Ker-Xavier Roussel's will, godson of Edouard Vuillard, friend of Jacques Kerchache, tireless explorer and organiser of international exhibitions of early art, Jean-Claude Bellier was one of the youngest experts in the French courts and a lifelong lover of beauty.

Son of Alphonse Bellier, a leading auctioneer of the 20th century, and Renée Deville, a lyrical artist, herself the daughter of a renowned tenor of her time, executor of Ker-Xavier Roussel's will, godson of Edouard Vuillard, friend of Jacques Kerchache, tireless explorer and organiser of international exhibitions of early art, Jean-Claude Bellier was one of the youngest experts in the French courts and a lifelong lover of beauty.

Jean-Claude Bellier had two exceptional tutelary figures. The first was Alphonse, his biological father, of course, who reigned with extensive boldness as king of the auction when Paris was the art world capital. The second was a man who was an elder to them both, Edouard Vuillard – friend of the father and godfather of the son –, a magician artist who considered the development of sensitivity more important than the unfurling of the imagination.

Born in 1886 in the port city of Saint-Nazaire to a hatter father, Alphonse came to Paris with precociously acquired law degrees. At the time, that Holy Grail held promise for a lively mind eager to work. His father thought he had already become a notary public. However, he overlooked the artistic tendencies of that brilliant pianist who – with unfailing optimism, charm, a cheerful disposition, curiosity and a craving for adventure and new encounters – was ready to greedily devour the metropolis. After years of mingling with the sharpest minds of his time, each of whom he befriended, he needed time to borrow the money that he didn’t have. He officially established his business in 1920, after purchasing a modest auction house which would bear his name on 2 Place Boëldieu. With the art market on the rise, the seats were expensive but the house was always full. The galleries got the best seats, and the auction business dealt in the centuries past, with a ferocious competition for the 18th century. But the virtue of art is that it is not a dictatorship. Freedom and innovation have written its history. And being friends with the likes of Pablo Casals, Felix Fénéon, Paul Eluard, André Breton or Charles Ratton – as well as a bourgeoisie more spiritual than “settled” – Alphonse Bellier’s eagerness for “novelty” in all its forms led him to lead a “revolution” in a world that demanded nothing less. He turned out to be “the right man in the right place at the right time” as the American saying goes. And quickly after beginning, he set out to fulfil his intention to bring works by “contemporary” artists to auction, despite the fact that they were still being ridiculed at the time.

Alphonse Bellier held a plethora of historic auctions over nearly four decades. Let us mention those of John Quinn, André Breton, Paul Eluard, Jules Strauss, Max Silberberg, the “Cahiers d’Art” collection, G. De Miré, Georges Bernheim, the Duke of Trévise, Félix Fénéon… And Gabriel Cognacq, right up to the Regnault auction relocated to – and televised from – Amsterdam. That event featured the first remarkable appearance of a bidder by the name of Ernst Beyeler. His talent as a showman and auctioneer remain unparalleled, and they helped his ideas gain popularity. He had an old-fashioned integrity, always putting the interests of his clients above his own. That is told in the Memoires of the collector Pierre Lévy, one of my grandfather’s followers; and the Musée de Troyes will be forever thankful for the donation of his entire splendid collection. For his descendants, he observed the same consideration as that which had governed his career, settling the inheritance expenses for his estate during his lifetime. Jean-Claude Bellier, born in 1930, was the third child of Alphonse’s second marriage with the opera singer Renée Deville. The couple continued their life together until Renée died in 1972. The estate included an exceedingly fine collection of Rodins, Impressionists and their “heirs”. Frank Lloyd, founder of the famous Marborough Gallery, sold off almost all the pieces for the two eldest children. Jean-Claude Bellier chose to take over the business, but after having affronted his father by turning down the opportunity to purchase Bennett Park in the United States, he could not see himself as a ministerial officer. He would become an art dealer, art promoter and art expert. And indeed he was the youngest throughout three of the area’s three jurisdictions. After two months at the Marlborough Gallery in London, he collaborated with Raymond Nacenta to hold exhibitions of the new School of Paris at the Galerie Charpentier in the context of the emerging abstraction that was sparking debate. In 1958, Alphonse was officially retired, but he came to his son’s gallery – inaugurated in 1960 with a superb Bonnard exhibition – on a daily basis, and he lived to an advanced age until passing away on 1 November 1980.

Today both of them rest in peace at the La Baule Escoublac cemetery. Jean-Claude Bellier had a studied eye for modern art, before and after the Impressionist revolution. Moreover, he had the lucidity to back up his research with a vast library, and to share the doubts and intuitions that he undoubtedly had with others in the know. A great testament sealing this friendship spanning two generations was the discovery that a picture of faded flowers unearthed by a lady at a second-hand shop was in fact a poignant and especially authentic Van Gogh painting from the autumn following his arrival in Paris. He was already absorbed by his insatiable appetite for “anything new” that he could find, and he went on to become one of the greatest geniuses of modern art within four years. In human terms, Jean-Claude Bellier was an embodiment of the Glorious Thirty. Unemployment was not an issue then, with the constant economic growth. His mother, who had managed to prosper, contributed to his wealth just as much; but his career was especially guided by his own desire and curiosity. His noble anarchist mind was enlightened after years with the Jesuits, where he met his lifelong friend Philippe Noiret. It must be said that in the 1960s he began to assemble an extraordinary collection of tribal art. While it would be presumptuous to describe it as the greatest of his time, the collection was certainly one of the three most prestigious in the world. His children grew up among these very impressive objects. But perhaps the visual arts were not what most inspired his progeny, but rather his unshakeable ability to appreciate the most diverse aspects of it. He would discover all the music that he would be bold enough to support – Fats Waller and Charles Trénet – and was fascinated by the cinema, including John Ford in his heroic Westerns, Fred Astaire, and the first Tarzan films. He explored the treasures of comic books, which were not yet considered the 9th art. And like the Ancient Greeks, he initiated us to the virtues of all the sports. That was why he woke us up in the middle of the night to watch the iconic Muhammad Ali face off with “Smokin’” Joe Frazier. And what could better express his hope for humanity than that other nocturnal rousing in 1969, to watch on a trembling screen as the most beautiful and utopian page of man’s history unfolded? The Belliers were revered at La Baule, and Alphonse – unchanging in a suit and tie – was the “master” of them all, for all time. A number of painters and friends were swept along in all the ceaselessly improvised festivities, and among the visitors, the prestige of a certain Charles Ratton remained in lasting memory. Then there was Jacky Kerchache’s poignant memory of coming with his parents each summer to join this community for whom joie de vivre was a way of life. For everyone, and for his children, our father was a master of ceremony before his time who remains in a class of his own. 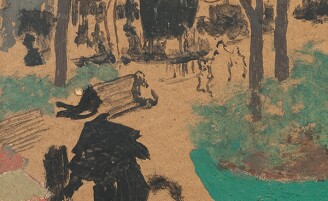