The Bracelet That Weathered a War

This bracelet, which features in the upcoming Fine Jewels sale (20 March, London), was purchased in Prague in the late 1930s, and is an eloquent testimony to the complexity of the era. On the one hand, it demonstrates the richness of European decorative arts of these early decades of the twentieth century; on the other, the plight and courage of those who endured the war that followed. It is a piece with a fascinating story.

The smoothly contoured links are classic late 1930s Art Deco: in yellow and rose gold, and of solid, simple construction, inspired by architecture and machinery. However, the details set it apart. Geometric stripes of black and red enamel are juxtaposed with a profusion of delicately carved flowers and leaves in nephrite and chalcedony, accented with rose diamonds. This intricate craftsmanship, combined with an export assay mark from Vienna, immediately brings to mind the work of the famed Austrian jeweller Paltscho.

Ernst Paltscho, known in his native Vienna as ‘Jeweller to the Kings’, originally started working in his father Carl’s jewellery business back in 1881. In 1914 his father moved to the First District, the centre of Vienna, along with business partner Emil Biedermann. Operating under Biedermann & Paltscho, and their customers included well-known Austro-Hungarian aristocrats and the King of Greece. Paltscho's son Erwin joined the firm in 1918, and continued the business after his father's death. He became known for his spectacular jewels set with colourful, beautifully observed flowers in carved hardstones, several examples of which are identical to those seen here.

Combined with the rich gold tones of the links, the flowers also speak of a particularly Viennese aesthetic, epitomised by the works of Gustav Klimt and Egon Schiele, and the all-encompassing decorative style of the Wiener Werkstätte, led by the architect Josef Hoffmann and the artist Koloman Moser. Jewels in this distinctive style are very rare, and the present example is remarkably well-preserved.

At the time of its purchase, the owner of this bracelet was a young student. Her family were Jewish, and lived a quiet life near Prague. Like many Jewish people at the time, she and her family were increasingly concerned by the rise of Hitler in Germany, and were soon faced with a stark choice: to leave their homes behind, or remain and face the risks to come. They looked for ways to weather the political and financial volatility ahead. Portable, valuable and easily concealed, jewellery was their choice.

As their fears began to mount she decided to take time off from her studies to go to a local jeweller, Eduard Riemer, to choose something to invest in. As the assistant showed her an array of different pieces, one stood out - the most expensive in the shop. In the darkening atmosphere of the time, its opulent beauty must have been almost otherworldly.

This bracelet was purchased as a safeguard against the troubles to come.

When war was finally declared, the young student was travelling with friends. Away from Prague at this moment, she had the opportunity to flee, but instead made the extraordinary decision to return to her family.  Their chances of escape now dashed, the bracelet was entrusted to a close friend who agreed to keep it for them during the war.

By her parents’ side, she saw the worst of what the war brought to Europe. The jeweller she had visited did not survive the war. Her friend in Prague however, did. They remained true to their word, and when she returned after the war, the bracelet was there waiting for her.

Her life continued, and eventually she married and settled in England. The bracelet travelled with her, no longer as a portable vessel for wealth, but as a treasured heirloom.

Sotheby’s would like to thank the consignor for allowing us to share the extraordinary story of this artistically and historically significant bracelet. 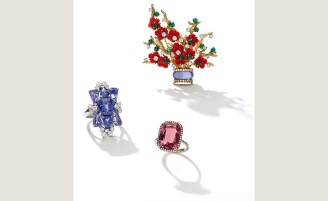