The Bloomsbury Binders: A Christmas Collection

By Paige Thompson
Among the extraordinary material in Sotheby's December 10 auction of English Literature, History, Science, Children's Books and Illustrations Online , is a Christmas collection from the esteemed bookbinders Sangorski & Sutcliffe.

I t was in 1901 that Francis Sangorski and George Sutcliffe, who had met five years earlier at a bookbinding evening course, decided to found their own small business in an attic in Bloomsbury. The start of a new century proved an auspicious time to begin trading: the first entry in their order book was from Charles Robert Ashbee, a central figure of the Arts and Crafts movement, and within a few short years, Sangsorski & Sutcliffe had established themselves as the city’s most desirable binders. Their reputation for the finest craftsmanship and most imaginative designs quickly spread, and soon the firm was supplying its fine bindings not just to the local London trade but to private collections as far as the west coast of America.

By 1911, Sangorski & Sutcliffe were operating from new premises on Southampton Row. The previous decade had seen them develop strong relationships with many of their customers, but none so close as that with rare booksellers, Maggs Bros. The four Maggs brothers – Benjamin, Henry, Charles and Ernest – were the proprietors of one of London’s most respected booksellers, counting the Royal family amongst their customers. As a mark of their importance to the bindery, Sangorski & Sutcliffe began binding a special Christmas book for the ladies of the Maggs family, a tradition which would continue for the next four decades and survive two World Wars and the great Depression.

"Every now and then, like flowers in the desert, they pop up in a sale room or exhibition, but for the most part they are locked away in institutional and private collections, hidden from the public gaze, silent reminders of a very different period in the country’s history."

Rob Shepherd, The Cinderella of the Arts, 2007

As the Christmas of 1911 drew near, the binders began work on the first gift it would make for Florence Ada Maggs, Ernest's wife, a copy of Midsummer Eve. Each design would include her name or monogram.

Of course, only this first gift bears the signatures of both founding partners beneath the dedication. At the start of July 1912, six months after the first Christmas binding, Francis Sangorski was drowned swimming in the sea at Selsey. He was thirty-six years old. He was buried at Marlyebone Cemetery, East Finchley, with the Maggs family in attendance, and his tombstone bore the epitaph ‘Artist and Craftsman’. Until 1943, the signature of George Sutcliffe appears on each Christmas book alone.

Throughout the next forty-four years Florence Ada Maggs was gifted with beautifully illustrated editions of Pride and Prejudice and Cranford, first edition copies of the Winnie the Pooh stories, limited edition publications from William Morris' Kelmscott Press and the Vale Press, the works selected encompass over a hundred years of publishing history.

The influence of Sangorski & Sutcliffe on twentieth century bookbinding cannot by understated. Working at the heart of the Arts and Crafts movement, their workshop elevated bookbinding from a humble craft to an artistic endeavour in its own right. Their bindings remain some of the most beautiful and coveted books in the world, found in the most preeminent collections and preserved as treasures in numerous institutions.

This collection, made for Britain’s oldest family of antiquarian booksellers, is not only testament of a lifelong friendship but provide a unique record of the development of London’s greatest bindery.  A unique piece of the firm’s history, “by any standard, then or now, these extravagant, glittering examples of the book-binders craft were the products of a workshop at the very height of its creative powers” (Rob Shepherd, The Cinderella of the Arts, 2007). 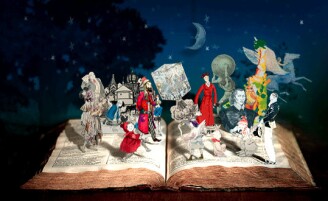