The Awakening of Light

By Sotheby's
Air, water, rock and fire churn in a formidable maelstrom in No. 144 – a magnificent archetype of Chu Teh-chun’s groundbreaking 1960s compositions. Enigmatic and ruminating, the painting cascades from a central axis into swirling unfathomable undulations and topographies of color and texture which are framed on the top and bottom by incandescent light.

C reated in 1963, No. 144 situates at the cusp of a critical shift the artist undertook in the early 1960s – during this period, the isolated geometric shapes and detached black brushstrokes from the 1950s liquesced into pulsing molten abstract landscapes, while rich riotous colors burgeoned from his previous palette of muted black and browns. Standing before No. 144, in which hues of vivid vermillion, deep indigo and brilliant cobalt pierce through a cavernous veil of charcoal black, we move physically through the canvas like a pilgrim journeying to the center of the earth – witnessing the magnificent moment as parched rock is resoundingly split by searing crevices of light and lava. Compared to the preceding No. 140 and No. 143, which employ similar palettes with differing tonal emphasis, the present work exhibits the most sophisticated and nuanced composition in terms of color and texture. Most remarkable are the luminescent turquoise enclosures of light that frame and illume the painting with a transcendent radiance; with its understated yet captivating luminosity, No. 144 is one of the great abstract master’s very first experiments with light, heralding Chu’s treatment of light in his works after 1970.


The early 1960s was the most defining period in Chu Teh-chun’s long illustrious career. Shortly upon his arrival in Paris in the mid-1950s, Chu was so inspired by a retrospective exhibition of French-Russian abstractionist Nicolas de Staël at the Musée d’Art Moderne that he made the decisive choice to move away from representational painting. In the few short years immediately thereafter, Chu’s own brand of lyrical abstractions met with instant critical acclaim in the Parisian art world. In 1958 the artist held his first solo exhibition in Europe and in 1960 signed an exclusive six-year contract with the Galerie Henriette Legendre, which was managed by Maurice Panier – the pioneering gallerist who discovered outstanding artists such as Wassily Kandinsky and de Staël, amongst others. Critics at the time lauded Chu Teh-chun as a trailblazing and unique artist whose vision and technique integrated elements from the East and West, resulting in a transcendent universal aesthetic that set him apart from Western abstractionists at the time; in the words of Lydia Harambourg: “Western artists merely paint the scenery, whilst Eastern artists become one with the universe. In Chu Teh-chun’s paintings, the form drawn out before the light and his quiet contemplation on colours are fused with the universe into an organic whole. After more than half a century of creative activities in Paris, he is unequivocally a master painter of the 20th century”.

Chu Teh-chun’s earliest abstractions in the second half of the 1950s simplified landscapes into cylinders, cones, spheres and abstract lines that intermingled in dynamic symphonies on his canvases. Starting from the turn of the decade, his brushstrokes became increasingly bold and sweeping, traversing his canvases with an astonishing combination of urgency and grace; while his previously isolated geometric shapes morphed into fluid shades of pigment of varying thicknesses and textures, generating extraordinary layering and movement. While employing the Western medium of oil, Chu upheld the rigor and spirit of traditional Eastern calligraphy techniques in both brushwork and composition: xiantiao, the life and breath of a line – in which each pause, transition and ending is as critical as the mark itself; duncuo, the subtle yet precise tilting and leaning of pressure of each wrist and arm movement; and finally fuyang, the overall balance of the structure and configuration of strokes. As a result – weight, lightness and dexterity coalesce and intermingle within Chu’s canvases, engendering stirring spaces that pulsate before the viewer. What is unleashed is the sublime conflating of abstract landscape with pure atmosphere, essence and poetry – a heroic extension of China’s unique intellectual heritage of uniting landscape painting and poetry that began as early as the Wei and Jin Dynasties.

The vertical composition ofNo. 144 further recalls traditional Chinese hanging scrolls that depict soaring cliffs, stark chasms and plunging waterfalls, evoking the same sense of dizzying, vertiginous immensity. The juxtaposition between the vertical orientation of the painting and Chu’s bold horizontal sweeps creates an intense visual impact – one that, crucially, relies on a compositional strategy that departs from classical perspective employed in Western art. Instead, Chu creates a unique space by harnessing the distributed perspectives of Chinese ink-wash painting. Maurice Panier observed: “Chu Teh-chun’s expression of space is not traditional; we could say he employs multiple spaces […] His inspiration usually derives from landscapes or from the lines of a poem”. In the words of Pierre Cabanne, meanwhile, Chu creates a universe that is “not far, but not near, and without perspective. It is an abyss, it is the gasping of time, it is a dynamic poem, its form appears to come from a highly focused spirit, determined to meet the viewer directly in the eyes. The artist does not know what stillness is, everything on him is in a moving state, like a Chinese landscape painting portraying a scene in the natural environment, the force of life moves the trees, hews open the mountains, floods the river, as the sunny sky makes all things converge into one tranquil whole. In Chu Teh-Chun’s painting, depth floats onto the surface and the contrary moves towards unity.”

In 1969, after encountering Rembrandt’s works in person at the Rembrandthuis Museum in the Netherlands, Chu Teh-chun was inspired to further his journey of abstraction by focusing on light; his later works from the 1970s onwards increasingly featured dramatic chiaroscuro and sophisticated interplays of light and shadow, achieving atmospheric compositions lit with an internal glow or radiance – i.e. what is now universally recognized as the signature ‘Chu Teh-chun’ luminosity. What is remarkable about No. 144 is that while it was created half a decade before Chu’s fateful encounter with Rembrandt paintings, it nevertheless exhibits – in the cracks of incandescent radiance that frame the top and bottom of the painting – early hints of Chu’s treatment of light. Emitting the graceful glimmer of glowing embers, No. 144represents the kindling of the great abstract master’s inner light – one that unites the technique of light and shade as emanated from the Western tradition and the light of cosmic harmony linked with nature and the unceasing flux of the world. As a pivotal painting that heralds Chu’s later works, No. 144 is infinitely mesmerizing in its sublime majestic resplendence and presents to us a pure and condensed slice of the tremendous mystery of the universe.

The work will be offered in the upcoming auction in Hong Kong Brushwork III – Abstracts Masters on 24 November. 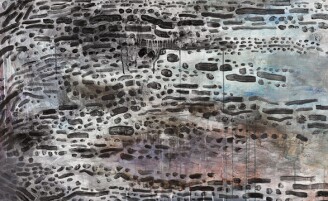