B ronze ritual objects bear the mystery of their origin. They invite you to consider how they might have emerged from an ancient tomb or a burial pit – coming to the surface perhaps when the topsoil erodes from millennia of rain and wind. These treasures are understood to be more than ornamental objects; they may be considered the height of metalcraft and artistic expression in an ancient period of history.

The perfect harmony of form, decoration, and inscriptions on the ritual objects represents the earliest narrative that predates the written word.

The archaic bronze vessels reflect the spiritual aspirations from the early beginnings of the Shang and Zhou dynasties. While the precise meaning of the objects have obscured through the passage of time, they have become tangible symbols of the interaction between art and ritual. Having an essential function in sacred rites of leadership – of securing harmony between the spiritual and earthly realms – the bronze ritual objects took on the symbolic meaning of political sovereignty and the divine authority bestowed upon ancient rulers.

Casting and molding methods during the Shang dynasty marked a significant innovation over the earliest bronze ritual vessels, which were forged by hammer. The new techniques gave rise to more sophisticated, large scale production, and the development of intricate designs and new forms. The bronze vessels were intended for worship of ancestors, offerings in feast rites, commemoration of important events or various sacrificial ceremonies.

Each vessel shape had a specific function and fascinating history. Just to highlight some examples from Sotheby’s Chinese Art (11-18 December, Hong Kong) auction, perhaps the most important shape may be the tripod ding, a ritual food cauldron with a deep U-shaped body and supported on three tall legs. This category of vessel features prominently in the legend of China's first dynasty – in which King Yu divided the realm into nine provinces, each represented by one of nine ding. As the dynasty gave way to the Shang and later to the Zhou, the idea of possessing bronze ding had become synonymous with political legitimacy and sovereignty.

The tripod jue and flared gu are both wine vessels popular during the Shang dynasty and used during ceremonial rites for wine libations. The jue has a tripod shape which enables the wine held in the container to be heated. At one end is a long spout to pour wine, and at the opposite end is a pointed tail forming the rim, surmounted by a pair of finials. The gu is long chalice that tapers to a slim waist and flares to a trumpet shape at the upper rim. Both jue and gu were archaic bronze forms often found together in Shang tombs.

Bells were an essential component of ritual ceremonies at the altars, formal banquets and processions of the aristocracy. Bells were often assembled in sets, each of different size. During the Shang dynasty bells would be grouped in trios, while in the Western Zhou and later, bells would often come in groups of five or more. The music produced by these instruments was believed to facilitate communication between humans and deities. According to The Rites of Zhou, only kings, marquises and other select members of the aristocracy were entitled to possess such bronze bells, which in turn symbolized social status becoming auspicious gifts among the aristocratic class.

The chunyu, an oblong drum or bell, was originally developed for warfare to be used for communication and warnings during military campaigns, with the earliest examples of the chunyu appearing during the Spring and Autumn period (770–476 BCE). However, this original function later gave way as an instrument for ritual ceremonies. A flat plate is set atop a curved and undecorated base, and a small knob is used to suspend the instrument. The chunyu is typically undecorated for acoustic design, with the exception of the suspension know that is often cast in the form of an animal motif such as a tiger.

A comprehensive look at all of the decorative elements of archaic bronze may be beyond the scope of this short article on the different shapes of ritual objects. However it bears mentioning that the characteristics of the decorative elements emphasize balance and symmetry. A large majority of ritual bronzes will feature embellishments of animal motifs or highly stylized zoomorphic masks. This abstract “ogre mask” motif may find its origins in the mythical animal masks found on neolithic jades, and it will often feature a pair of eyes details by swirls encircling two sockets, a mouth or lower jaw indicated by a narrow horizontal bar, heavy eyebrows suggested by horizontal bands across the top, and sometimes horns. This symmetry in paired elements not only offers an aesthetic of balance and proportion, but also suggests a harmony of two realms – a dualism in thought that brings to mind the interaction of art and ritual. 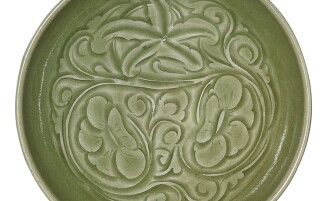 Past Auction
Chinese Art Including Property from the Collection of Cheng Huan
11–18 December 2020 | 10:00 AM HKT | Hong Kong