I n what may be the longest bidding war in auction history, extending past 75 minutes with more than 100 bids, a 700-year-old rare surviving work by renowned Yuan-dynasty master painter Ren Renfa sold for HK$306.6 million (US$39.6 million) in today's Fine Classical Chinese Paintings sale in Hong Kong. It was a thrilling hour as demand for Five Drunken Princes Returning on Horseback brought the price far beyond the original estimate of HK$80 million to HK$120 million, and ultimately was won by the Long Museum in Shanghai. The demand for this extraordinary painting is underscored by its history and impeccable provenance.

“What better home for this masterpiece of Chinese painting, than the Long Museum in Shanghai - whose collection of ancient Chinese Art is among the best in the world.”

Today's sale of Ren Renfa's painted scroll set two records for Sotheby's Hong Kong; it is the top price for any Chinese ink painting sold by the auction house and, for any artwork sold by Sotheby's Hong Kong the price is second only to the landmark sale two years ago of Zao Wou-Ki’s Juin-Octobre 1985. Year to date, Five Drunken Princes Returning on Horseback is also the most valuable work sold at auction in Asia.

The runaway success of Ren Renfa's handscroll capped a triumphal auction, which tallied HK$375.6 million (US$48.5 million). Another high point of the sale was when Landscapes after Si Kongtu by Huang Yue and Zhao Bingchong went under the hammer, exceeding expectations of a HK$8 million high estimate to fetch a sale price of HK$20.7 million (US$2.7 million). The auction also featured works from several important private collections, including Bada Shanren’s Lotus, Wang Hui’s Landscape after Dong Yuan, and Wang Jian’s Landscape after Dong Yuan – all of which far outperformed pre-sale projections. 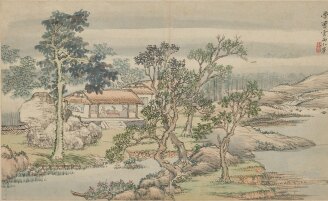