W hen Edward Said wrote his seminal "Orientalism" in 1978, he provoked a backlash against Eurocentric depictions of the Orient - the 'other' that was being viewed with a romanticized exoticism. For decades Orientalist art came to be seen as the product of stereotyped representations embodying a colonialist attitude.

Fifty years later, history has moved on and new attitudes surround this type of art. Whether the appearance of the first luxury hotels in Dubai appropriating the Thousand and One Nights theme with their extravagant opulence has anything to do with it, is arguable, but the new sentiment in the region means that Middle Easterners reclaim their heritage with pride and are moving beyond the colonial aftermath, particularly in light of the Gulf's economic strength.

More recently the market for Orientalist painting has seen a healthy revival and many of these exceptional portraits of life in the 'Orient' are being celebrated for their true value. Some were executed in pre-photography 1800s where people saw them as depictions of locations they would not otherwise see, and the artists made every effort to highlight their scenes with acuity, 'hyper-realism', and a touch of their own notional understanding.

Others, such as Ludwig Deutsch, would work from scenes thath were composed post-travel, in his Paris studio using photographs, Islamic tiles, furniture, textiles and metalwork to ensure that every minute detail could be captured. Yet another iconic painter, the Turkish 'Renaissance man' Osman Hamdy Bey, became the first to embrace fully the European style of painting in depicting his own country - unlike the others who were looking from the outside, he was looking at his own culture from the inside. Sothebys London currently showcases the legendary Najd Collection, featuring 155 such works, of which 40 will be on sale on October 22.

Coinciding with this landmark Sothebys show, the British Museum, in collaboration with the Al Bukhary Foundation, is featuring a provocative exhibition that attempts to re-assert Orientalist art not just as stereotypes and cliches of the region but as a form of cultural dialogue where both East and West influenced each other in equal measure. If Dinet's "Prayer" with its pseudo-calligraphic border, derives from the Western fascination with devotional aspects of 'Mohamedanism', so do Muzaffar-al Din Shah's regal embellishments take inspiration from European court dress.

The contemporary section of the exhibition showcases one particularly striking work (Who Will Make me Real, 2003) by Palestinian Raedah Saadeh who inverts the traditional gaze and idealized pose associated with 'odalisques' by wrapping herself in torn newspapers referring to Middle East politics, and staring straight at the viewer.

With two such extensive exhibitions each highlighting the skills, passion and artistry of this historical school of painting, the real impact for me came in the realization that the nineteenth century curiosity and fascination with the 'other' - while leading to fallacies - was siginficantly less sinister than the current fear associated with any mention of Islam in a political context. These shows are welcome occasions to see the relationship between East and West as less threatening, and more inspiring than we have come to understand. With the region re-appropriating and even branding its own rich and 'exotic' heritage, there is every possibility of seeing this cultural dialogue for the hugely fertile bridge that it was. 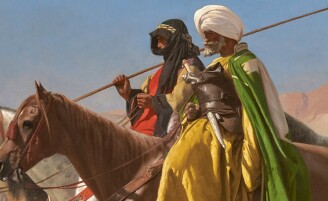