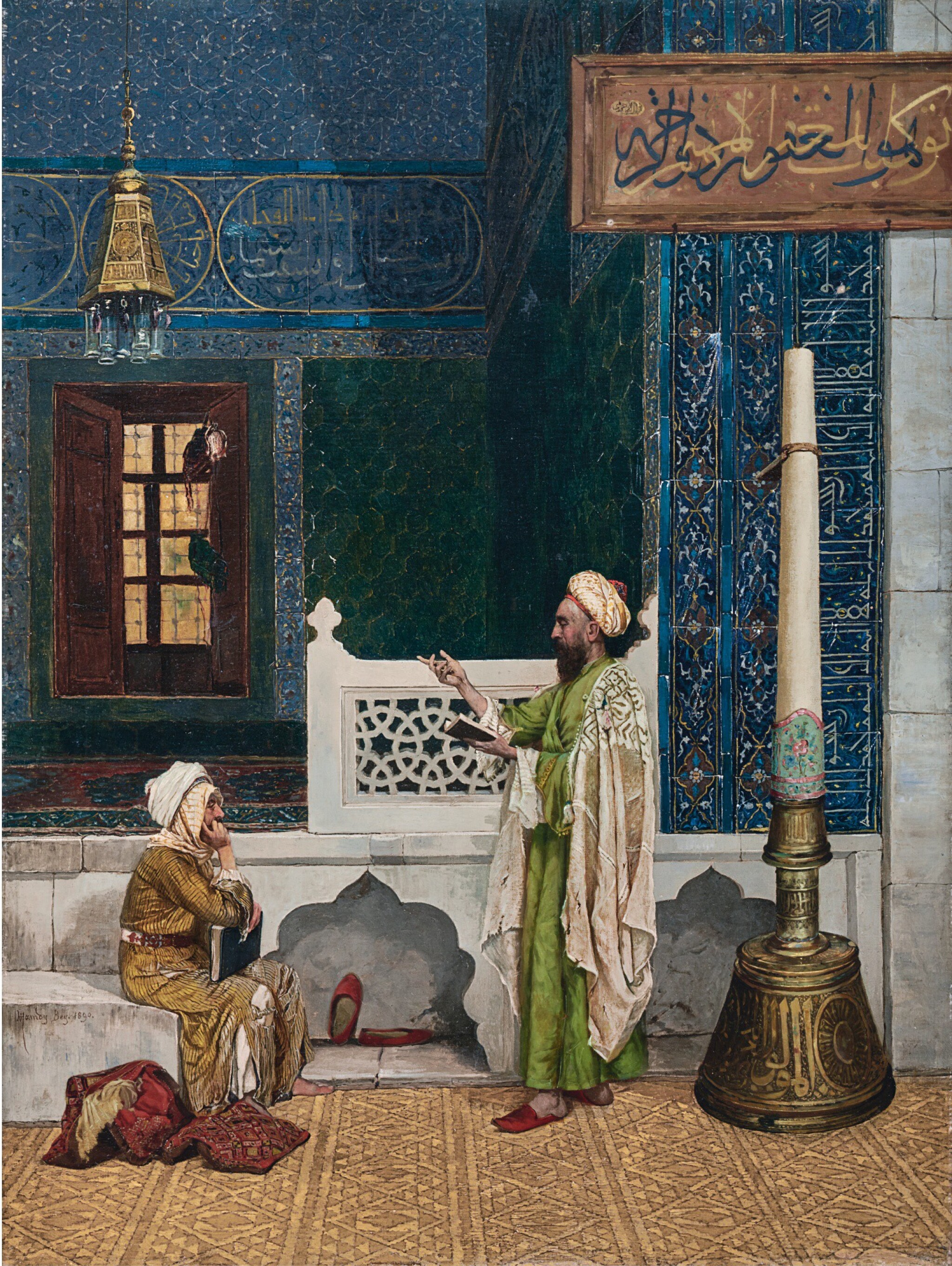 We are grateful to Dr. Edhem Eldem for his assistance in cataloguing this work.

This painting was purchased from the Berko Gallery and not as stated in the printed catalogue. Please note the amended provenance and exhibition history.

Berko Gallery, Knokke-Heist, Belgium (purchased at the above sale)

'Most [of his works] depict an imagined past, peopled with multiple representations of himself and his family […] activities he portrays interlinked past and present: himself portrayed as a hoja reading or praying, his daughters and son reading or playing musical instruments, and women fashionably dressed […] Osman Hamdy added a powerfully visible skein into [Orientalism’s] weave.'

As the first Turkish artist fully to embrace a European academic style of painting to depict his own country, Osman Hamdy Bey, more than any other Orientalist painter, personifies the bridge between European and Islamic culture. Hamdy Bey was born in Istanbul and received his artistic training in Paris during the 1860s. While under the tutelage of Gustave Boulanger, Gérôme's influence is apparent in his work. Unlike Western painters who approached their Orientalist subjects from the outside looking in, Hamdy Bey enjoyed a unique position; as an artist endemic to the region, he simply painted what he knew and understood.

The opulent tiled setting of the present work is a secluded corner of the Yesil Cami, or Green Mosque, in Bursa in western Anatolia. Framed by a Mamluk lantern and monumental candlestick, two men face one another, the seated man receiving Koranic instruction from the standing hoja or teacher. The closely cropped composition suggests that Hamdy Bey may have had recourse to photographs, a practice favoured by French academic painters such as Jean-Léon Gérôme. Indeed, a contemporary photograph published by Sébah & Joaillier (fig. 1) almost certainly served as the prototype for the background, just as a photo of the outside of the madrasa of Karaman Hatuniye was used for the backdrop of a related oil, also of 1890, in which the same two figures feature in an outdoor setting (fig. 2). The pose of the seated man to the left in both that and the present painting is based on a contemporary photograph of the artist himself (fig. 3).

While at first glance Koranic Instruction bears many of the hallmarks of a French academic painting, it was a radical work for its time that challenged artistic and social norms. For a start, figurative painting was virtually unpractised by Muslim artists at the time.

In addition, Hamdy Bey, a cosmopolitan and well-travelled man, saw his paintings as vehicles for social commentary. At some times light-heartedly and at others provocatively, he often criticised conservative tendencies in his homeland. For example, the present work contains several subtle details that challenge the noble occupation of Koranic instruction. The preaching imam remarkably still wears his slippers despite the need to remain barefoot inside a mosque. His pupil, his slippers casually discarded in the niche beneath the alcove, appears on the verge of falling asleep. The painting is a manifestation of ideological and societal tension that not only offers European viewers an insight into Ottoman life but also promulgates a new and radical form of visual expression at home.

Such nuances suggest that Hamdy Bey's pictures are not merely picturesque records of fact. In their intensive examination of life in the Ottoman Empire and their persistent focus on the physical and intellectual liberties exercised, they become political manifestos. Paradoxically, while his paintings presented to the uninitiated Western viewer a more natural and unbiased portrait of Islamic society, they also depict undisguised human behaviour, particularly in a religious setting, that challenged the social and religious status quo at home.

While this engagement with, and sometimes subversion of, Ottoman culture and traditions make Hamdy Bey a fascinating figure in the modernising reforms of the so-called Tanzimat era, he was also an artist uniquely preoccupied with manipulating his own image. The seated Koranic pupil in the present work is in fact none other than the 48-year-old artist himself, based on a photograph (fig. 3). Hamdy Bey's nonconformity finds expression throughout his oeuvre, whether in The Mihrab of 1901, showing a woman seated on a Quran stand while the books themselves lie pell mell at her feet; or in Islamic Theologian with Quran of 1902 (fig. 4), in which a book and the unbound leaves of another are carelessly discarded on the floor. Some of these tensions are also visible in Young Emir Studying painted twelve years before the present work, which is now a highlight of the Louvre Abu Dhabi (fig. 5).

The son of the Grand Vizier Edhem Pasha, Osman Hamdy Bey lived a productive and artistically prolific life; he was a renaissance man and leading figure in Turkish cultural life of the time. Sent to Paris as a young man to study law, he discontinued his legal training in the early 1860s to focus on painting. The latter discipline he took up first in the Paris atelier of Gustave Boulanger, and later under the influence of Jean-Léon Gérôme. During this time Emperor Napoleon III invited Sultan Abdulaziz to the Exposition Universelle of 1867 in Paris, which marked the first time an Ottoman Sultan visited Europe. In the famed exhibition Hamdy Bey showed three works, each of which received awards.

On his return to Turkey Hamdy Bey spent two years as an aide to Midhat Pasha, Governor of Baghdad, and upon his return to Istanbul in 1871 he was appointed deputy director of protocol at the Ministry of Foreign Affairs. Notwithstanding his diplomatic obligations he continued to paint and to exhibit his work internationally to wide acclaim, building his reputation both at home and abroad. Indeed it was because of international interest in his work that Hamdy Bey persisted in signing all his works using the Latin transliteration of his name rather than the Ottoman script. Keen to provide fine arts training in Turkey, Hamdy Bey established and became director of the Academy of Fine Arts in Istanbul (now the Mimar Sinan University of Fine Arts). This allowed aspiring Ottoman artists to receive their training in their home country rather than travelling to Europe to study. In 1908 he was appointed President of the Society of Turkish Artists.

In addition to being a successful painter with a burgeoning international reputation, Hamdy Bey was a pioneering archaeologist, a keen amateur architect, a fine poet and writer, and an accomplished musician. In 1881 he was appointed Director of the Imperial Ottoman Museum at the Çinili Köşk (Tiled Pavillion) in Topkapı Palace by Sultan Abdul Hamid II. As custodian of a fledgling institution in inadequate premises, he commissioned French-Ottoman architect Alexander Vallaury (1850-1921) to design a new building in a Neo-classical style to house the Greco-Roman holdings. To aid his acquisition programme, in 1884 he helped enact a law prohibiting the looting, theft and smuggling of artworks; the crucial legislation established an early legal framework for the preservation of antiquities.

Whilst the new museum building was under construction, Hamdy Bey worked assiduously to build up its holdings, directing a series of excavations in Syria and Asia Minor. Leading some of the very earliest archaeological digs carried out by an Ottoman team, he published the accounts of his discoveries with the distinguished French archaeologist and fellow polymath Théodore Reinach (1860-1928). Hamdy Bey's single most important archaeological discovery was the so-called Sarcophagus of Alexander in Sidon in Lebanon, then part of the Ottoman Empire. This extraordinary find, together with his other archaeological discoveries, were all sent back to Constantinople. His efforts allowed him to complete the new museum building in Topkapı Palace.The enlarged and vastly improved collections finally opened their doors to the public in 1891. In later years, as more acquisitions were made, Hamdy Bey also oversaw two additional extensions in 1903 and 1904, ensuring the museum's position as one of the most important centres for archaeological appreciation and study in the world.

The many international accolades bestowed on Osman Hamdy Bey during his lifetime attest to the notion that arguably no other artist and man of letters from the region did more to build bridges and foster understanding between the Orient and the Occident. Foreign recognition for Hamdy Bey's achievements included corresponding membership of the Royal Academy of Arts in London; honorary membership of the University of Pennsylvania (1895); the Légion d'honneur (1906); and an honorary doctorate from Oxford University (1909).