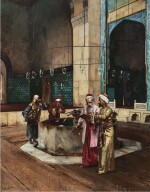 In 1890 Ernst travelled to Constantinople; this trip would have a profound impact on his artistic output, hitherto focused on Moorish and North African subjects. A keen photographer, he took a camera with him but was afraid to use it because of Turkey's religious laws; in fact, other artist travelers such as Fausto Zonaro and Jean-Lean Gérôme faced a similar dilemma. Whereas the latter was able to ask Abdullah Siriez, a former court painter to the Sublime Porte, to send him photographs back to France, Ernst had to rely on his own sketches and memory from which to build up his finished Turkish compositions.

Under the reformist Sultan Mahmud II, the capital of the Ottoman Empire experienced rapid modernisation and westernisation. The Orient Express railway service, inaugurated in 1871, directly linked the city to Paris; women wore the latest fashions imported from Paris, and the School of Fine Arts, established by Osman Hamdy Bey, employed French, German and Italian painters to teach the European figurative style of painting to Turkish students. Nonetheless, Ernst preferred to focus on Turkey’s traditional Muslim heritage and past.

It is very likely that Ernst met Hamdy Bey, an enigmatic reformer and conservationist all in the same. While he was the first Ottoman painter to adopt the European style of painting, he also played a key role in passing Turkey’s first Conservation Act.

Hamdy Bey’s paintings of mosques and their interiors undoubtedly inspired Ernst. In fact, the present work depicts the same prayer niche in Bursa’s Yesil Cami, or Green Mosque, that appears in Hamdy’s painting Koranic Instruction (lot 21), which Ernst may have seen. As an avid ceramicist himself, Ernst would have been fascinated by the mosque's turquoise and green hexagonal tiles that decorate its prayer hall and antechamber.