T he Michael Asher Foundation, established in 2013 by the Los Angeles artist’s will, is a not-for-profit organization, with a mission to oversee, support, maintain and protect the historical accuracy and authenticity of Michael Asher’s work. The Foundation, also based in Los Angeles, is currently processing the artist’s extensive archive in order to make it available for research by scholars, artists, curators, and other interested persons.

Because Asher’s works were typically temporary, site-specific interventions, the documentation in the archive—including photographs, correspondences, notes and research findings – is especially important for understanding his legacy. The Foundation also makes charitable grants to support publications by artists, arts education, arts libraries and archives, as well as organizations that foster challenging work by artists who might not typically have opportunities to exhibit in commercial galleries or museums. The full proceeds from this sale will benefit the Foundation’s activities.

In his works, Michael Asher (1943-2012) drew attention to the conventionalized methods of artistic production and reception as well as the making of history. Rather than offering new art objects for exhibition, he typically altered the existing environment or conditions of display, often repositioning or strategically removing artworks, walls, fixtures, facades, information, etc. While the principles of conceptual art remain relevant and fundamental to generations of artists working world- wide, Asher remains one of its most influential figures. His work has been recognized by prominent institutions and museums in the United States and internationally, including projects realized by The Museum of Modern Art, New York; the Art Institute of Chicago; the Museum of Contemporary Art, Chicago; The Museum of Contemporary Art, Los Angeles; the Los Angeles County Museum of Art; the Centre Georges Pompidou, Paris; the Van Abbe museum, Eindhoven; the Kunsthalle Bern; the Venice Biennale; Documenta in Kassel; and Skulptur Projekte in Münster. In 2010, Asher received the prestigious Bucksbaum Award for his project Open All Day and Night in that year’s Whitney Museum of American Art Biennial exhibition. An acclaimed and highly-regarded professor at California Institute of the Arts for over forty years, he was renowned for his rigorous Post-Studio critique class.

Betty Asher (1914-1994), Michael Asher’s mother, was a force in advocating for contemporary art in Los Angeles starting in the 1960s, especially Pop Art. Trained as a registered nurse in Chicago, where she was born, she left that work after marriage and settled in Los Angeles, where she became a noted collector, curator and gallerist. She worked at the Los Angeles County Museum of Art from 1966 to 1979, when she left the museum to start an innovative gallery with Patricia Faure. 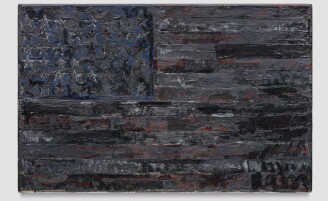 Betty Asher’s art collection was broad-ranging and driven by a personal vision that embraced both well-known and lesser-known artists. She was an early supporter of emerging artists who later achieved great recognition, such as Jasper Johns, Andy Warhol and Ed Ruscha, among others, all of whom she befriended, supported or represented. The artistic environment that Betty Asher created no doubt had great influence on Michael Asher, who developed a singular practice as an artist and teacher. Ultimately, his own art collection, initially started through gifts from his mother, and later to include works by fellow artists, such as Donald Judd and Dan Flavin, reflects both his personal inheritance and his public significance as a central figure in contemporary art history.