I n 1956 the British Surrealist Roland Penrose scrutinised Picasso’s extraordinary ability to conjure a picture out of almost nothing. “As though in a trance he makes an image hitherto invisible become real,” wrote Penrose. This month, a collection of Picasso’s works, presented at Sotheby’s in a special online auction, and a new blockbuster exhibition at London’s Royal Academy, both highlight the enduring appeal of these enigmatic illusions.

The fascinating group of unique works at Sotheby’s – titled Pablo Picasso: Souvenirs de Vacances – includes drawings, watercolours, ceramics, cutouts and collages and arrives from the collection of the artist’s granddaughter Marina Picasso. The array of creative expression, from across the various periods and settings that shaped the artist’s career, is mirrored in the selection on view at ‘Picasso and Paper’, the RA retrospective described by the Financial Times as a “free-spirited, wildly unusual display of works.” Both events illuminate Picasso’s unique talent for invoking an atmosphere, a character or an idea with just a sprinkling of marks.

Both at the RA and Sotheby’s, we find Picasso driven by an innate understanding of line – its fluidity and flexibility and capacity for disruption and disturbance. Its seemingly limitless potential. Picasso wasn’t a colourist, like his great friend and genial rival Matisse, but rather a draughtsman without boundaries.

In the Marina Picasso Collection, we discover works executed in Rome, Avignon, Antibes, Cadaqués and Fontainebleau. And their subject matter is equally diverse: there is a Cubist study of a mandolin from 1910, alongside a whimsical 1915 portrait of a man sporting a marvellous moustache. There are Hockney-esque floral studies, playful pictures of pipes and ceramic tiles of bulls and birds. There is even a picture of Yuri Gagarin, drawn by Picasso in 1961 to celebrate the cosmonaut’s landmark space flight.

And at the RA, we find Picasso using paper to riff on his great themes – sex, war, mythology and the Old Masters – and to work up some of his greatest compositions, including Les Demoiselles d’Avignon and Guernica (including traumatic sketches of shrieking horse heads). But there are also jovial works dashed off on hotel stationery and the endpapers and margins of books. One of the show’s delights is an elegant cut-out of a dove – simple and touching – made when he was a young boy growing up in Málaga. Twenty years later he was still using the scissors, creating cuttlefish, lightbulbs, leaves, guitars and nudes out of newsprint and cardboard.

Over some eight decades, Picasso’s drawing life was the foundation on which he built his career, his image, his legend. Just consider all those – sometimes true, sometimes apocryphal – stories of his doodling a mini-masterpiece on a restaurant napkin. His mother burnished the myth, insisting that the infant Pablo’s first word was “piz” – a shortening of lápiz, Spanish for “pencil”.

For three quarters of a century, the pencil saw him through Blue and Rose periods, Primitivism, Cubism, Neo-Classicism and Surrealism. It was a constant presence through two marriages and countless affairs and accompanied him as he moved from Barcelona to Paris to the Côte d’Azur. For Picasso, drawing was the stuff of everyday life – a form of diarizing – his lines tracked across pots and plates and bowls as much as scraps of paper and canvas, they enlivened mealtimes and holidays, as well as exhibition openings and museum gatherings.

The events at the RA and Sotheby’s allow audiences a rare overview of an equally rare flair for experimentation. Here is the work of an artist whose only guide was his intuition. “People don’t understand what a line means,” Picasso noted. “When you start drawing a line you don’t know where it’s going to go – it starts and goes on until something stops or makes it turn.” 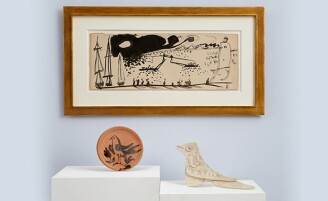