Marcel Proust: A Life in Letters

As a rare and fascinting set of letters and mauscripts by Marcel Proust and his close friends and collaborators are offered for sale in Livres at Manuscrits sale in Paris on 24 May, Jean-Yves Tadié looks back over the many intertwined narratives of Proust's life and works.

This magnificent collection, which comes along a direct line from Marcel Proust, falls under the heading of friendship. The correspondence with Reynaldo Hahn, the one with Max Daireaux, the letters from Gaston Gallimard, the books dedicated to Proust of which we have a large set featuring works by such authors as André Breton and Blaise Cendrars, bear witness to this. Proust’s life, from Les Plaisirs et les jours (1896) to the end (a previously unpublished drawing shows his deathbed) is played out before us, inscribed in the light and threatened traces left by the fountain pen: and here we are, falling in love once again with those magical inscriptions that summon ghosts to life.

A literary life: after the preparations for the translations of Ruskin (with a previously unseen pastiche of Ruskin), an outline for the passage which will become, in Du Côté de chez Swann (Swann’s Way), the walk along the Vivonne. This manuscript, a present from Mme Mante-Proust to her son-in-law Claude Mauriac, has already been published by him in the journal Le Point under the title Les Sources du Loir à Illiers (The Sources of the Loir in Illiers). We recall that, amongst a considerable critical oeuvre added to his novels and his Journal, he published a Proust par lui-même (Proust in his own words).

Reynaldo Hahn appears between love and friendship. A brilliant writer and a talented musician, as Emmanuel Berl says, they loved one another, visited one another almost every day, and wrote the rest of the time. In one of the letters presented here, the author of Jean Santeuil, wrote to his friend Hahn: "I want you to be there all the time but as a god in disguise that no mortal would recognise" (at the end of March 1896).

And in fact he appears in various disguises: an anonymous friend, the Marquis de Poitiers, Henri de Reeveillon, in Jean Santeuil, which would not be published by its author. On the other hand Proust does not quote Reynaldo in À la Recherche du Temps Perdu And Hahn, the author of several brilliant books and a still unpublished journal (apart from the volume called Notes) wrote nothing about Proust and died before publishing his letters. These are the ashes left to us from this fire.

Of the letters from Hahn himself, nine are included here, from the period following the romantic break-up of the two men, including a letter from 1898, what starts with the devastating death of Mallarmé and goes on to reproach Marcel for his silence. There will be a lot of appreciation for the account of a day spent by Marcel which his friend requested, about how not to catch cold and fight against perspiration.

The letter reveals the disastrous rituals of the son of the Professor of Hygiene at the medical faculty in Paris. Crowning the set, a very amusing portrait by Reynaldo in character from his Comic Opera based on L’Île du rêve (The Island of the Dream) based on Loti, and his clothes covered with inscriptions that are the titles of his works.

A fine set is devoted to the preparation of the publication and translation of Sésame et les lys (Sesame and Lilies) by Ruskin. This is no longer a matter of gothic art, as with Le Bible d’Amiens (Montesquiou dedicated one of his books to ‘our beloved cathedraliser’): one of the pieces left from this period is a very badly damaged copy of The Seven Lamps of Architecture on which Proust has scribbled notes in ink (to the horror of Proust-lovers – the discovery that he was not a bibliophile…) Reading is now his main theme. We will find it again in Contre Sainte-Beuve and in the pastiches that Proust would write three years later. This is an opportunity to remember why Proust chose as his master the great British aesthetician and art historian.

Why a master? He needed someone to put him on the right path, and then he went further than anyone. A first outline of a note for his translation of Sesame and Lilies shows that he immediately set about opposing his author: "By setting out my ideas I discover that they are opposed to his." It is a reflection on writing that leads him to writing, from passivity to creation.

He also frees himself from his model and his influences though pastiche: a dedication of Sésame et les lys to Jean Sardou turns into an (unpublished) three-page pastiche: Proust imagines Ruskin describing a painting by Turner showing the dedicatee of the book, Jean Sardou (son of the author of Tosca). This pastiche shows one essential trait, the poetry of detail in Ruskin, which will lead to that of Proust: he always registers details in a painting, as for example the ‘little patch of yellow wall’ in Vermeer’s View of Delft.

We also spend a moment in Cabourg in Normandy. A note from the Grand Hôtel in 1911 tells us the number of the three rooms occupied by Proust. As to his daily consumption, it was quite different from that of Fitzgerald and Hemingway at the Ritz: two cafés, a bottle of milk, a fruit compote and, by way of extravagance, a chocolate soufflé. He also paid the hotel typist, Miss Hayward, to type out Du côté de chez Swann.

The large collection of 138 letters from Gaston Gallimard to Proust (along with other letters from his collaborators) resemble an early monument to the genesis and publication of the oeuvre of Marcel Proust. This volume from Gallimard reveals a reverse Proust, a negative Proust. They are constantly modelled around the writer’s desires, his moods, his plans and reproaches. It’s a long love scene, or a long domestic row of which, as in Cocteau’s La voix humaine, we hear only one of the two protagonists.

Neither author nor editor could live without the other. That was why Gaston Gallimard modelled himself on the writer, dismissing his requests while trying to satisfy them, and sometimes adopting the tone of the doctor bending to the whims of his patient. He would show the same flexibility towards Céline and Claudel. So many manic demands, not for the man himself but for his book on the one hand, and so much patience and subtlety on the other would make the two men a unique couple in the history of publishing.

Here, at last to bring this wonderful history to a sad conclusion, is an unpublished drawing as unknown as its creator, Jean-Bernard Eschemann (the only other thing I have been able to find of his is a painting on a rather different subject, The Harem Beauty), the sixth of the artists who depicted Proust on his deathbed: "his face rejuvenated, stripped of the wrinkles, contractions, bloating, tension and sagging inflicted on it by suffering." 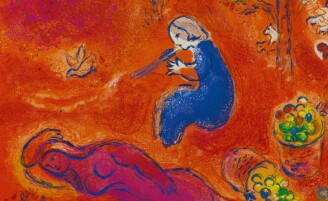