Legendary Dealers S.J. Phillips and the Plot to Foil Hitler

LONDON – S.J. Phillips is a name synonymous with antique jewellery and fine silver, as shown by the remarkable collection of jewellery, British & Continental silver, Faberge and Objects of Vertu on sale in S. J. Phillips: A Bond Street Legacy at Sotheby’s on 18 October. Little-known, however, is the legendary dealers’ participation in an undercover World War II plot that saved thousands of lives, and turned the tide of the war in the Allies favour.

THE EXTERIOR OF THE S.J. PHILLIPS SHOP

In 1943, the receipt for a diamond engagement ring, bought at the Bond Street jewellers, was found on the person of a British soldier, whose body washed up on the coast of Spain. But not only did the officer never buy the £53 engagement ring from S.J Phillips, it turns out the man never existed at all.

The dead man’s body was the key component of Operation Mincemeat, a British plot hatched by Lieutenant Commander Ewen Montagu to fool the Axis powers over the location of an invasion - Operation Husky. This was planned for Sicily, but the Allies wanted the Nazis and their allies to believe it would be in Sardinia.

The plan was hatched to place ‘top secret’ documents on the body of an apparent British officer, for the Nazis to find. These faked documents would give away the details of an allied invasion plan. They would be so convincing, the Nazis would believe they were onto a secret plot and prepare for invasion in what would turn out to be the wrong place.

A NEWSPAPER REPORT ABOUT THE STORY

The man’s body actually belonged to a vagrant, who died either of pneumonia or from eating rat poisoning, depending on the report you read.

The lengths the British went to in order to create a believable personality for their man undercover were impressive. Not only did “Major William ‘Bill’ Martin” have his orders, his Combined Operations H.Q. pass and a numbered invitation to the Cabaret club on him (for he was ‘a gay young man and fond of a good time’, Montagu decided), he also had a living fiancé at home.

This fiancé perhaps explains why ‘Bill’ was discovered with a demand to pay back his rather high (for the time) overdraft, standing at £79, as well as a letter from a nagging father keen to get him to write a will. After all, the reckless fellow had insisted on getting muddled up with a girl right in the middle of a war.

This entire personality and back story was invented thoughtfully, with careful consideration put into everything from the dates on various ID cards, to how worn and folded the letters from his sweetheart would be.

Montagu explained in a later newspaper interview: “Every young officer has some romantic attachment and ‘Major Martin’ had to have one. The chief event in his ‘life’ as we drew it for him was that he had recently met a charming girl called Pam. He carried a snap of her and two letters from her in his wallet.

“Probably his engagement was the cause of his overdraft for he also had the bill (unreceipted!) in his pocket for a £53 engagement ring. We felt that it would be difficult to define a personality more clearly than that with but a few letters and we had to set about making them real…”

Which is where S. J. Phillips stepped up to help the war effort.

THE INTERIOR OF THE S.J. PHILLIPS SHOP

Montagu continues: “I chose S.J. Phillips of Bond Street as the jewellers for the engagement ring as I knew they had an international trade and it was probable that their bill-heads would be available in Germany for comparison.”

Along with Lloyds Bank, S.J. Phillips provided the necessary fake documentation for the man that never was, giving him a completely believable and well-rounded backstory for when he was discovered by the enemy.

The Nazis were entirely fooled, with the additional help of false Enigma encrypts that suggested the Allied invasion plans went all the way from the Sardinian beaches to Hitler’s headquarters. Consequently, the surprise invasion of Sicily was a great success.

For his role in Operation Mincemeat, Montagu received a military OBE.

The S. J. Phillips: A Bond Street Legacy sale is at Sotheby’s on 18 October. 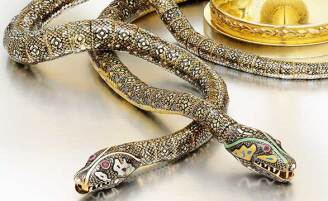