By Ori Hashmonay
The violence and trauma of the war directly informed the creation of her monumental piece, ‘Untitled,’ 1965 – created decades later. Memories of the zeitgeist haunted Bontecou, which in turn imparted a sinister, expressive quality to her work. ‘Untitled’ realized over $1.2 million at Sotheby's Contemporary Curated auction (6 March 2020, New York), the second highest price ever paid for a work by the artist.

W orld War II invaded Lee Bontecou’s psyche at a young age. Born in Rhode Island in 1931, the war surrounded the artist. Her early memories are marked by her parents joining the war effort, with her father creating gliders for the US military and her mother wiring transmitters for submarine navigation.

Thus, when Bontecou matriculated at the Art Students League of New York to study sculpture and welding, images of the war began to reflect in her creations. In 1957, she received a Fulbright scholarship to study in Rome in 1957. And it was there, in Italy, that her artistic practice was first shaped: she was attracted to the machinery she saw on the streets and began experimenting with new materials; Bontecou picked up an acetylene torch to create soot in her drawings, a technique she would soon apply to her sculptures.

It was also in Italy when Bontecou first learned of the Soviet Union’s Sputnik, the world’s first artificial satellite launched into space. At that moment, she was entranced by the deep and black vastness of space – the dusty blackness of the unknown. She once stated:

“Getting the black… Opened everything up.”

In 1958, Bontecou returned to America and moved to a studio in New York’s East Village. Recalling Italy, she searched for found objects and incorporated them into her work. Conveyor belts discarded by the laundry beneath her apartment, bits of canvas, and pieces of wire and machinery left on the streets were twisted and stretched into three-dimensional wall hangings.

The resulting artworks were characterized for their ingenious, unsettling use of space: gaping black cavities that incite both fear and fantasy. Untitled, executed in 1965, was such a work. The extreme tension of the Cold War period, the fighting in Korea, the spirit of exploration in the space race, and the yearning for freedom and equality in the civil rights movement all deeply affected Bontecou’s work in the early 1960s. She has since described her sculptures of this time as “war equipment with teeth.” 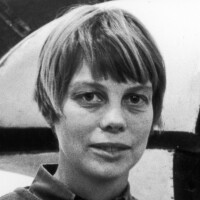 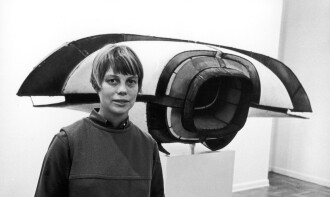 Her fear and anger were heightened by media images of warfare prevalent during World War II. Some of the holes in her sculptures, viewed by many as animal eyes or sexual allusions, were covered in bars reminiscent of the prisons, camps, and barbed wire of war. Others were given a sharp metallic grin. Bontecou had been struck by the legend of the Bocca della Verita (Mouth of Truth) in Rome:

“If you put your hand in and you tell a lie something would bite it off.”

Assemblage artist Joseph Cornell, a friend of Bontecou in the early 1960s, noted in a 1962 journal entry that “in other days there were the ‘mouth of truth’ and the ‘lion’s mouth’ of the Venetian Inquisitions, then, there is the terror of the yawning mouths of canons, of volcanic craters, of windows opened to receive your flight without return, and the jaws of great beasts; and now we have Lee’s warnings.” (Joseph Cornell cited in: Mona Hadler, “Lee Bontecou’s ‘Warnings,’” Art Journal, vol. 53, Winter 1994, p. 56)

The powerful visual language exhibited in Untitled and other contemporary sculptures afforded the artist a unique position in the art world: Bontecou was the sole female artist represented by the famed Leo Castelli Gallery throughout the 1960s. By 1963, when Bontecou was just thirty-two years old, the Museum of Modern Art and the Whitney Museum had both acquired large steel-and-canvas sculptures. Bontecou's Untitled will come to auction on 6 March 2020 in New York as part of Sotheby's Contemporary Curated sale.