T he term “disruptive” gets bandied about a lot these days. Used to hawk everything from apps to athleticwear, the word has become a placeholder for anything that’s a deviation from the status quo. So what makes a product truly disruptive? There may be no finer example than Audemars Piguet’s Royal Oak. While it's now considered a classic, worn by the likes of LeBron James and John Mayer, the Royal Oak began as a rule-breaking rebel. Undoubtedly a G.O.A.T., the Royal Oak introduced an entirely new category of horology and remains the Platonic ideal of a sport watch. How’s that for disruption?

The Royal Oak’s origin story is one of the most frequently cited legends among watch enthusiasts, and for good reason. It’s an almost Shakespearean tale of defying the odds to achieve success. In the mid-20th century, Audemars Piguet was revered as the superlative watchmaker and the firm’s finely crafted timepieces, displaying a mastery of both mechanics and aesthetics, were worn by an elite group of discerning collectors. Then, the 1970’s came around. Political and social upheaval saw the culture radically change, and the status quo was questioned in all facets of life. Add to that a depressed economy and the emergence of quartz battery-powered watches, and you can begin to understand the dilemma Audemars Piguet faced.

The appetite for luxury mechanical timepieces, Audemars Piguet’s stock-in-trade, had drastically waned. Not only were tastes changing, but quartz offered a cheaper, more accessible alternative to haute horlogerie. Sales slowed, profits wavered, and it became clear that something big was needed to course-correct the brand’s fate. At 4:00pm on the eve of the Basel Watch Fair in 1970, an Audemars Piguet executive rang a Hail Mary call to designer Gérald Genta. Having already proven himself to be a savant with designs for Omega’s Constellation and Patek Philippe’s Ellipse, Genta was tasked with a tall order.

As he recalled in a 2009 interview: “The Managing Director of Audemars Piguet rings me up and tells me: ‘Mr. Genta, I need a steel sports watch that has never been done before, I want it to be something totally new and waterproof…I want the design by tomorrow morning.'” With research, the company had discovered that the market was interested in steel, which, at the time, was deemed a utilitarian material unbefitting to an elevated brand like Audemars Piguet. It was up to Genta to make a steel timepiece as refined and lust-worthy as any solid gold dress watch – and to do it in time to present to buyers the next day.

Of course, Genta delivered. Inspired by a diver’s helmet, his design featured an octagonal bezel affixed with eight exposed screws and a sleek integrated bracelet. The minimal dial was embossed with a petit tapisserie grid, clean save for linear indices and a date display at 3 o’clock. Piguet executives met the sketch with resounding approval, and Genta gained the green light to begin work. Realizing the watch in 3-D, however, was more complicated than one might expect. Ironically, the first Royal Oak prototypes were produced in white gold; Genta's design was so unprecedented that creating it in high-grade steel was actually more difficult, time-consuming and expensive than using precious metal. It took over a year of research and development to perfect before the Royal Oak officially debuted at Basel in 1972.

The Royal Oak ushered in a new breed of timepiece that would come to dominate the next century: the luxury sport watch.

The public’s initial reaction wasn’t enthusiastic, to say the least. The Royal Oak was truly unlike anything else on the market, and buyers didn’t quite know what to make of it. One thing was its appearance: stark, geometric lines, visible hardware, and a size — 39mm wide — that was significantly larger than most watches at the time. Then there was the issue of price: introduced at 3,650 Swiss Francs, the Royal Oak was more expensive than a gold Patek Philippe dress watch and over ten times the cost of a Rolex Submariner (which wasn’t considered a luxury item). A steel watch that looks like a piece of machinery, for a price that steep? People were sure it would be the end of Audemars Piguet.


The brand produced an inaugural run of 1,000 pieces — a much larger volume than usual based on their faith in the Royal Oak’s success. It took some time, but, eventually, aficionados recognized the watch’s ingenuity as a watershed design and began buying. It took two or three years, depending on various reports, for the first 1,000 pieces to sell; but once they caught on, the Royal Oak became a cornerstone of the brand. The models from that first production, known as Series A and identified by the “A” engraved on the case-back and the AP initials above 6 o’clock, are the most coveted Royal Oaks among collectors today. The following Series B and Series C pieces, also identified by the serial number on their case-back, are a close second for collectability.

The style’s popularity has generated an array of variations over the years. Some of the most notable include the Royal Oak Perpetual Calendar, which broke the record for the thinnest rendering of that intricate complication when it launched in 1981, and the Royal Oak Tourbillon, a version of which was introduced this year. The most popular model, however, is the Reference 15202, also known as the “Jumbo”. Released to commemorate the Royal Oak’s 40th anniversary in 2012, the 15202 bears the closest resemblance to Genta’s original design (those highly sought Series A pieces). And in 1993, Audemars introduced the Royal Oak Offshore, a controversially souped-up take on the original design.

It’s not surprising that the original, in its purest form, continues to reign supreme; all these years later, the design still carries an irreverent edge. The Royal Oak ushered in a new breed of timepiece that would come to dominate the next century: the luxury sport watch. It was a novel way of assessing a watch’s value, based on design and craftsmanship rather than materials or complications, that presaged how we wear watches today. Royal Oak's elevating of the steel sport watch to the highest strata of luxury is the reason that today’s titans of industry wear Rolex Daytona’s or Hublot Big Bangs with bespoke suits. It was the Royal Oak, though, that first made casual covetable — not only a G.O.A.T. but an unparalleled O.G. 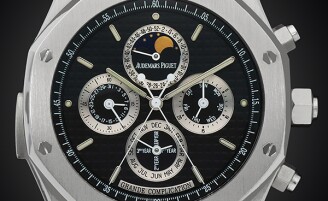