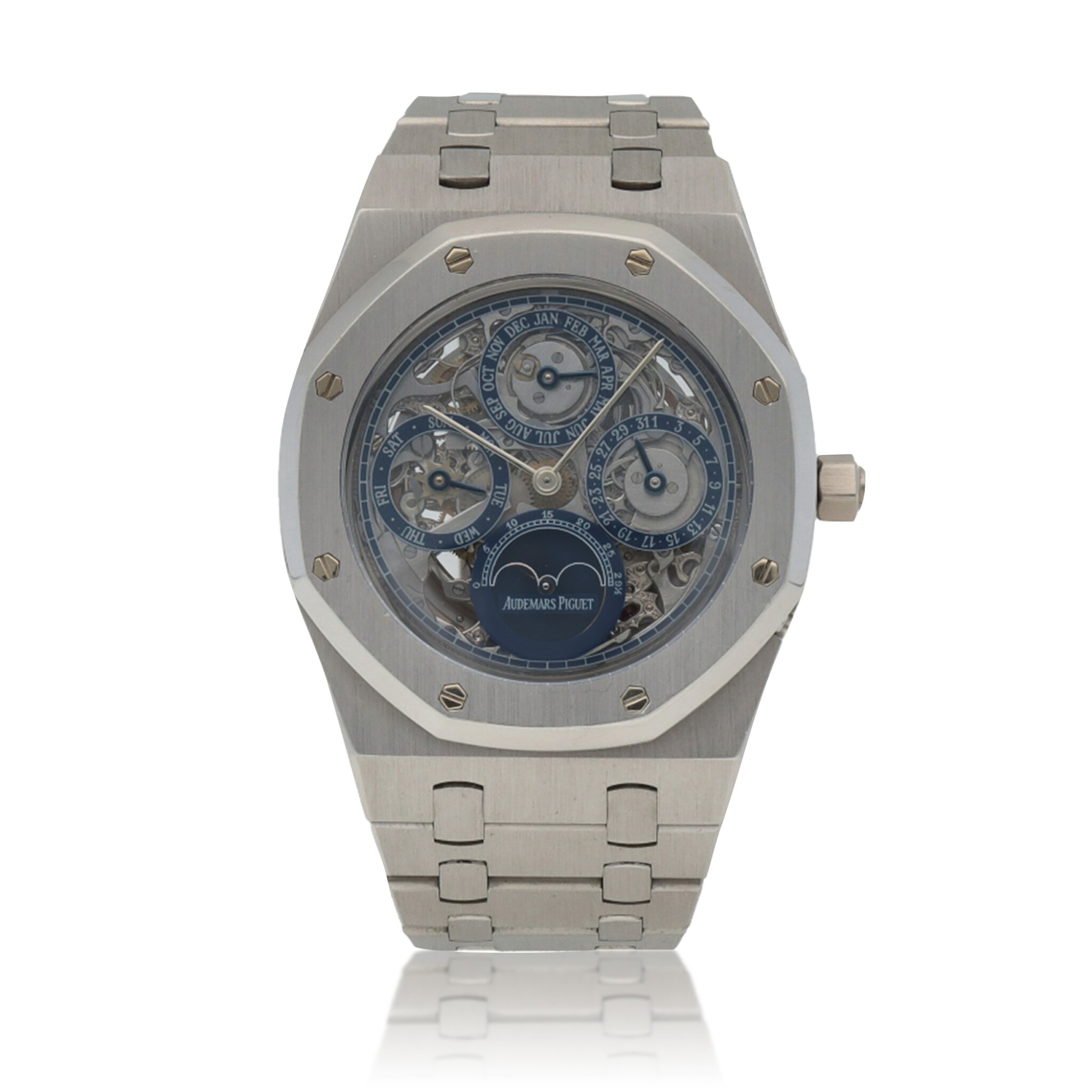 Case: platinum, back secured by 8 screws

CASE: in good and attractive condition. There is some wear visible with the naked eye, such as fine dings and scratches, as well as fine signs of polishing. The bracelet is in good condition with some wear and light warping.

This present lot could be considered as the pinnacle of the Royal Oak complicated collection. It gathers all the characteristics one could possibly desire.

When it comes to the celebrated Le Brassus based Manufacture, two thoughts immediately spring to mind: Royal Oak and perpetual calendar.

The Royal Oak has changed with image of the brand as well as the watch panorama forever by creating a new category that has become the most desirable one of all: the luxury sport watches.

The Perpetual calendar is part of the very DNA of Audemars Piguet even before its creation, being the complication was chosen by Jules Louis Audemars himself for his school watch (also equipped with quarter repeating and dead beat second mechanisms) that he completed before 1875 and kept improving for the following 20 years.

There is no surprise that AP decided to equip their spearhead model with this complication. The Royal Oak was first introduced with a perpetual calendar under the reference 5554 (later renamed 25554) in 1983 and made available the following year.

The Royal Oak Perpetual calendar has been produced in many different versions, under various references.

The Reference 25636PT is a collector’s dream, The iteration that features the favourite and the most sought-after characteristics. Faithful to the original Jumbo model, it has a 39mm diameter case. It is crafted in the noblest metal: platinum. The perpetual calendar is the most coveted complication for the Royal Oak. It also has a breathtaking skeletonized dial. Furthermore, this model cleverly has the subsidiary dials and outer track in attractive blue, creating a both useful and pleasing to the eye contrast with the movement, allowing the wearer to ready the time and the calendar in an easy and enjoyable way.

The 25636 was produced in very small quantity, only 264 examples, in all metal combinations. Only 34 of them were made in platinum, such as the present example, making it not only a superb and most attractive piece but also an extremely rare one.

Coming from a most eminent collection, the appearance on the market of such an important, rare and beautiful watch is an important event for the international horological market.