Kees van Dongen painted this monumental portrait in 1912, depicting his wife Augusta, known as Guus, reading a book by Rabelais. The painter, who’d had a contract with the Bernheim-Jeune gallery since 1908, had met with great public success thanks to an exhibition dedicated to his work at the gallery in June 1912. This painting, La Lecture, is part of the new aesthetic that he developed during this key period and marks an essential turning point in his career as a painter.

Van Dongen had just returned from a trip to Spain and then Morocco that would profoundly transform his way of painting. The artist returned with an expanded yet more subdued palette, and especially a new way of treating light. The vigorous layers of colours of his Fauve paintings gave way to works with more shimmering hues and smoother surfaces. A transitional work par excellence, La Lecture shows an undeniable relation to Matisse’s art. If the two men had frequented each other’s exhibitions since first appearing together — in the now famous room reserved for the “Fauves” during the decried Salon d’Automne of 1905 — their approach to painting was radically different until then, the classicism of Matissian art contrasting with the provocative crudeness of the Dutch painter. It was after this trip to Morocco, quickly followed by a trip to Egypt, that Van Dongen moved closer to the art of his elder with the fauve fever of the early years giving way to a more serene, more luminous art.

“...the artist moulds the substance of flesh with greens where daylight is silvered, tea roses marbled with yellow, chalky whites mottled with lilac, azures tainted with the sun. Animated in their synthetic sketch by these colours that spread out in fluorescent undulations, the faces flushed purple and green […], mouths flowering in an envelopment of light and flesh, to create the sensation of mystery in full daylight”

Marius-Ary Leblond, foreword of the exhibition at the Bernheim-Jeune gallery in 1908

Like Matisse, Van Dongen also brought back from his travels many decorative objects, fabrics and props, which would appear in his subsequent works. The flowery pattern of the cushion on the right of the composition demonstrates this, the material echoes Moroccan hangings, or the necklace with the hand of Fatima hanging around Guus’ neck, a souvenir from his travels brought back as a lucky charm.

The young Guus is depicted wearing an outfit by the famous fashion designer Paul Poiret: the striped blouse with tassels, the open yellow skirt revealing red stockings and shoes are characteristic of Poiret’s creations in the years 1910-11 as shown in fashion magazines of the time. In fact, the painter and his wife became close friends with Paul Poiret and his wife, Denise, the year before this painting was created.

On June 24th 1911, the last day of his exhibition at the Bernheim-Jeune Gallery, Kees and Guus van Dongen took part in a sumptuous party, the “Thousand and two nights”, organised by the Poirets in the garden of their mansion on the avenue d’Antin. Similarly, the Poirets were regularly invited to the parties organised by Van Dongen in his studio on the rue Denfert-Rochereau. Poiret and Van Dongen shared the same taste for oriental fabrics and precious ornaments. Paul Poiret was then the fashion designer of European high society but also a great collector of modern art: works by Matisse, Modigliani, Picasso and Brancusi decorated the walls of his house. Works by Van Dongen quickly joined them, such as Colombes or Quiétude, one of Poiret’s favourite paintings which decorated his bedroom from 1920.

Green which is optimism that heals, blue which is light and rest, royal yellow, a few colours of forgetting and all the colours of life.

Poiret was also passionate about interior decoration, as evidenced by the boutique, “Martine”, he created in 1911, and where Fernand Olivier, Pablo Picasso’s ex-companion and Van Dongen’s model, worked as an assistant. At this time Paul Poiret also launched the fashion of oriental decor: cushions and poufs replaced chairs while walls and floors were covered in rugs and fabrics decorated with North African motifs.

Kees and Guus van Dongen immediately adopted this novel decor in their apartment on the rue Saulnier, as seen in the period photographs and the present painting which gives us a glimpse of the couple’s intimacy. La Lecture remained in the painter’s family until 1990. Painted in 1912 in the studio of the rue Saulnier, it followed the painter to the rue Denfert-Rochereau and then to the Villa Said where in 1917 it was hung in the entrance hall. Painted almost entirely in 1912, it was after its installation at the Villa Said, between 1917 and 1920, that Van Dongen finished the last details of the composition by adding a few decorative details (the tablecloth’s fringes, waves on the painting in the background, and a chignon to Guus).


A work at the crossroads of multiple influences, La Lecture resonates perfectly with avant-garde practice at the beginning of the 20th century: the painting summarises the Fauve and Cubist revolutions while also integrating the influences of oriental art (North-African but also Asian as revealed by the stylisation of certain lines). It testifies especially to Van Dongen’s extraordinary talent as a painter of colour and light. As Marius-Ary Leblond described in 1908, “the artist moulds the substance of flesh with greens where daylight is silvered, tea roses marbled with yellow, chalky whites mottled with lilac, azures tainted with the sun. Animated in their synthetic sketch by these colours that spread out in fluorescent undulations, the faces flushed purple and green […], mouths flowering in an envelopment of light and flesh, to create the sensation of mystery in full daylight” (Foreword of the exhibition at the Bernheim-Jeune gallery in 1908).

Van Dongen himself, in a text he wrote a few months before he painted La Lecture, gave clues for the reading of the meaning behind his chromatic palette of this masterful painting: “Green which is optimism that heals, blue which is light and rest, royal yellow, a few colours of forgetting and all the colours of life.” (in, “L’Avant-propos capricieux”, December 4, 1911). 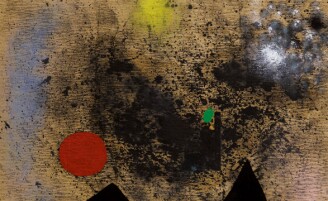