H ow did you get started in the art world?
In 2008 I was studying art history at the University of Miami, and heard about a part-time, clerical role within Sotheby’s Miami regional office. I grew up in New York City, not far from Sotheby’s on York Avenue, and the thought of working for the auction house was always a dream for me. I jumped at the opportunity to interview for the position. The director of the office was a charming, gregarious gentleman, and we developed a good rapport. He offered me the position on the spot, and the next day I began working for Sotheby’s two days a week. What began as a clerical role quickly morphed into a mentorship, and I was very fortunate to begin accompanying the director on visits and appraisals to many of the top art collections in the South Florida region. In a short time, I learned a lot about the business, the role the regional offices played and most importantly, I realized my passion for Modern, post-war and contemporary art and that this was going to be my career path. I loved what I was doing and became totally hooked.

What was it like working at a regional office versus the headquarters?
Working in a regional office involves a lot of direct contact with Sotheby’s clients. Their role is to maintain existing and new relationships by accommodating both the immediate and long-term needs of the local collectors. In the New York headquarters you see the whole machine at work. You are not siloed to one region, one department, one auction. It is “go time” all the time and you see how all departments work together cohesively to ensure our auctions, private sales, events and projects are all successful.

How did you go from valuations to private sales?
I joined Sotheby’s in 2010 as a member of the Appraisals team. In this role I had little direct client interaction, but I was responsible for organizing and updating the valuations and appraisals for a wide array of Sotheby’s clients. During this time I saw a tremendous amount of art digitally, which gave me insight into who was collecting, how collections were put together and what various objects were worth. At the time, all I wanted to do was work with our clients, but in hindsight the Appraisals team was the perfect place for me to begin my journey.

In 2011, I was offered an opportunity to catalogue and research for the Old Master Paintings department. I was very eager to learn how to research and write about art, learn how to organize a sale and spend time helping clients who were active in the market. I thoroughly enjoyed the position for two years before joining the Private Client Group, which was a dream role for me.

In the Private Client Group we served as a single point of contact for Sotheby’s clients who were collecting across several categories. I was working firsthand with our clients and learning about everything from American furniture to jewelry to contemporary art. Over my six years there, almost every collector I was working with began to transition and focus almost entirely on post-war and contemporary art. Simultaneously, private sales was becoming more integrated into our everyday business model, so when I was offered an opportunity to join the Contemporary Art Private Sales team, it not only felt like a natural fit, but an exciting opportunity with a group that was poised to see enormous growth within the business, which it certainly has.

What sparked your interest in contemporary art?
I grew up in New York City where contemporary art is all around us. As a child, I can remember my parents dragging me to the Chelsea galleries, various museum shows and on occasion to Sotheby’s and Christie’s auction previews. I was about 12 years old when I saw a Jean-Michel Basquiat painting titled, Baptismal, from 1982, at a Sotheby's exhibition. I thought that was the coolest painting I had ever seen and it completely piqued my interest. I can also remember going to a Donald Judd show in the mid-1990s at Paula Cooper gallery. The objects in the show were so monumental and so different from anything I had ever seen, but I loved them. I still do.

Do you collect anything yourself?
I do. I collect what I love, which is predominantly Minimalism, Conceptual art, photography and some sculpture. Right now my three favorite pieces I own are works by Brent Wadden, Kon Trubkovich and Wolfgang Tillmans.

I saw Brent's work at Mitchell-Innes & Nash for the first time, about five years ago. I love how his work sits at a crossroads of Minimalism and abstraction. When I went to Berlin, I encountered his work again at Perez Projects. This was a totally different series from what was shown at Mitchell-Innes & Nash , but I loved it and shortly after this I was able to buy my first work by the artist. Kon Trubkovich I saw for the first time in 2015 at Marianne Boesky Gallery, where they exhibited a number of what he calls his "Mama" paintings. I fell in love with the process-oriented nature of the work – it's extremely meticulous, and they possess a certain level of nostalgia that I appreciate and respect. Kon has become a friend and I just love everything he does. I discovered Wolfgang Tillmans's photography several years ago through an obscure Sotheby's sale and have always loved the figural, abstract and conceptual work he has made. I was lucky to see his retrospective at the Beyeler Foundation in Basel, Switzerland and soon after his Tate London retrospective. Both were very special exhibitions that featured much of his groundbreaking work. I think he is the best photographer of our generation and pushes the boundaries of the medium in so many different ways.

What’s so interesting about Color Field painters?
Color Field painting in its essence is about two things: color and form. Whereas Abstract Expressionism is characterized by action and energy coupled with angst, as a result of WWII – large gestural brushstrokes, lots of paint, heavy impasto – Color Field, which was born out of Abstract Expressionism, is more about mood and the emphasis of color itself. I've always found there to be an elegant simplicity to Color Field.

My favorite artists from the movement are Kenneth Noland, Morris Louis, Helen Frankenthaler and Frank Stella, who straddles Color Field and Minimalism. In particular, my favorite Kenneth Noland painting is one that Sotheby's actually sold not long ago, titled Heat. This amazing painting from 1958 possesses an unparalleled calm but emotive energy – its just a killer painting, one I really love and think about often.

In 1953, Kenneth Noland and Morris Louis, both members of the Washington Color School, together went to visit Helen Frankenthaler in her New York studio. They were intrigued and later mesmerized by her process of pouring paints and soaking them into the canvas. Frankenthaler has a very poetic way of flattening an image with the use of color. Pouring the paints and removing the artist's hand from the process was revolutionary and a technique that inspired many of her contemporaries.

We have an excellent Morris Louis for sale.
Yes, Mira, from 1962, is a beautiful late painting completed before his untimely death later that year. It's from a series that’s naturally called the "stripe paintings," and it's a dialogue between color and form where he employs this pouring technique. The canvas becomes part of the paint and part of the color, rather than sitting on top of the surface – a kind of poetic deviation away from Abstract Expressionism.

What about the Kenneth Noland?
The Mysteries: Maine Painting, from 2000–2005, is a really interesting work which revisits an earlier series of “target” paintings that Noland began in the mid-1950s. Noland studied under Josef Albers in 1947 at Black Mountain College. What he took away from Albers was this way of working outward from within as a distinct compositional format. Noland’s artistic process allows the paint to appear to sit on top of the canvas giving his work an ethereal, floating characteristic which is just dreamy. The early “target” paintings such as Heat are foundational and exploratory. They also directly precede Noland’s “Chevron” paintings, arguably his most recognizable and celebrated series.

Who are some of the Minimalist artists you're interested in?
I am infatuated with Donald Judd, Agnes Martin, Frank Stella, Dan Flavin and Ellsworth Kelly. Minimalism is about one thing: the essential. Like Color Field, Minimalism is a reaction to Abstract Expressionism, whereby the artists were discovering the most simplistic form possible. Carl Andre famously said, “art excludes the unnecessary”. Minimalism certainly adheres to that and I find its simplicity very sophisticated.

Did Donald Judd embrace this?
Judd never wanted to be called a Minimalist artist. He would say that he created objects. This piece that we have for private sale is a later work from the 1980s, Untitled (89-32, 5R SFA). Judd dies in 1994, but he began fabricating the cadmium red light oil on wood pieces in the early 1960s, and continued to experiment with the medium throughout his entire career. Unlike many of his Minimalist contemporaries, Judd embraced the use of color. He viewed color, particularly the color red, as a way to emphasize shape and define the contours and angles of his objects. These red cadmium oil on wood pieces are early examples that were intended to be hung on the wall. Previously he used the medium for several of his floor sculptures, many of which include aluminum, acrylic, pipe and galvanized iron, and are on view in the current Judd survey at MoMA. Another, more substantial example of Judd’s work using cadmium red light oil was just featured in Sotheby’s Contemporary Art Evening auction, Untitled, 1962. From 1961 to 1969, Judd used the image of the cadmium red light on wood pieces to make very small editioned woodcuts. This work is undoubtedly the genesis of what directly follows in Judd’s oeuvre which are the progressions, beginning in 1964 and the stacks, beginning in 1967, for which he is most celebrated.

What did you see when you went to Marfa? What was so special about that trip?
The Marfa trip was amazing for so many different reasons. It was like a religious experience. Getting up early in the morning and experiencing the light that Judd had reflected on in his memoirs – the desert has this very clean, pure light. The sunrise is early. The terrain is mostly flat, and it takes on a magnificent meditative quality. It's amazing that Dia Art Foundation, the de Menil and Schlumberger families had the courage and foresight to buy Fort D.A. Russell, a retired military fort, for Judd and allowed him to convert it into a studio and exhibition space. Being able to see Judd’s work in such large format, both indoors and outdoors, allows you to interact with the objects in a way I have never done before and gave me a totally new perspective on the entire body of work. I also enjoyed seeing the works by John Chamberlain, Carl Andre and other Minimalist contemporaries of Judd. Seeing them all together in one special, isolated area gave me an entirely new appreciation for the movement and genre. 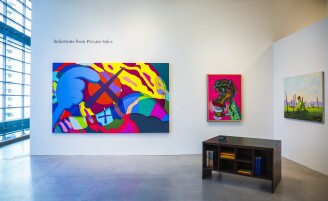