PROVENANCE
Estate of the artist
André Emmerich Gallery, New York
Private Collection, Chicago (acquired from the above in 1988)
Acquired by the present owner from the above

CATALOGUE NOTE
“It is as if the colors… are compressed into pillars that smolder and glow; become yet hotter because of their velocity; and burn channels through the ambient surface, whose whiteness is sometimes warmed by their heat and sometimes seems icy in contrast.” (John Elderfield in: Exh. Cat., New York, Museum of Modern Art, Morris Louis, 1986, p. 74)

Executed in 1962, Morris Louis’ Mira is an arresting example of the artist’s Stripe paintings, which he had begun in early 1961. This series, which many consider to be Louis’ most important and advanced, was the artist’s last before his untimely death in September 1962. A testament to the museum-quality caliber of this series, similarly scaled Stripe paintings are held in major renowned public collections including the Solomon R. Guggenheim Museum, New York; the Museum of Modern Art, New York; the Palm Springs Art Museum, California; and the Flint Institute of Arts, Michigan. Louis has long been the subject of renowned institutional exhibitions worldwide, including solo presentations at the Baltimore Museum of Art (2013); The Phillips Collection, Washington, D.C. (2011); High Museum of Art, Atlanta (2006); Museum of Modern Art, New York (1985); Fort Worth Art Museum (1985); Museum of Fine Arts, Boston (1985); Whitney Museum of American Art, New York (1970); Stedelijk Museum, Amsterdam (1965); Institute of Contemporary Art, London (1960); amongst others. Showcasing the high demand of Louis’ Stripe works at market, his highest achieved price for a Stripe was recently realized in 2018 for a total of $3,852,500, resulting as the second highest record price ever for the artist at auction.

A member of the important Washington Color School alongside Helen Frankenthaler, Kenneth Noland and Sam Gilliam, Louis was concerned with the importance on the dialogue between color and form. After a formative visit to Frankenthaler’s studio with Clement Greenberg, Louis reached a turning point in his career. By soaking the canvas with paint, rather than painting onto its surface, the paint and the canvas became one. Through this important stylistic development, Louis successfully removed any emphasis on the artist’s hand and gesture; a notably different style to the Abstract Expressionist paintings of his peers. In said fashion, the present work is visually compelling for its ability to present color as its own entity. Louis carefully controlled each vertical stripe, often with the aid of a palette knife, maintaining an even sense of saturated color throughout the entire vertical length of each stripe. This evenness was a direct result of the development of ‘Acryloid F-10’ a new formula of Magna paint that was manufactured for Louis and Noland in April 1960. The new paint was first used in Louis Unfurled series, but Louis continued to employ it with its maple syrup-like consistency for the Stripe series. In Mira, there is a simultaneous sense of balance and tension; vibrant primary colors meld into deep colors of green, ochre and mustards in the center of cotton duck, creating a harmonious balance of color and form.

Perfecting the techniques of his Veils and the Unfurleds, Louis' Stripe paintings are a glorious denouement of his artistic aims. Unlike previous bodies of work, the Stripes are characterized by an inextricable fusion between paint and support—rather than merely sitting on top of the canvas, Louis’ painted ribbons of color become one with the canvas, burning into it and setting it ablaze in a prismatic optical experience. It is this precise luminosity that distinguishes Mira as an exquisite finale of the series, possessing an unforeseen quality of compositional dominance and tonal complexity. Illuminated by a valiant energy, Mira consummates Louis’ most esteemed body of work and endures as a shimmering apotheosis of the artist’s creative genius. 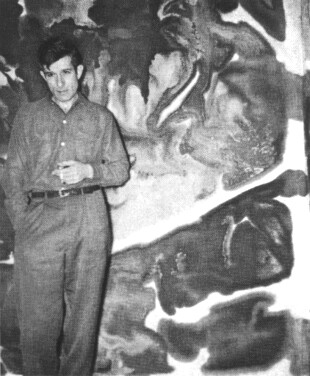