THE PROTOTYPE THAT INTRODUCED THE NIKE YEEZY BRAND TO THE WORLD

I n an unprecedented and historic offering, Sotheby's is pleased to present the Kanye West 'Grammy Worn' Nike Air Yeezy 1 Prototypes from 2008 will be available for direct purchase via 'private sale', with interested parties invited to submit offers directly to Sotheby's for consideration. 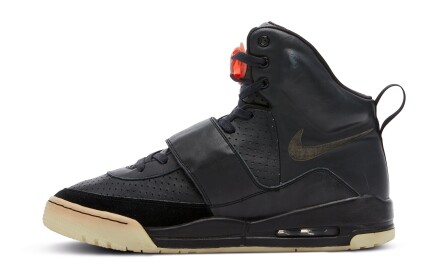 Worn during Kanye's memorable and emotional performance of Hey Mama and Stronger during the 50th Annual Grammy Awards, the present pair unveiled Nike's top-secret project and marked one of the most brilliant reveals in sneaker history: and made the Yeezy a pillar in the advent of modern sneaker culture. One of the most prized and sought-after sneakers in existence, the pair is on offer from Ryan Chang, renowned sneaker collector and curator of @applied.arts.nyc, and will be on public exhibition from 16 - 21 April in Hong Kong at the Hong Kong Convention and Exhibition Centre alongside highlights from Sotheby's marquee sales of Chinese Works of Art, Chinese Paintings, Classical Chinese Paintings, Modern Art, Contemporary Art, Important Watches, Magnificent Jewels.

For more than a year prior to the reveal, rumors swirled that a Kanye sneaker was in development. In one of the most brilliant and hyped reveals in sneaker history, Nike and Kanye revealed during the rapper's 2008 Grammy's performance a pair of sneakers that even top aficionados could not identify - the only clue was a Swoosh. The sneaker world erupted in a frenzy, as biogs and social media lit up across a community eager to learn about the new design.

Created exclusively for Kanye, the present pair introduced the Nike Yeezy to the world, redefining what a signature shoe could be. The Air Yeezy was an entirely new silhouette - created for an artist rather than an athlete, and paved the way for many of the artist collaborations of today. Though Kanye West's Yeezy brand has partnered with adidas since 2013, the Nike Air Yeezy I and Air Yeezy II are considered to be foundational to the trajectory of the Yeezy empire.

Brahm Wachter, Sotheby's Head of Streetwear & Modern Collectables, said: "This pair is critical to the development of the Yeezy franchise, which has become one of the most important sneaker and lifestyle brands in history. Debuted on-stage at the Grammys in 2008, the sneakers set off waves in the sneaker community as people tried to identify the mysterious pair. Afterwards, we saw a series of collaborations between Kanye and Nike, and then later the birth of his line with adidas. We are excited to bring this item to market in Hong Kong alongside other sneakers from our Buy-Now Sneaker Shop - available for immediate purchase - and hope that sneakerheads as well as music and fashion lovers will enjoy visiting this iconic pair at our exhibition in Hong Kong."

Ryan Chang, Collector and Curator (@applied.arts.nyc), commented: "As a collector, I've always considered sneakers to be design objects - a physical confluence of artistry, history, and in this case, music. The Air Yeezy Prototype is particularly special to me because it captured the cultural moment in 2008 so perfectly. There he was, Kanye West, on stage at the Grammys, winning 4 awards just that evening, and unveiling an incredibly important and iconic design in Nike's storied history."

Kanye wore the present pair during a critical moment in his career in both music and fashion. In addition to giving one of the most memorable performances ever at the Grammy's and winning in four categories (including Best Rap Album), the 50th Annual Grammy Awards is considered to be a critical moment in the history of footwear, and its intersection with entertainment. Today, the multibillion-dollar adidas Yeezy brand is an industry titan.

The Kanye West & Mark Smith designed samples were built in Nike's lab - known as the 'Innovation Kitchen' - at the company's headquarters in Beaverton, Oregon in 2007. The size 12 shoe is made of soft black leather with perforated detailing throughout the upper, and the heel overlay is branded with a tonal Swoosh. The design features the iconic Yeezy forefoot strap and signature 'Y' medallion lacelocks in bright pink. A custom lasered wooden box is included, which features a design and etching by the Yeezy 1 creator, Mark Smith.