Coral and the Cartier Style

T he deep fiery red, soft pink, and vibrant orange hues of coral are unmistakable. One of the few organic gemstones, precious coral has been used widely by European ‘haute joaillerie’ houses for over a century. Although matte in its natural state, coral has been polished, engraved, sculpted, rounded, fluted and smoothed. Achingly chic coral can comfortably take the main stage in a piece of fine jewellery or be simply used to introduce colour as an accent or a highlight. Offered in the Geneva Magnificent Jewels and Noble Jewels: Part I & II sales, to be held online and in a live auction between the 16th–24th of June, is a selection of exquisite jewels fashioned from coral.

Highly prized for its sacred properties for millennia, coral was traded widely between the Mediterranean and India. In ancient Rome children wore necklaces of coral for protection and to ward off evil. In 16th and 17th century portraits young subjects are shown wearing protective coral amulets or holding a branch of coral. The warm seas of the Mediterranean, along the coasts of Italy, Sicily, Morocco, Corsica and Algeria, are the birth place of the most sought-after corals. Rich, opaque, and tactile, the physical attributes of coral mirror the metaphysical; evoking passion, love and prosperity.

The popularity of coral during the Victorian era cannot be understated with entire parures created from carved and polished coral. The 1920s ushered in a new era for jewellery designs using coral, and the ever-innovative Louis Cartier (1875-1942) embraced coral elements, which were championed in Cartier jewels for the following sixty years. Louis Cartier’s desire for colour and craftsmanship saw a series of coral, onyx and diamond jewels displayed at the 1925 Paris Exposition Internationale des Arts Decoratifs et Industriel Modernes.

Francesca Cartier Brickell, great-granddaughter of Jacques Théodule Cartier (1884-1941) and author of ‘The Cartiers’, shares an insight on coral and Cartier; "When talking to me about the emergence of the Cartier style, my grandfather (Jean-Jacques Cartier) talked not just of the innovative designs and the quality of the gems and craftsmanship but also of the striking colour combinations. His Uncle Louis, he explained, had very strong ideas about which colours to put together for maximum effect and the combinations he chose became known as 'classic Cartier'. There was the Eastern-inspired blue and green of course, but there was also the very striking coral and black. White and black (diamonds and onyx) were hard to beat for elegant evening jewels but combined with coral worked in the day too, as did coral and emeralds, and coral and pearls. In fact, as children the Princesses Elizabeth and Margaret were given a Cartier coral and pearl parure for a doll!”

During the 1920s Louis Cartier had turned his curious and exacting eye towards the inspirational Asian Antique stores in Paris. The ancient Chinese also revered coral and viewed it and a symbol of longevity and official promotion, and striking orange-red hues are found in fine 17th and 18th Century Qing Dynasty art, objects and fashion. Cartier’s iconic Chimera bangles epitomise the Eastern exotic inspiration reimagined for the Western market. Jeanne Toussaint, who oversaw Cartier designs for decades and remained the head of artistic direction through the 1960s, was consistently inspired by, and often re-visited, themes of the exoticism of the Far East, India and Persia.

Cartier’s perfected precision and masterful workmanship are exhibited in the coral and diamond Chimera bangle featured in the sale. The carved coral body of the Chimera encircles the wrist and terminates in two opposed fantastical dragon heads with marquise shaped eyes and open mouths encrusted with diamonds. Chinese fashion captured the imagination of some of the most influential jewellery enthusiasts of the day, and Chimera bangles have been owned by the Duchess of Windsor, Daisy Fellows and Toussaint herself.

Cartier excelled in fine coral jewels throughout the 1960s and 1970s. The sale also features a stunning carved coral brooch by Cartier, previously the property of The Late Baroness Bachofen Von Echt. The brooch is designed in a contemporary naturalistic style; the rich hues of the coral, delicately balanced with white diamonds. Recognising their versatility, collector’s attention has gradually shifted towards mid-century coral jewels. Cartier’s love of coral, combined with their popular animalier themes, is beautifully demonstrated in the 1960s Cartier bracelet in the sale. Twisted rows of polished coral beads are clasped with a lounging canine friend looking longingly towards the wearer. 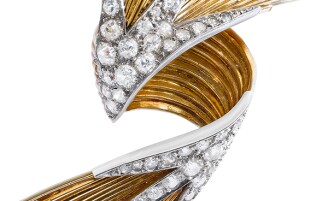 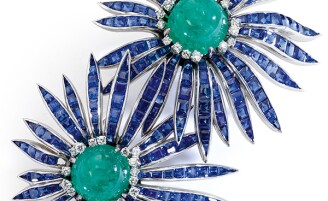