Constable’s Landscape: Dedham Vale and the Creation of ‘Constable Country’

‘Constable Country’, as it has come to be known today – that area of the Stour Valley around Dedham Vale, on the border between Suffolk and Essex, bounded on the west by the village of Neyland, and on the east by the sea – has become synonymous with the great painter who immortalised its bucolic river meadows and shaded waterways. A fertile and workmanlike landscape centred on the village and parish of Dedham, which had been a prosperous cloth-working town in the Middle Ages, in Constable’s day Dedham Vale was principally an agricultural centre, the main industry being founded on the production of wheat, barley and oats. Encompassing the villages of East Bergholt, Stratford St Mary, Langham and Stoke-by-Neyland, it is today an Area of Outstanding Natural Beauty, and was a part of the country with which Constable was particularly intimate.

The artist's parents, Golding and Ann Constable, lived at East Bergholt on the north eastern edge of the Vale, where the young painter was born and brought up. A prosperous miller and successful businessman, his father owned watermills at Flatford and Dedham, and a windmill on East Bergholt Heath (figs. 2 & 4). Golding traded corn and coal out of Mistley Wharf on the North Essex coast, operating a fleet of commercial barges on the river Stour (called lighters), as well as three dry-docks at Flatford for their construction and repair, and two sea going Thames barges for transporting goods between Mistley and London. He also owned a coal yard at Brantham and served as one of the Commissioners of the River Stour Navigation. Golding’s family had lived in the area for generations, and by 1774 he was sufficiently prosperous to buy a piece of land at East Bergholt and build a substantial mansion, where two years later his fourth child, John, was born, together with 93 acres of arable land around the village which the family farmed. The Constables’ social position, and the fact that his father owned a large portion of it, gave the young Constable unfettered access to much of the land around his childhood home and an intimate knowledge of its gently rolling hills, picturesque villages, green riverbanks and luxuriant meadows. It was this visual reservoir, accumulated during the halcyon days of his childhood exploring along the banks of the Stour, that would not only inspire Constable’s earliest endeavours in paint but provided him with much of the raw materials for many of his greatest paintings.

It was also here, in this small area of Suffolk, that Constable met and befriended many of the people that would shape his later career. John Dunthorne, an early friend and mentor whose son would become Constable’s faithful studio assistant, owned the cottage near the gates of his parent’s house; John Reade, who lived at Old Hall, a large manor house opposite Golding Constable’s at East Bergholt who encouraged the young artist and let him sketch in his park; Dr Rhudde, whose granddaughter Maria became Constable’s wife, was vicar of East Bergholt Church; Sir George Beaumont, an early patron who played an important role in encouraging his love of painting, often visited Dedham to see his mother; and, most importantly of all, Dr John Fisher (1748-1825), later Bishop of Salisbury. In Constable’s youth Fisher lived at Church Farm – the cottage depicted in The Glebe Farm – near Langham, just across the Vale from East Bergholt, and the pair first met there in 1798.

Fisher, twenty-eight years Constable’s senior, became lifelong friend, mentor and one of the artist’s most important patrons. From 1807, as Bishop of Salisbury, Fisher was ex officio Chancellor of the Order of the Garter and was often referred to by contemporaries as ‘King’s Fisher’, in reference to his connection to the Royal Family. His patronage was therefore a valuable asset to Constable, beyond simply the paintings that he himself commissioned. It was also Bishop Fisher who introduced the young painter to his nephew, another John Fisher, later Archdeacon of Berkshire, who became Constable’s closest friend and another important patron in later life. It was at the younger Fisher’s house in Osmington, Doset, that Constable spent his honeymoon with Maria Bicknell, following their wedding in 1816, at which Bishop Fisher officiated.

The life force of the Vale was the river Stour itself, which was made navigable by Act of Parliament in 1705, resulting in thirteen locks being installed along its length between Sudbury and the coast. Before the arrival of the railways in East Anglia, rivers and canals were the main arteries for trade, and these locks enabled the horse-drawn barges for which the area was so famous to negotiate the differences in river level and travel both up and down stream with relative ease. Stour lighters were usually linked together in pairs and pulled by a single horse, so the locks were designed to accommodate two lighters at a time. Each lighter could carry up to thirteen tons, and by pairing up the tonnage could be increased to twenty-six tons per journey, far exceeding the weight that could be transported by horse and cart. On the downstream journey the Stour lighters carried a variety of goods, particularly milled flour and Suffolk bricks, bound for London, whilst upstream they transported Newcastle coal to power the Sudbury brick factories, as well as iron, oil and night soil (i.e. manure - both human and horse!) to spread on the fields as fertiliser.

Constable’s love for the essentially flat and un-emphatic landscape of his native Suffolk, with its ‘gentle declivities, its woods and rivers…’,1 so devoid of the sort of obvious pictorial potential that attracted artists and tourists alike to other regions of the country, such as the Lake District or Wales, was a notable deviation from the usual habits of contemporary landscape painters. Until at least 1821 Constable almost exclusively painted places that he knew, and with which he was completely familiar, in marked contrast, for instance, to Turner’s more typical practice and his voracious appetite for touring. This had obvious consequences for his art, for Constable knew his landscape, both over time and from numerous angles. He would have both seen it change over time and have been conscious of the degree to which a limited area of terrain could be differentiated topographically, with this local intimacy and memory both informing his paintings. This was a very different order of knowledge to that which most contemporary landscape painters possessed of their subjects and applies equally to the local industry and figural activity within his pictures as it does to topographical familiarity. These are the scenes of Constable’s childhood and he knows them with an intimacy that could be surpassed by no other artist. As he said himself – ‘…the sound of water escaping Mill dams… Willows, Old rotten Banks, slimy posts, & brickwork, I love such things… As Long as I do paint I shall never cease to paint such places. They have always been my delight.’

Constable’s own description of his work as an ‘admirable instance of the picturesque’,2 closeting his work in the language of the academy, belies the revolutionary nature of this unique choice of subject matter. Indeed, it was his very subjects, as much as his loose, impressionistic handling of paint and ground-breaking treatment of light, that so transformed landscape painting in Europe and so inspired a younger generation of artists. View painting had, until this point, been exclusively dominated by the classical tradition of academic landscape, in the manner of Claude Lorraine and Gaspard Poussin, and had been propagated in England during the eighteenth century by artists such as George Lambert, Richard Wilson, even Gainsborough and the early works of J.M.W. Tuner. Constable’s monumental Stour Valley paintings, however, challenged convention by depicting un-idealised everyday landscapes on a grand scale traditionally reserved for religious and historical subjects, thus elevating the seemingly mundane to the heroic through scale. In this he pre-empted the work of artists such as Gustav Courbet and the French realists of the Barbizon School, including Jean-Baptiste-Camille Corot and Jean-François Millet, by twenty years.

Eugène Boudin too, the man who taught Monet to paint landscape, was heavily influenced by Constable’s work. It was the exhibition of The Hay Wain at the Paris Salon in 1824 (where Constable won a gold medal), followed by The White Horse at the 1833 Exposition National des Beaux Arts in Brussels, which first introduced his work to the French school of landscape painters and set in train a revolution in European art that would find its fullest expression half a century later in the work of the French Impressionists.

During the 1870s both Monet and Picasso studied Constable’s work in London, and in 1873 Van Gogh acknowledged his debt to the English artist in a letter to his brother Theo, written from London. Whilst all these artists were influenced by the freedom of Constable’s brushwork, it was as much his subject matter as his treatment of paint that they found so radical, and so inspirational. The everyday, the ordinary and the commonplace made extraordinary. The ignoble made noble, a subject fit for the realms of high art. Look, for example, at Monet’s famous haystacks, or the landscapes of Alfred Sisley, Camille Pissarro and Vincent van Gogh, and find their inspiration in Constable’s Stour Valley paintings. Even today Constable’s art continues to inspire and influence, as was acknowledged by the late Lucien Freud who was both directly inspired by Constable’s work and saw his influence in the work of earlier 19th and 20th century painters – ‘I may be quite wrong’, he said, ‘but I can’t see Van Gogh’s Boots without Constable behind them’. 3

2. From a letter from Constable to Archdeacon Fisher, in John Constable’s Correspondence, VI, The Fishers, ed. by R, B. Beckett, Ipswich 1970, p.155. 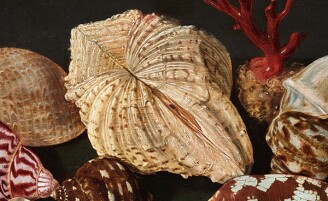