A reflection of the continent’s diversifying locales and technological innovations, 19th-century European art uniquely captures the subjects of its time while also nodding to a romanticized past. Depictions of bustling cities and contemporary fashion can be found alongside orientalist fantasies and idyllic rural scenes. The auction presents a perfect opportunity for an aspiring buyer to start a comprehensive and informed collection of the period’s varied artistic genres and movements. Ahead, discover eight quintessential 19th-century works of art.

The Realist movement in France was an important development during the 1800s and remains a popular genre for collectors of this category. The Realists sought to represent the nobility of everyday life in rural areas by rejecting the idealization of romanticism. Julien Dupré was among the most celebrated French Realists, and this powerful composition of a water carrier demonstrates the artist’s desire to dignify the life of peasants in his compositions. 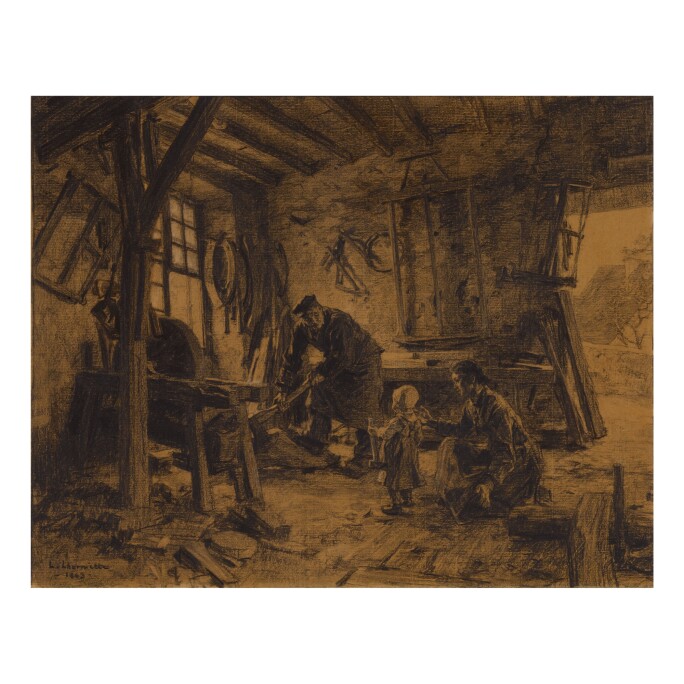 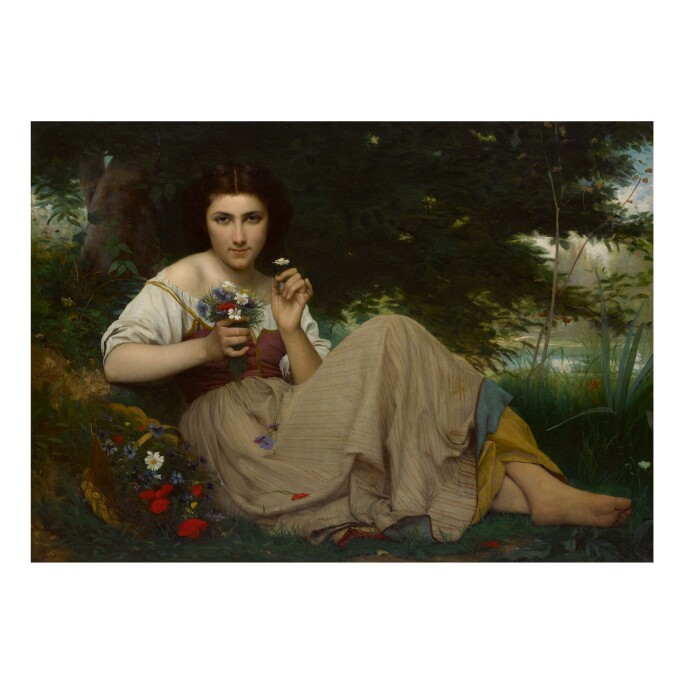 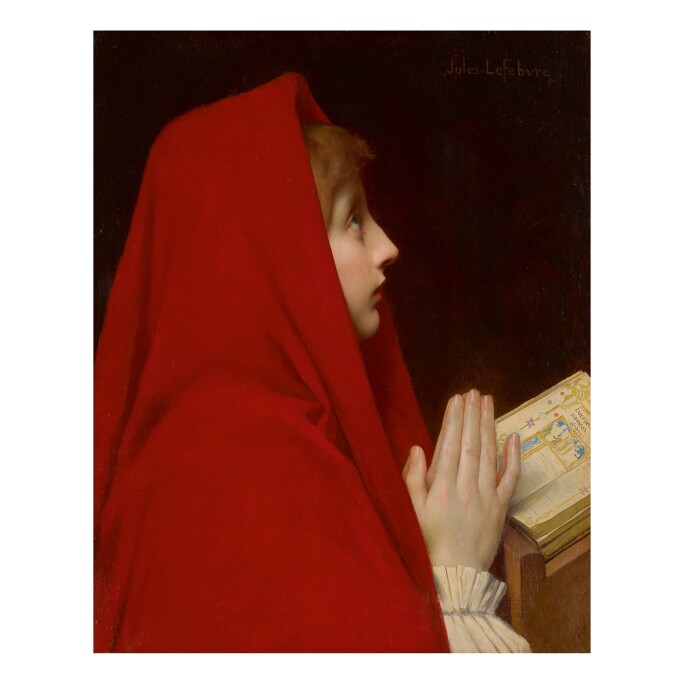 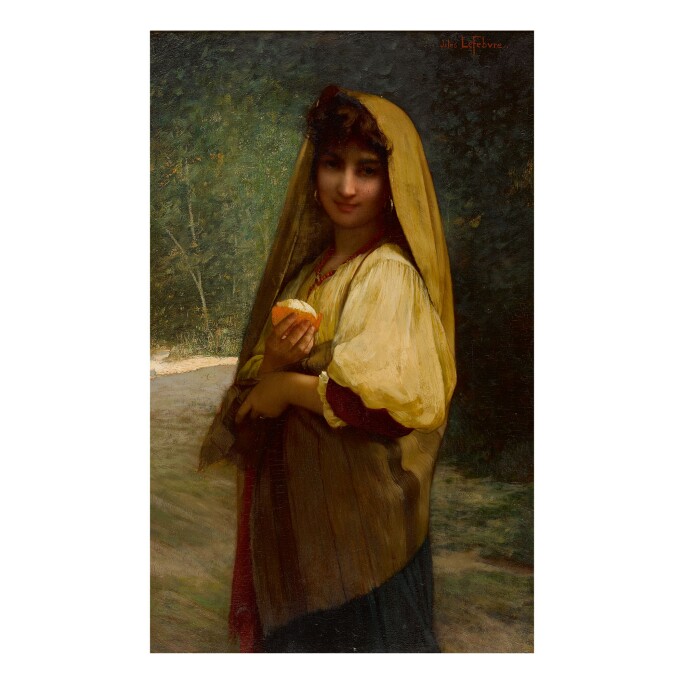 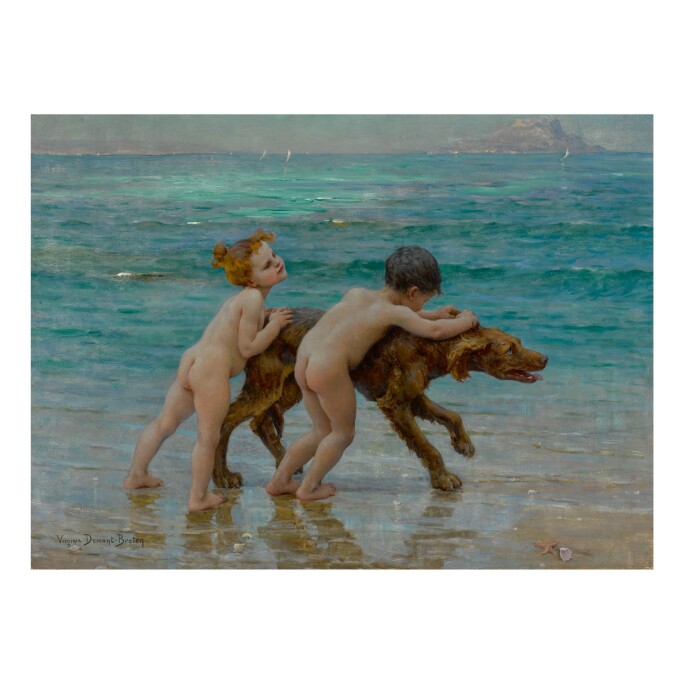 The genre of landscape painting in France was transformed and elevated by the master Jean-Baptiste-Camille Corot, who is an important staple in this category not only because of his contribution to this genre but also his profound impact on a later generation of landscape painters: the Impressionists. Claude Monte once remarked, “There is only one master here—Corot. We are nothing compared to him, nothing.”

Corot’s compositions are known for their inventiveness and painterly freedom, and he completed countless oil sketches and drawings in nature, many in his beloved Forest of Fontainebleau, in order to capture the transient effects of light. This sketch, which borders on abstraction, showcases Corot’s ingenuity. 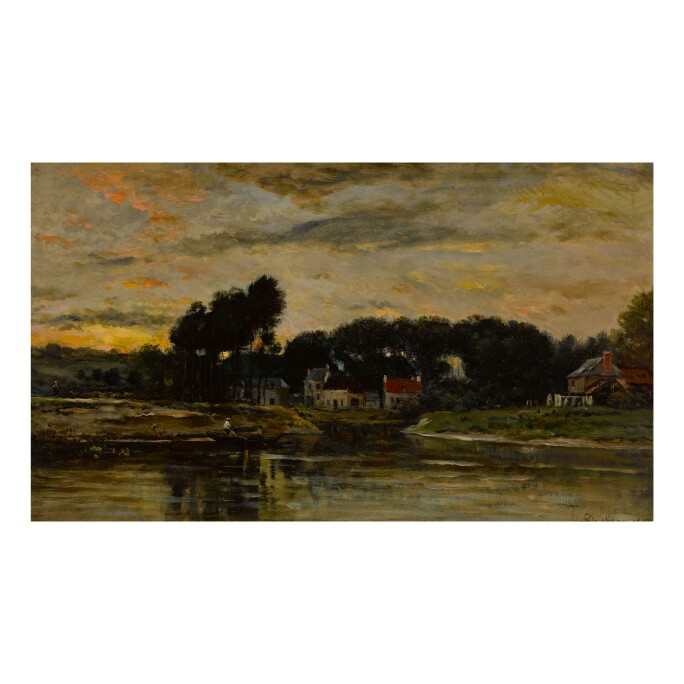 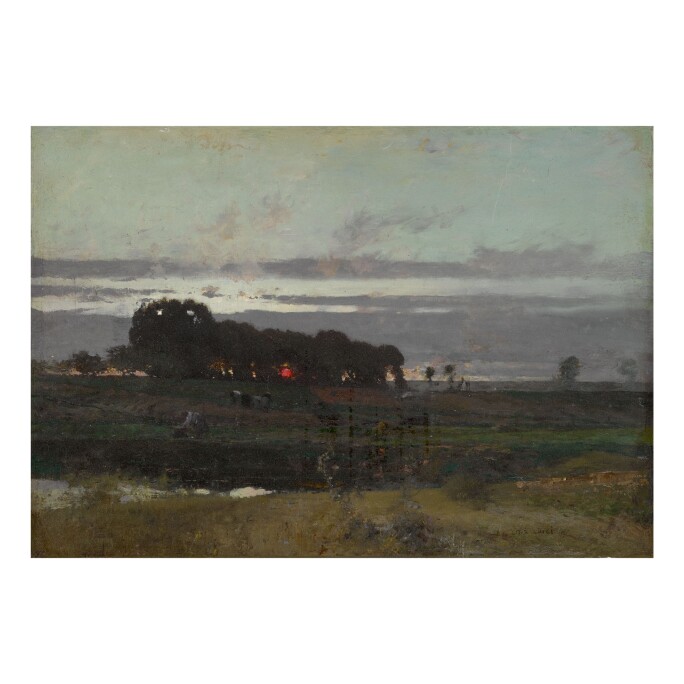 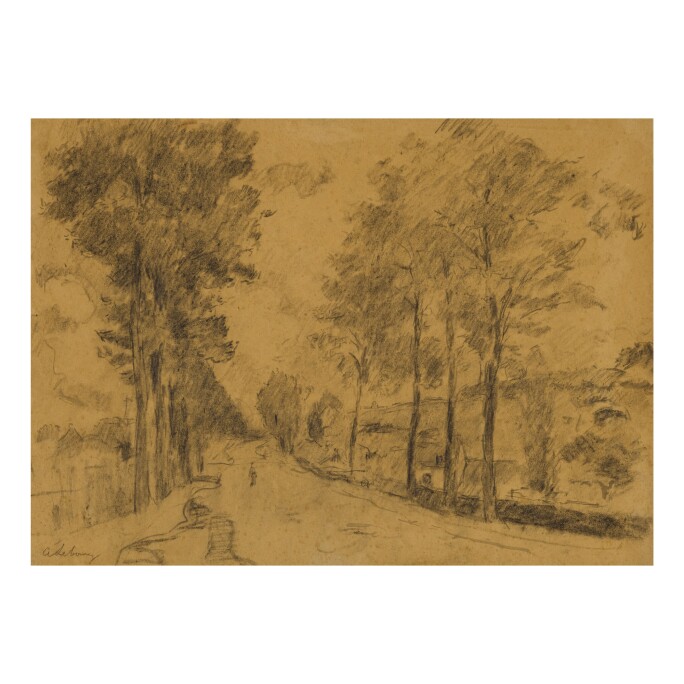 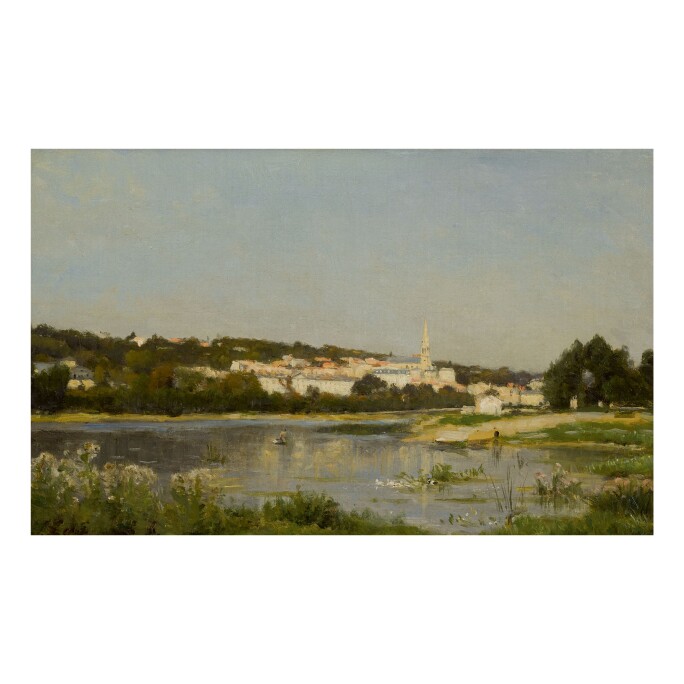 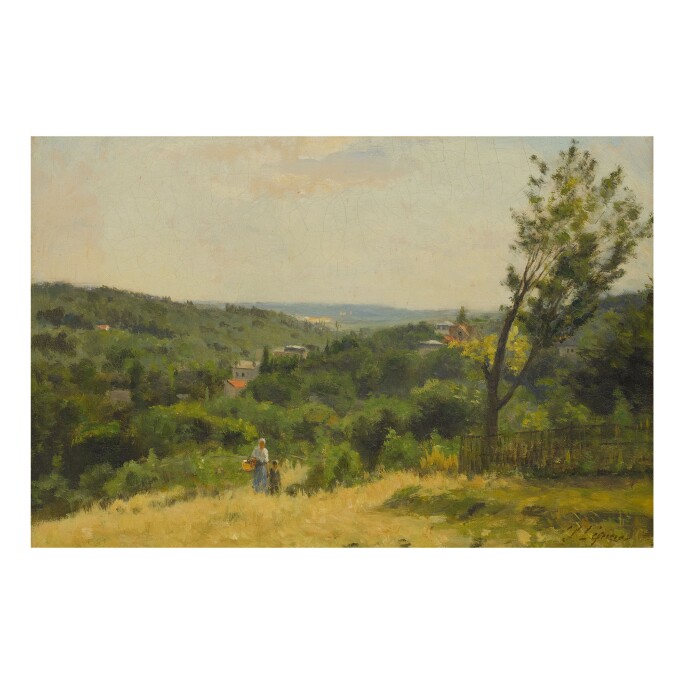 Fanciful historical settings, complete with elaborate costumes in vivid colors, indulge in the romantic ideals of bygone era. 19th-century painters of this genre were particularly interested in preserving elements of the past in a rapidly modernizing world. This lot by the Spanish painter Juan Pablo Salinas harkens back to the powdered wigs, opulent fashions and luxe interiors of the eighteenth century. 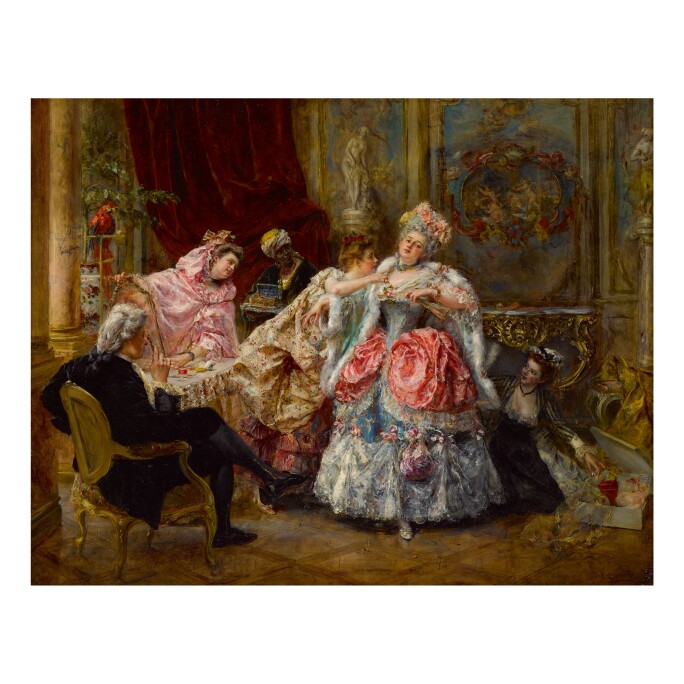 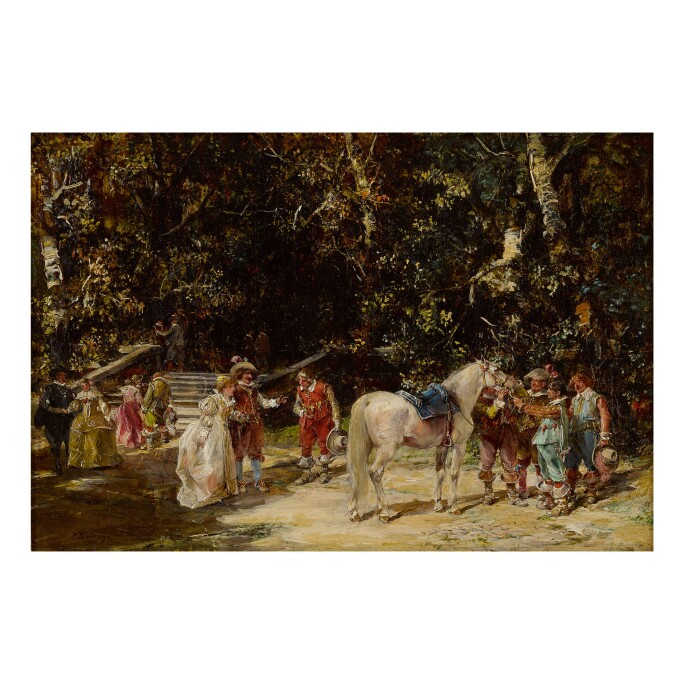 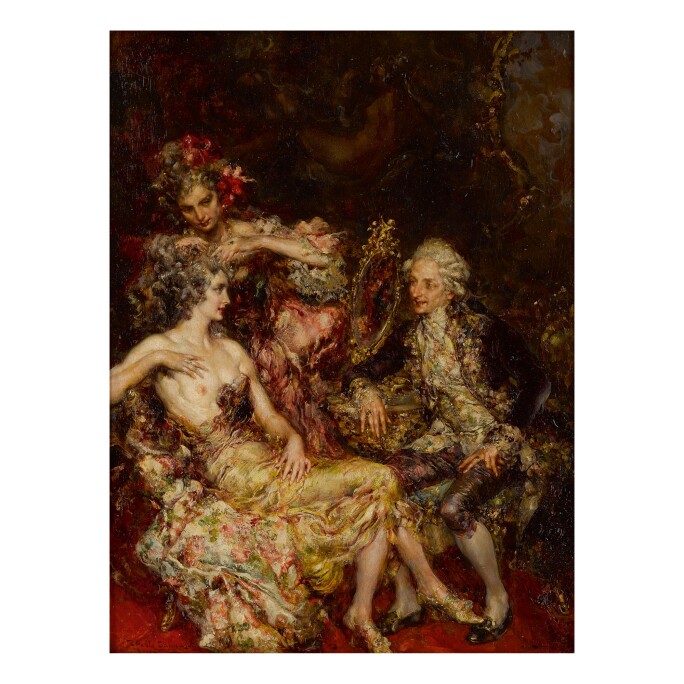 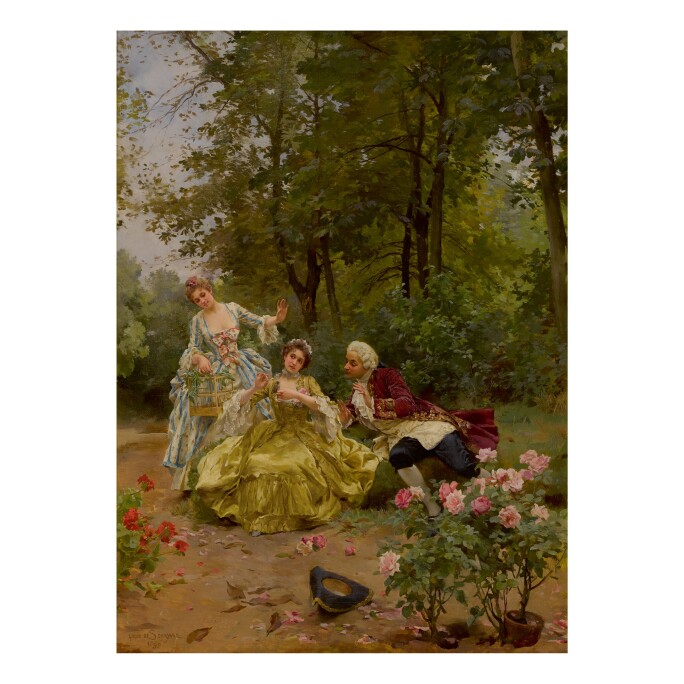 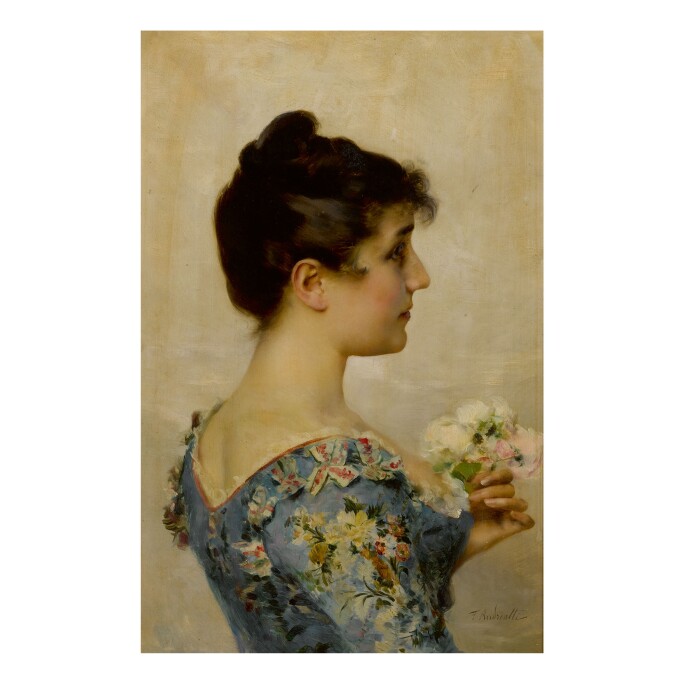 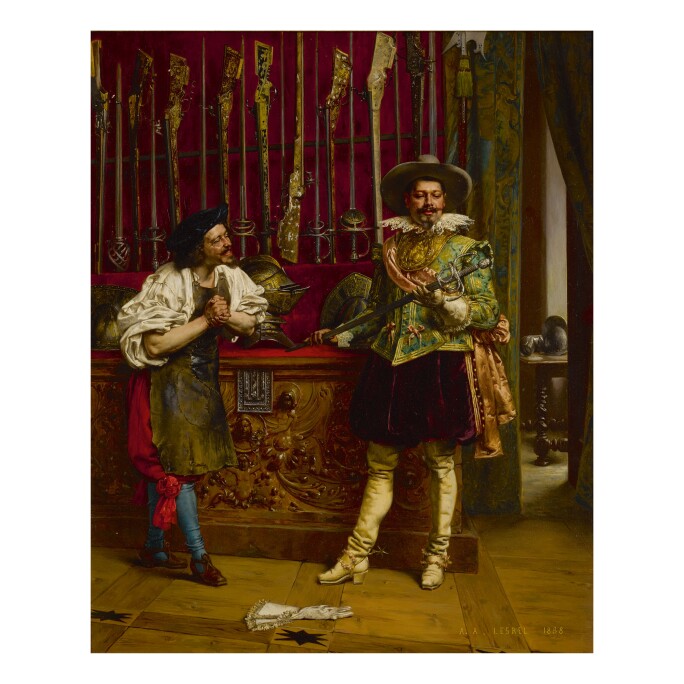 Following in the footsteps of Eugène Delacroix and Jean-Léon Gérôme, among countless others, 19th-century European artists traveled to North Africa and the Middle East to witness foreign cultures and decorative traditions firsthand. In the present lot, the Spanish painter Mariano Bertuchi has chosen a busy intersection of marketgoers, travelers and families in the city of Tétouan, Morocco while paying homage to the vivid colors and beautiful light of this arid landscape. 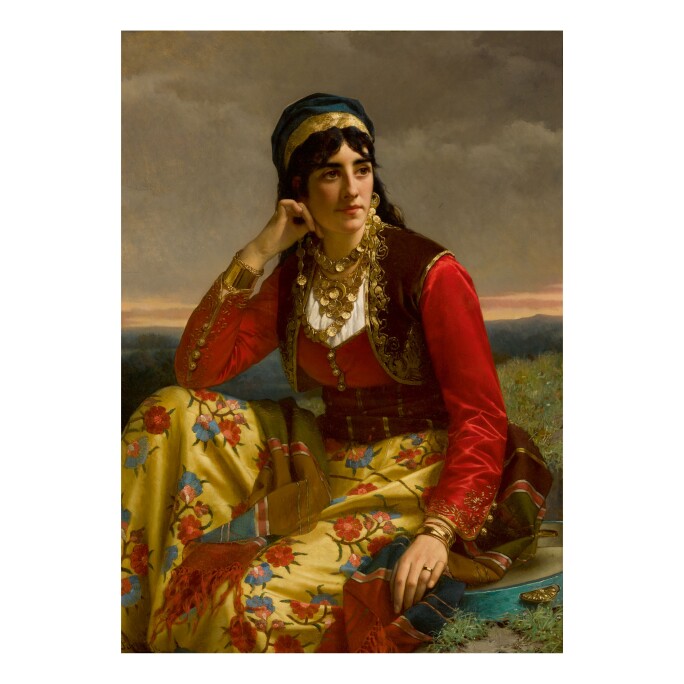 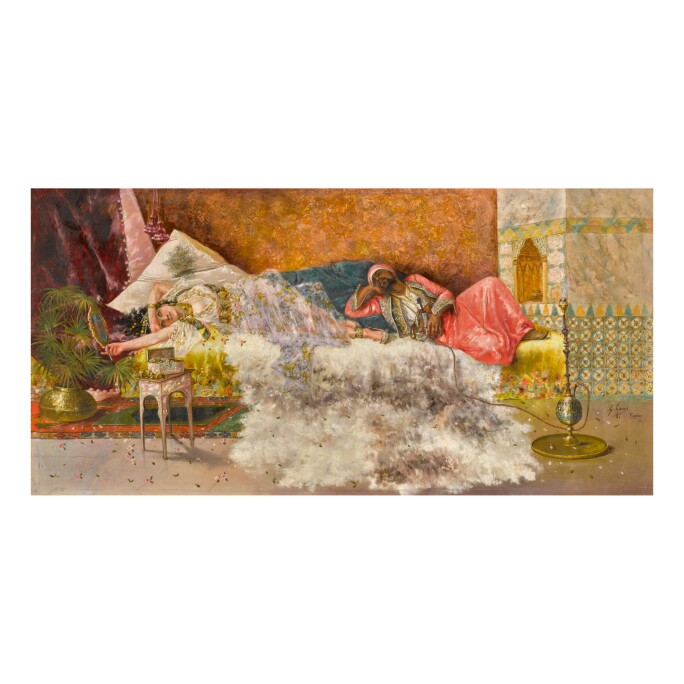 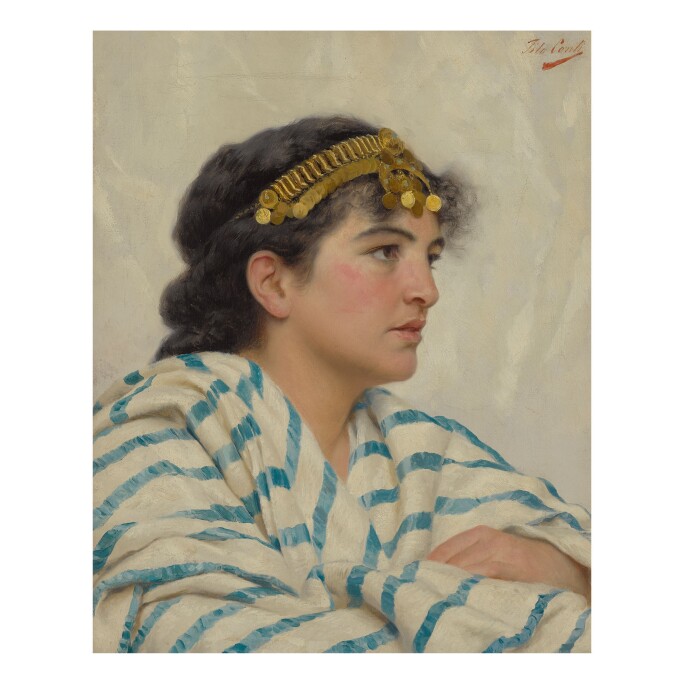 In late-19th-century England, the Pre-Raphaelite Brotherhood inspired an artistic interest in historical, literary and folklore subjects and a return to the compositions of medieval and early Renaissance Europe. Though not an official member of the Pre-Raphaelite brotherhood, Simeon Solomon was profoundly inspired by them. For the present lot he chose the timeless subject of Romeo and Juliet, for Shakespeare had found a renewed appreciation in Victorian England.

Full of fascinating characters, vibrant encounters and fashionable spaces, Belle Époque Paris offered limitless subject matter for painters of modern life. Stanislas Lépine painted many works featuring some of the city’s most popular and elegant public spaces, such as Jardin des Tuileries and Jardin du Luxembourg, which is the subject of this composition. 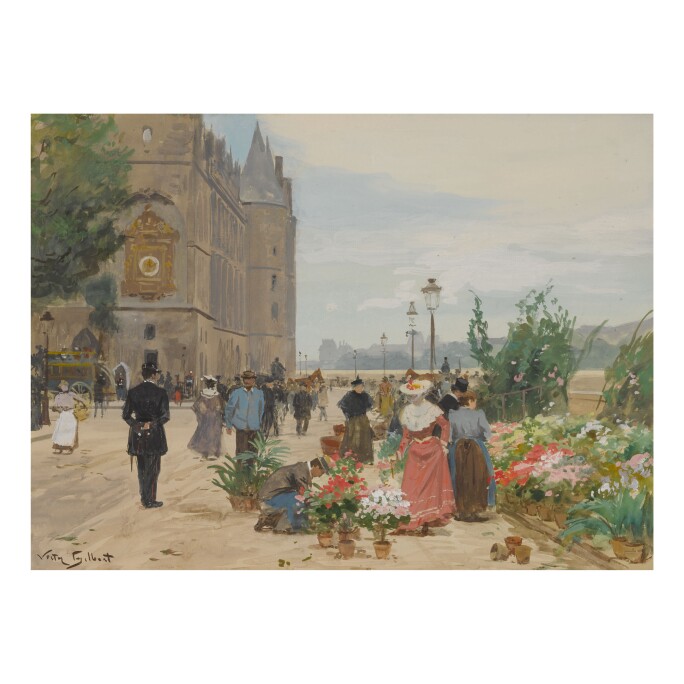 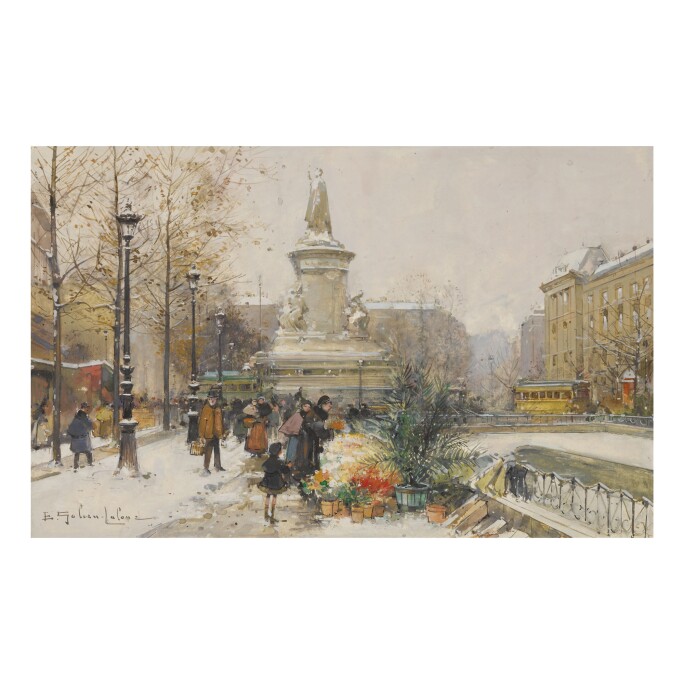 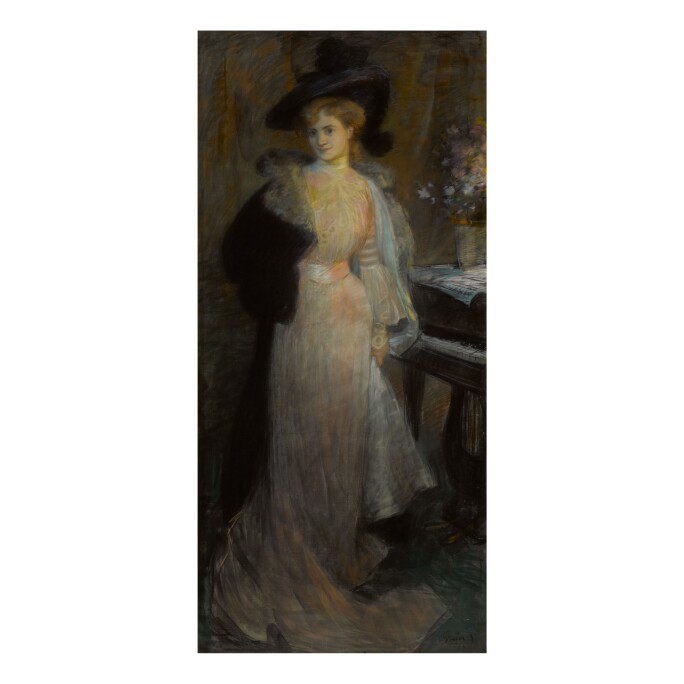 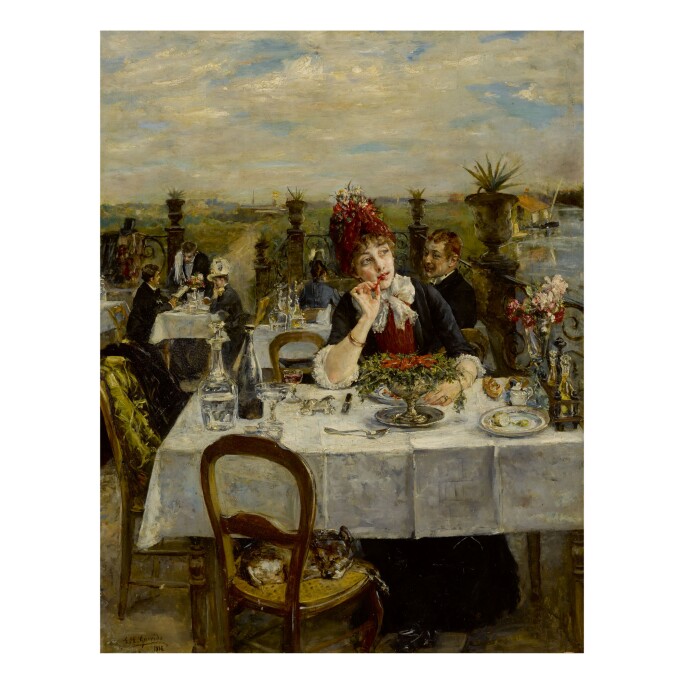 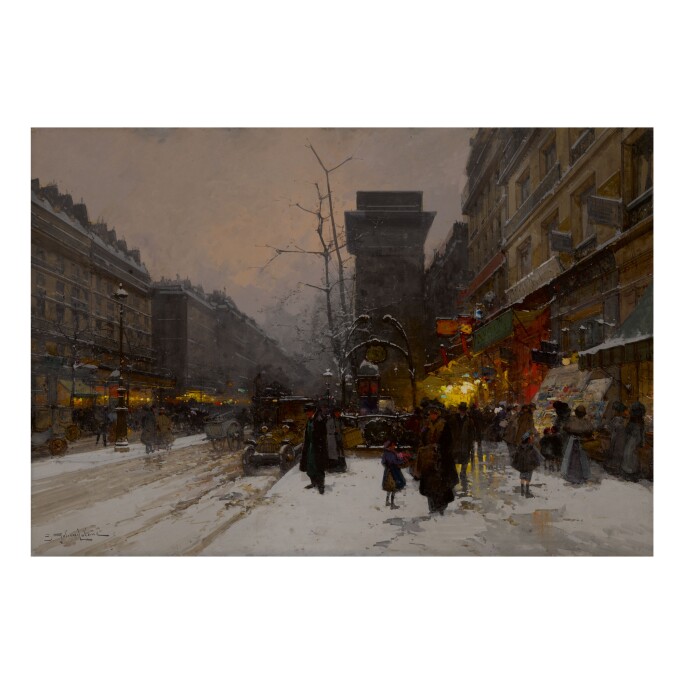 Venice has always been a favorite city of artists inspired by its rich history, vibrant colors and superior status as Europe’s gateway to the East. Numerous 19th-century painters carried on this tradition. While some artists chose its architecture and canals as their focal point, Eugen von Blaas was captivated by its inhabitants. He was drawn particularly to its young people, their elaborate costumes and how they lived a seemingly carefree existence with Venice’s crumbling façade as a backdrop.

Celebrating the traditions of turf and hunt, sporting art has pride of place on the walls of fine country homes on both sides of the Atlantic. For many painters it was a means of preserving the traditions and values of an old world, which was beginning to fade during this industrial age. The French painter Jean Richard Goubie was fascinated by horses and often depicted them mounted by elegant riders or hunters of the bourgeoisie. 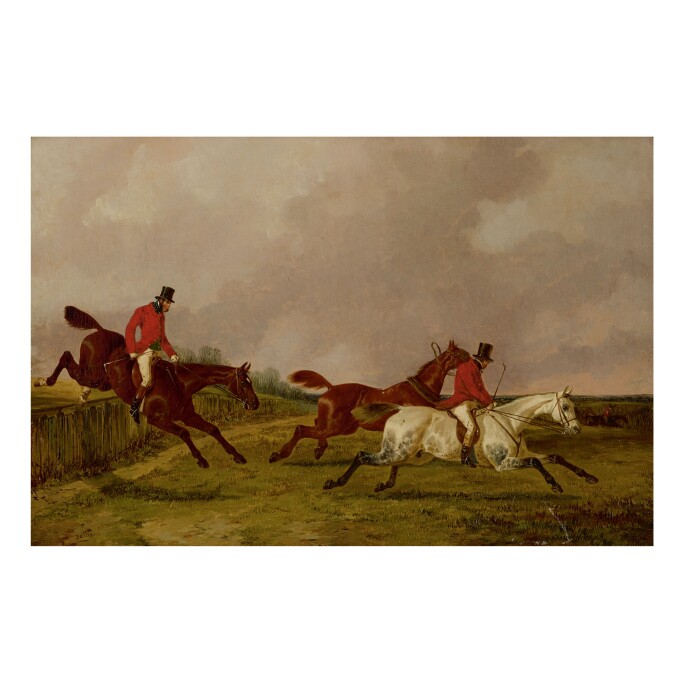 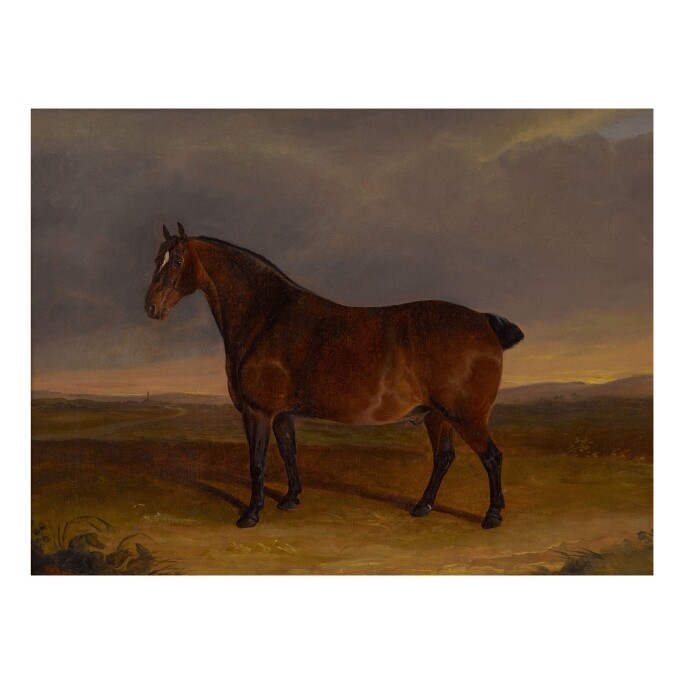 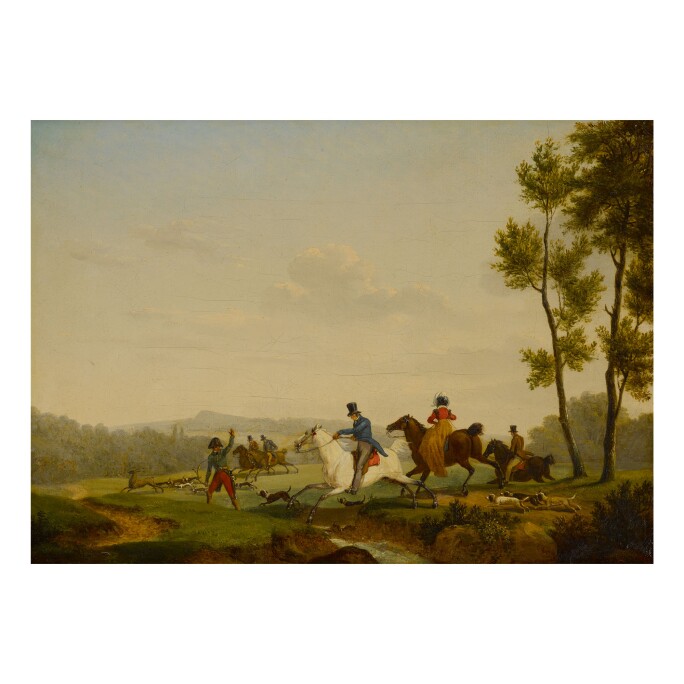 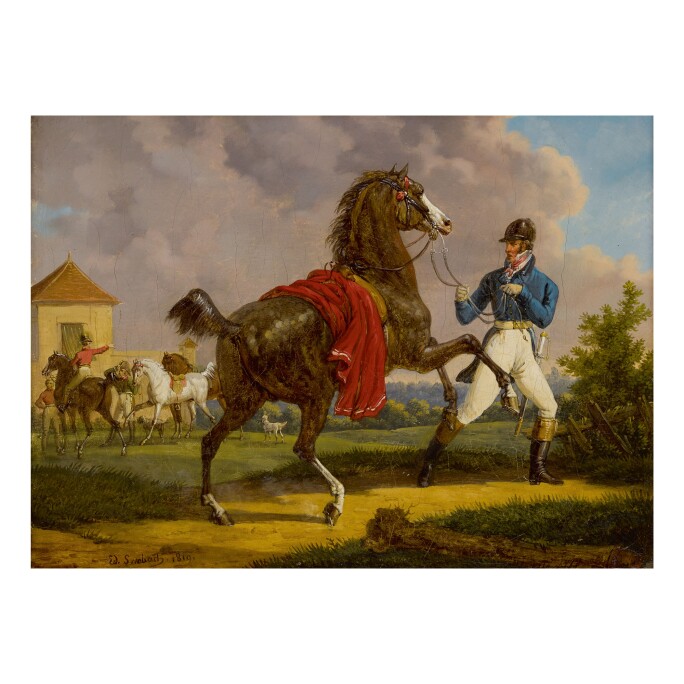 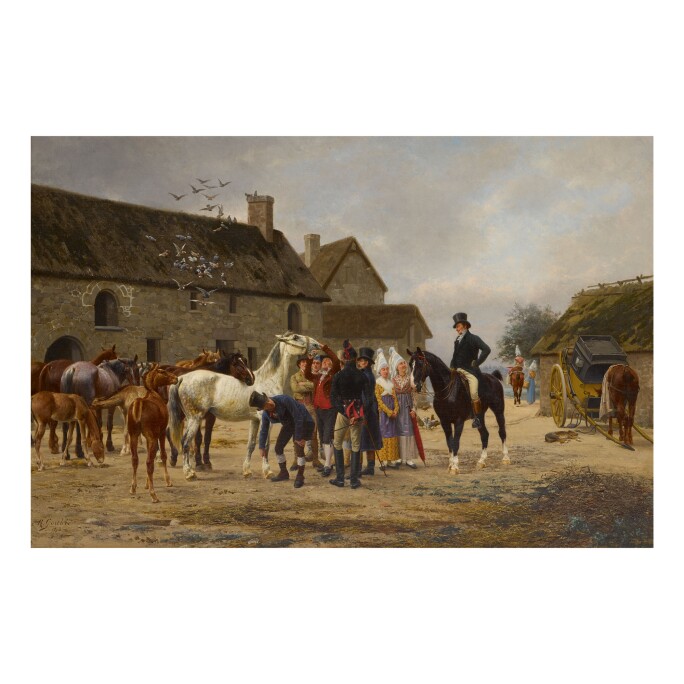 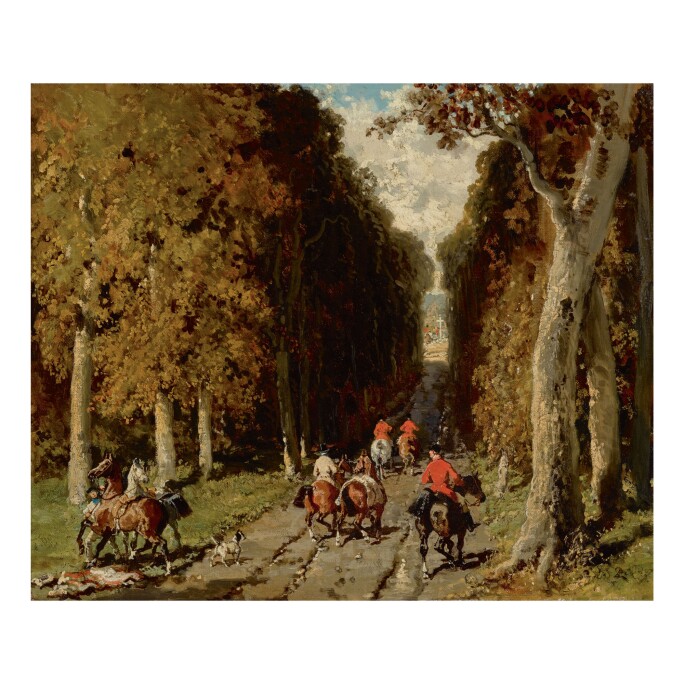