The Audemars Piguet Royal Oak: Evolution of Design and Innovation

W idely recognised as one of the most iconic watch designs ever produced, Audemars Piguet’s Royal Oak has rightly taken its place in the history books. Created in 1972 during a bold new era for watch design, this wristwatch with a "body of steel and heart of gold" saved the world of luxury watchmaking, according to legend. As the famous origin story goes, Audemars Piguet had took a giant risk in moving forward with the rule-breaking Royal Oak, and as a result revolutionised the industry with a brand-new category of horology. Yet, those who follow Audemars Piguet's technical and aesthetic achievements might consider this less a revolution than a natural evolution within the history of the brand.

Audemars Piguet debuted many of the world’s firsts: minute repeater wristwatch in 1892, the skeletonized watch in 1934, and the thinnest wristwatch in 1946. Within the manufacture's many achievements, the Royal Oak may be its most celebrated contribution to the history of watchmaking, because it introduced the very first luxury sports watch and even presaged the way we wear timepieces today. These inventions were often ingenious adaptations to the changing demands of the times. Taking the 1970s as the midpoint, a look backward and forward through the milestones of Audemars Piguet reveal a clear through line of technical innovation.

A History of Horological Achievements

Founded in 1875 in the Swiss village of Le Brassus, Audemars Piguet has long been one of the most esteemed watchmakers in the world, priding itself on ancestral expertise and drive for innovation. Jules Louis Audemars and Edward Auguste Piguet were respectively fourth and fifth generation watchmakers with successful careers in the industry. When Audemars and Piguet joined forces, the emergence of industrial machinery and serial production had already begun its encroachment upon traditional watchmaking techniques. During these times, the two friends held to hand-crafting complicated mechanisms and established themselves as masters of ultra-complicated pocket watches.

Audemars Piguet played a pioneering role in the development of the wristwatch, serving at the foundation of the brand’s experimentation in form and function.

Quite significantly, they also lent their horological expertise in crafting the movements of timepieces for women, who in the fashion of the times wore them as pendants, brooches or rings – and by extension, the wristwatch which was regarded as ladies’ jewellery. These were all painstaking technical feats in miniature. In the broader context, it was thus that Audemars Piguet played a pioneering role in the development of the wristwatch, serving at the foundation of the brand’s experimentation in form and function.

The Near-Downfall of the Mechanical Watch

Fast forward to 1970 when the so-called “quartz crisis” was wreaking havoc on the Swiss watch industry. The emergence of quartz-powered movements presented an alternative that was cheaper, accessible and more durable than dress watches of the time. This created an existential crisis for traditional mechanical watchmakers. Consumers were also adopting more active lifestyles and enjoying extreme sports. Against a global backdrop of cultural changes and depressed economy, highly complicated (and fragile) dress watches were perceived as increasingly out of step with the times.

In response to the upheavals, an Audemars Piguet executive called legendary designer Gérald Genta on the eve of the Basel Watch Fair. Genta was asked to imagine a new category of fine watches that would be audacious and futuristic; they would appeal to a new generation of clients. And most importantly, they would be made of stainless steel. The next day, the Audemars Piguet unveiled sketches for the Royal Oak.

At the time, steel was still regarded as an unconventional material, too utilitarian to be used in Haute Horlogerie. Fine watches had up until then been almost invariably gold or platinum. Named after the legendary royal oak that saved King Charles II of England in battle as well as the steel-hulled warships of the British Navy, the Royal Oak accorded stainless steel the status of a worthy and noble material. There were also practical considerations. Steel was much harder to work than gold, so it required investment in new tools and techniques for the process of refined hand finishing; the trademark hand-polished and satin-brushed finishing reinforce the aesthetic lines of the timepiece.

The first Royal Oak models were fitted with the calibre 2121 movement, which was based on the calibre 2120 developed by Audemars Piguet in 1967, the world’s thinnest self-winding movement of the era with date indication, and an overall height of 3.05mm. The calibre 2121 was also equipped with a Gyromax balance and anti-shock system, which was housed in an extremely durable metal case, thus allowing the Royal Oak to withstand heavy impact. While the emphasis is often on the way Audemars Piguet created the first “luxury sport watch”, these innovations also underscore an important fact that the watchmaker was also a pioneer in ultra-slim movements. Six years after the unveiling of the Royal Oak, Audemars Piguet released the calibre 2120/2800, which sparked renewed interest and development in classic complications for the entire industry.

A steel watch that looks like a piece of machinery, for a price that steep?

Audemars Piguet debuted their avant-garde watch to a public that didn’t quite know what to make of it at first. The watch was introduced at a retail price of 3,650 Swiss Francs, which was a staggering amount for a stainless steel watch in the 1970s. By comparison, that made it more expensive than a gold Patek Philippe dress watch and more than ten times the cost of a Rolex Submariner. Beyond the issue of the material, the watch itself would have at the time looked odd or unconventional at best. Up until then, luxury watches typically varied little in size and aspect. Audemars Piguet's new watch broke many of the existing design codes. Genta’s vision took inspiration from a deep-sea-diving helmet. The sketch showed a rounded octagonal bezel secured with eight exposed hexagonal screws. The large 39 mm diameter tonneau-shaped case would earn it the nickname “Jumbo”. The integrated bracelet would be made of links descending in size, and the “Tapisserie” dial would be created by a precision metalwork chisel.

Breaking the Rules of Design

The Royal Oak represents an impressive innovation in design. In the greater context, this was largely in keeping with Audemars Piguet’s history of experimenting with unconventional forms and design language for more than a century. In fact, the earliest documented octagonal-shaped wristwatch was a diamond-set bracelet watch crafted by the Audemars Piguet in 1917. At the time, the watchmaker veered from 19th century classicism and explored fresh angular geometries such as trapezoids and octagons along with the more traditional rounds, squares and rectangles. Experimentation extended to unusual dials of varying materials, and colours through the 1920s and 1930s. Such innovations continued through the generations with asymmetry and juxtaposed geometries accentuated in the 1960s. Thus, the shockwave that was the 1972 Royal Oak had been consistent with the overall design philosophy of the house, and its approach to the present day only continues to be unapologetically futuristic, striking just the right balance of advanced technology and traditional savoir-faire.

The introduction of the Royal Oak along with the development of the calibre 2120/2800 set the stage for important technical and design approaches for Audemars Piguet in the 50 years that followed. Riffing upon its signature model, the Royal Oak had been produced in great aesthetic array, from varying sizes to the wide range of adopted materials – including platinum, titanium, ceramics, and gold – as well as different dial designs and colours. The collection has also seen the inclusion of complex complications and escapements – i.e., perpetual calendar, lunar cycle, minute repeaters, tourbillon, a double balance wheel mechanism, and Grandes Complications. 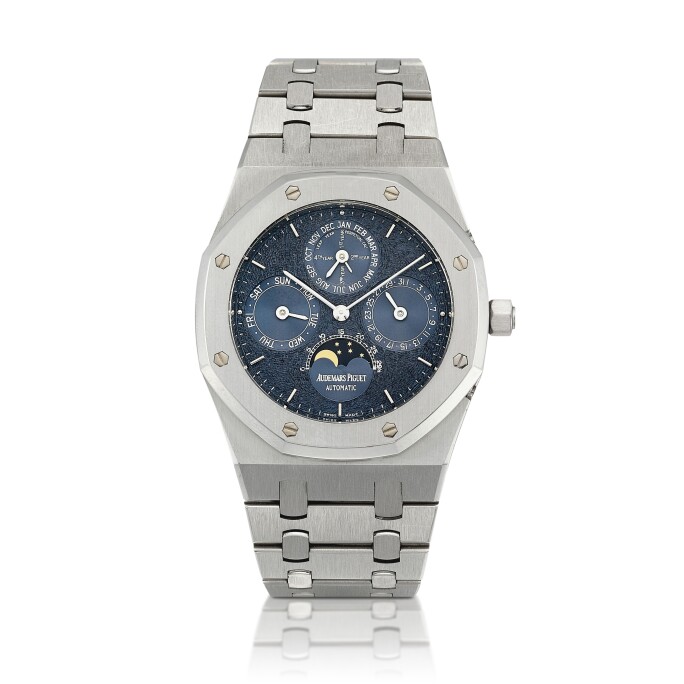 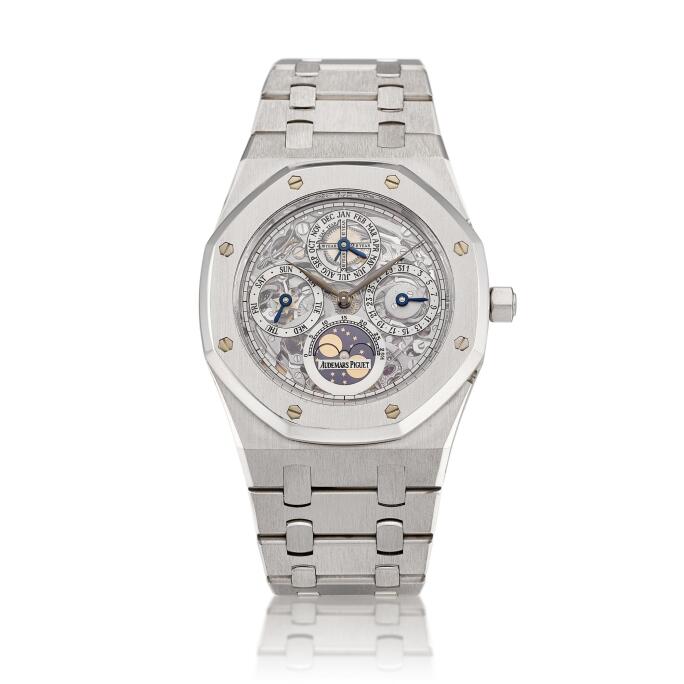 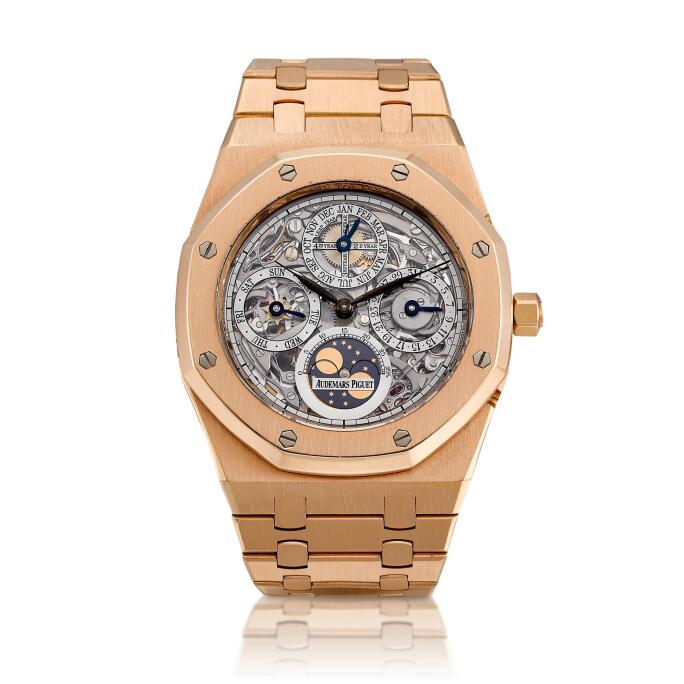 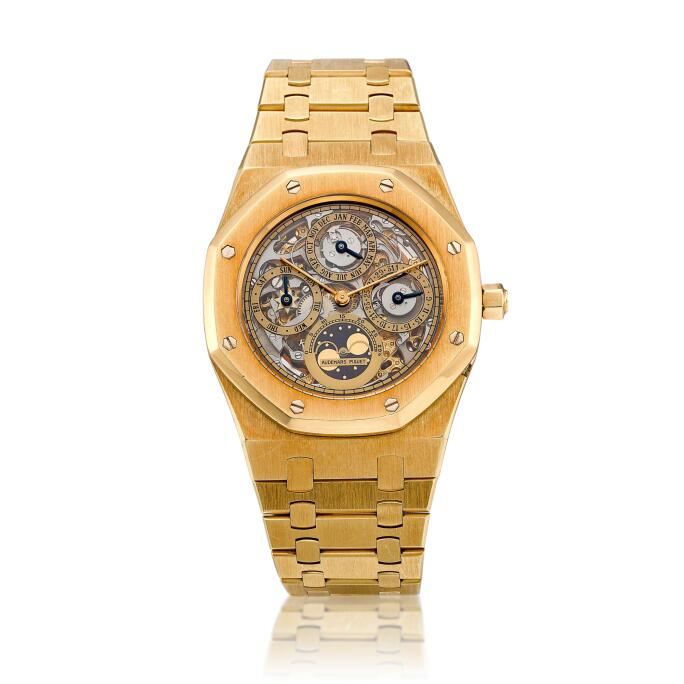 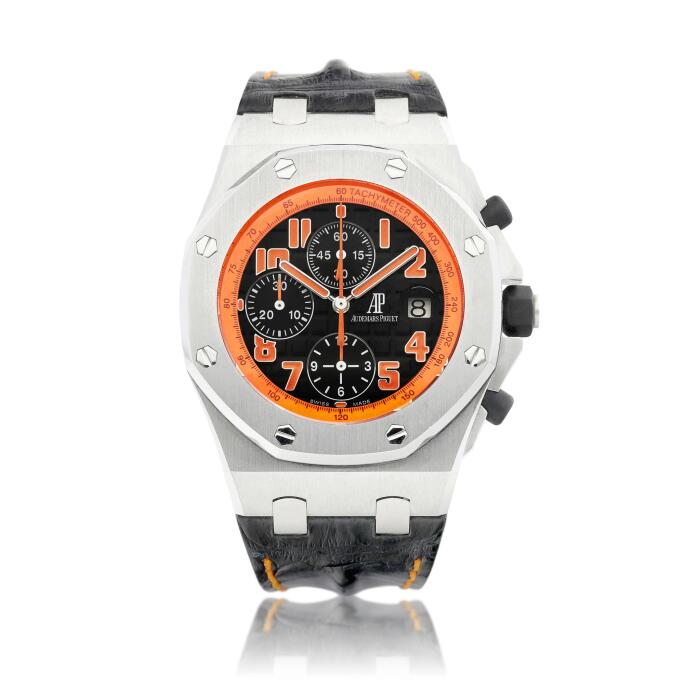 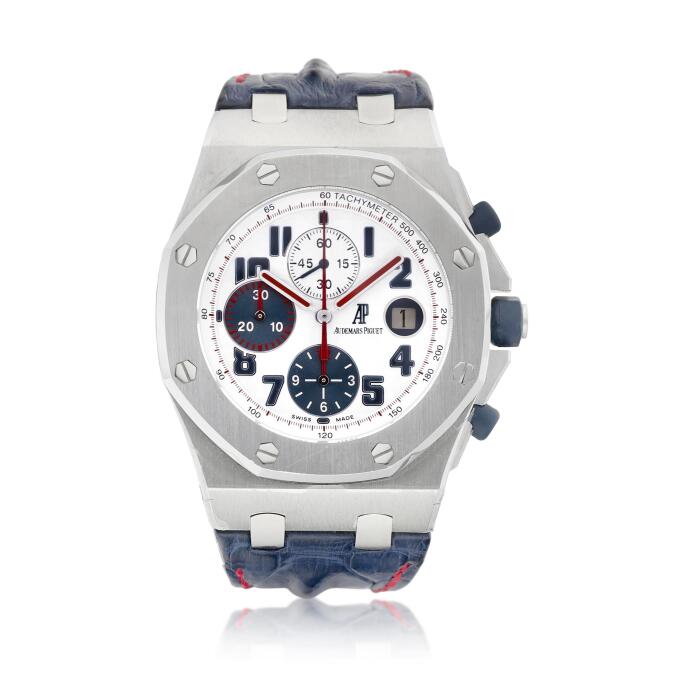 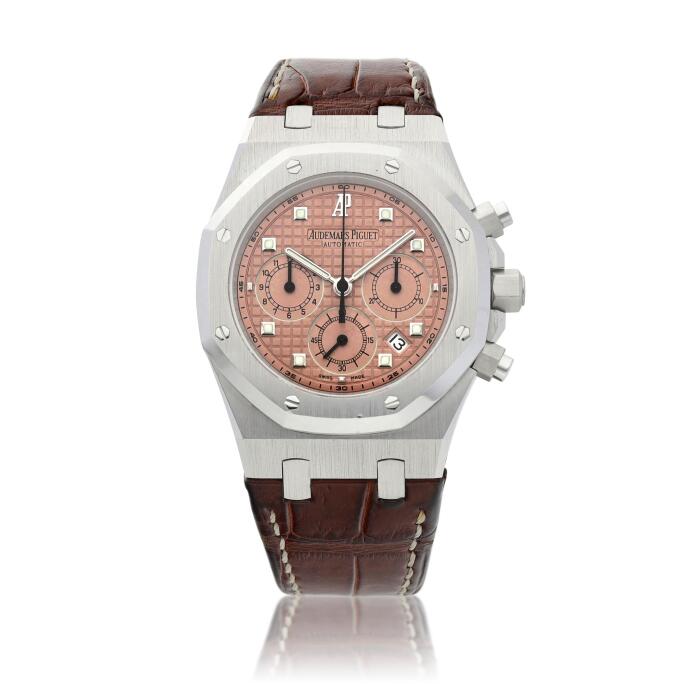 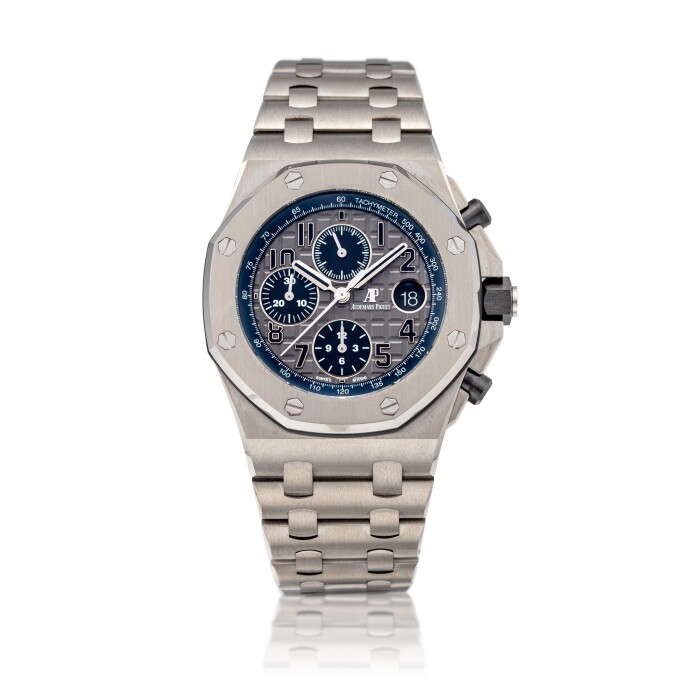 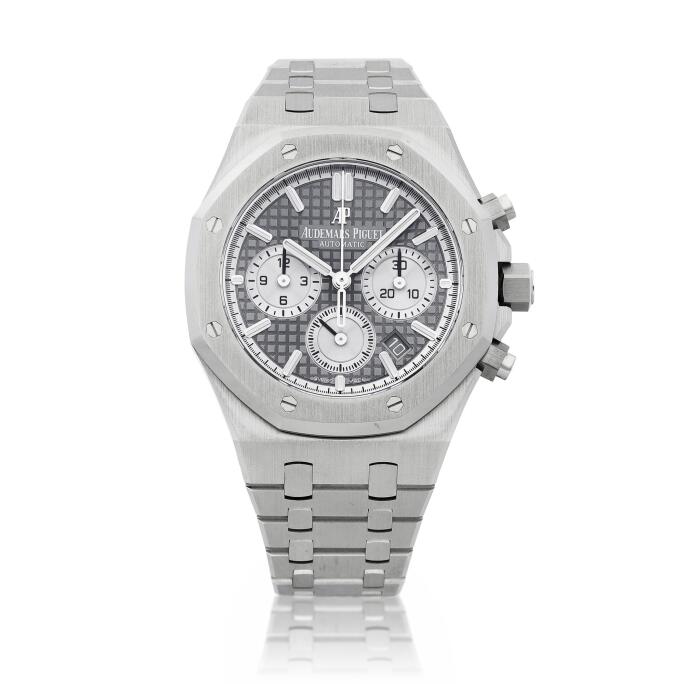 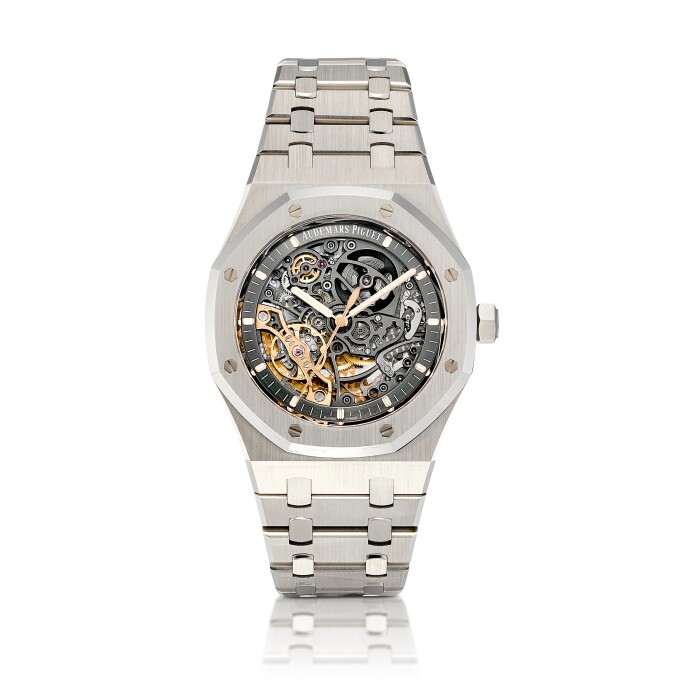 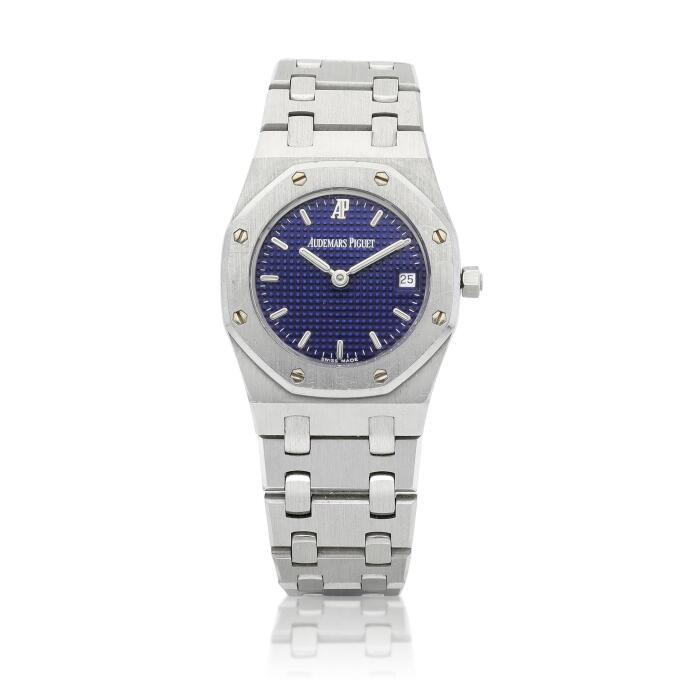 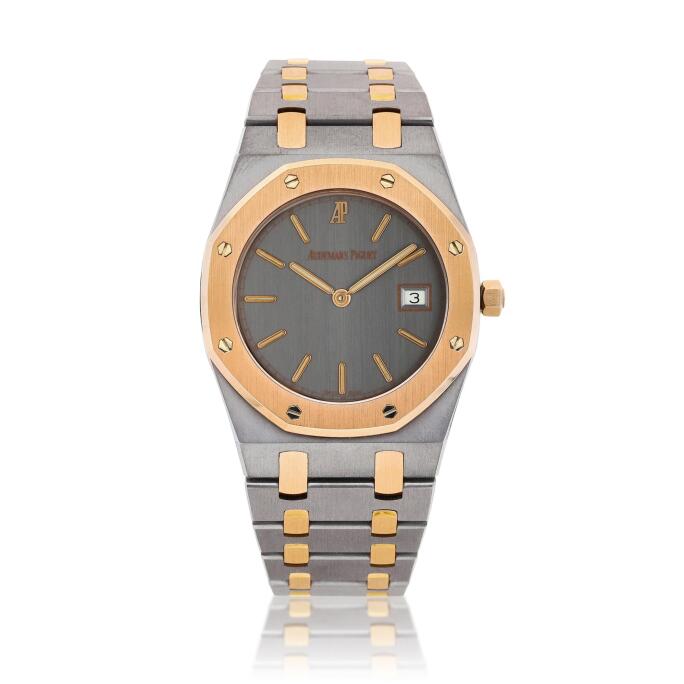 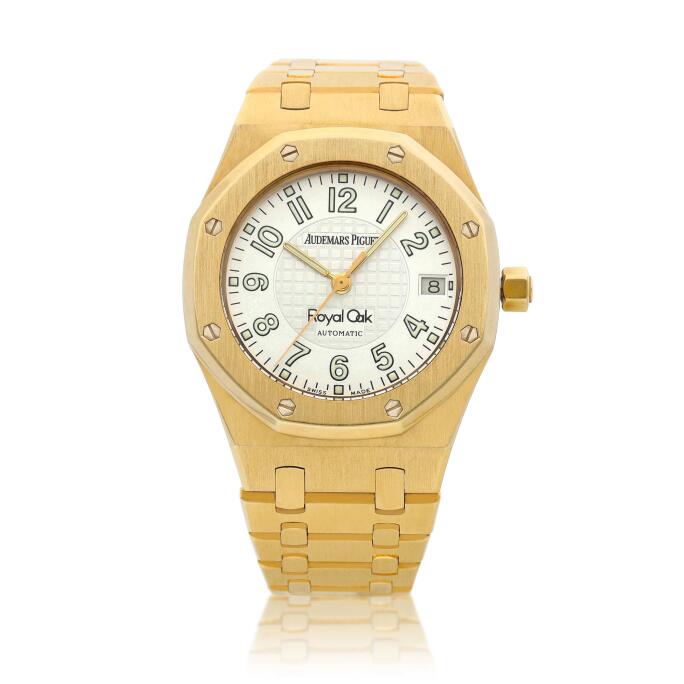 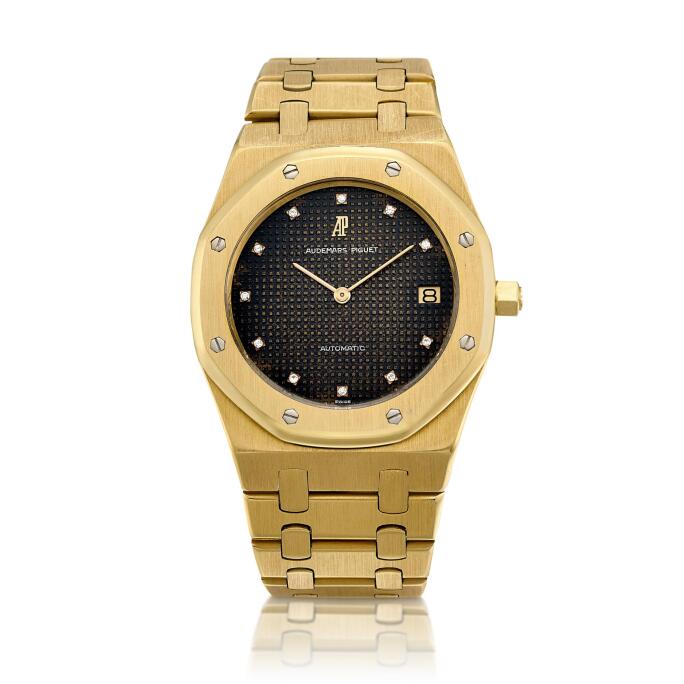 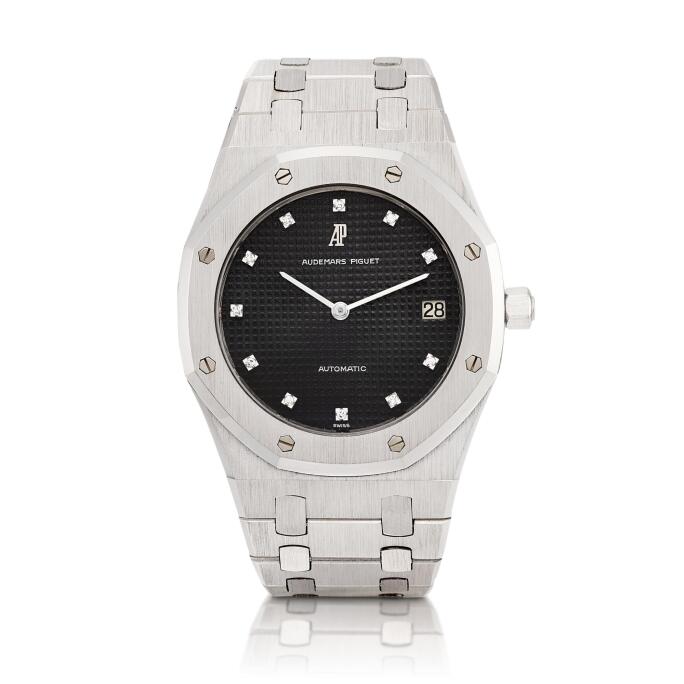 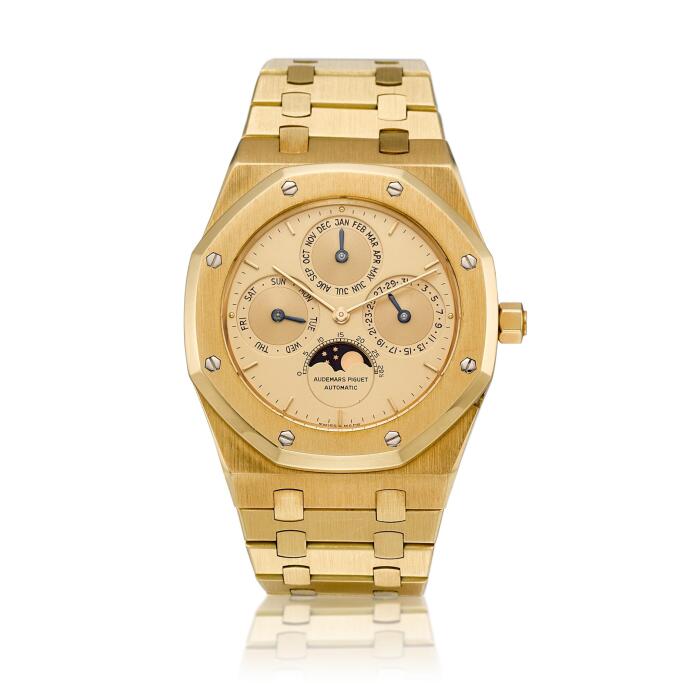 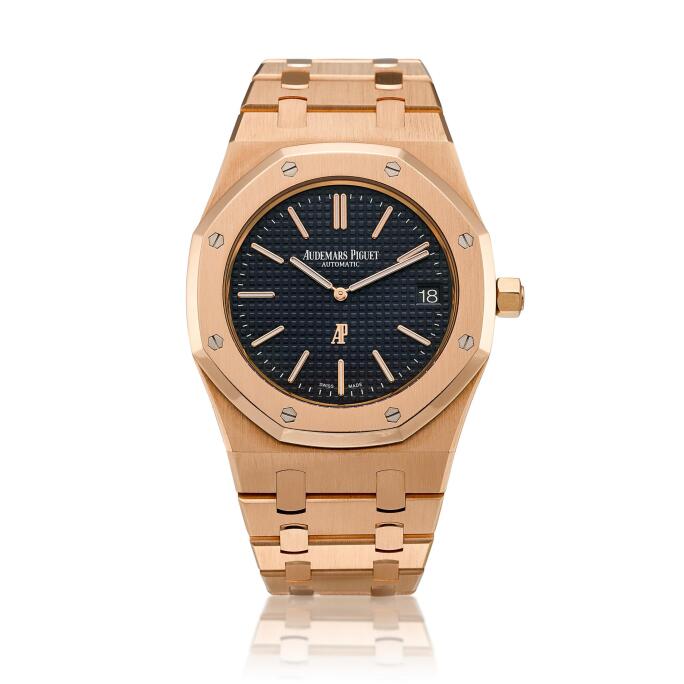 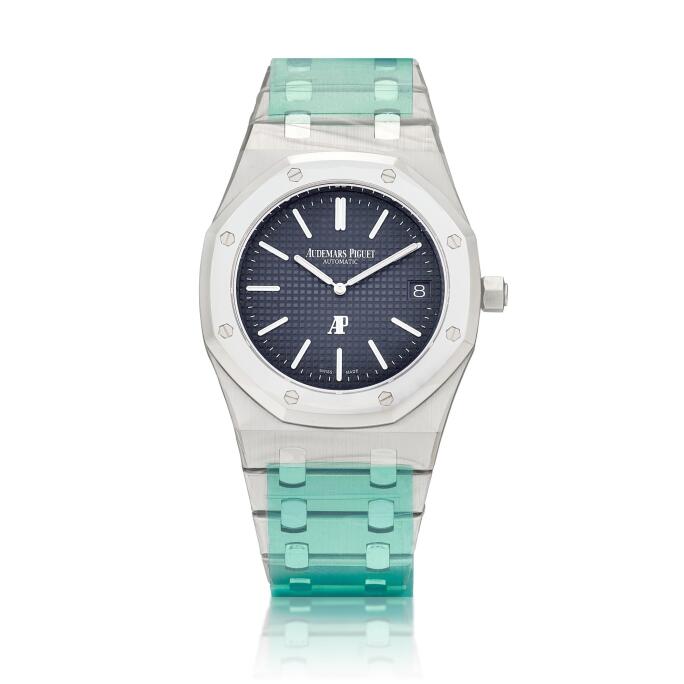 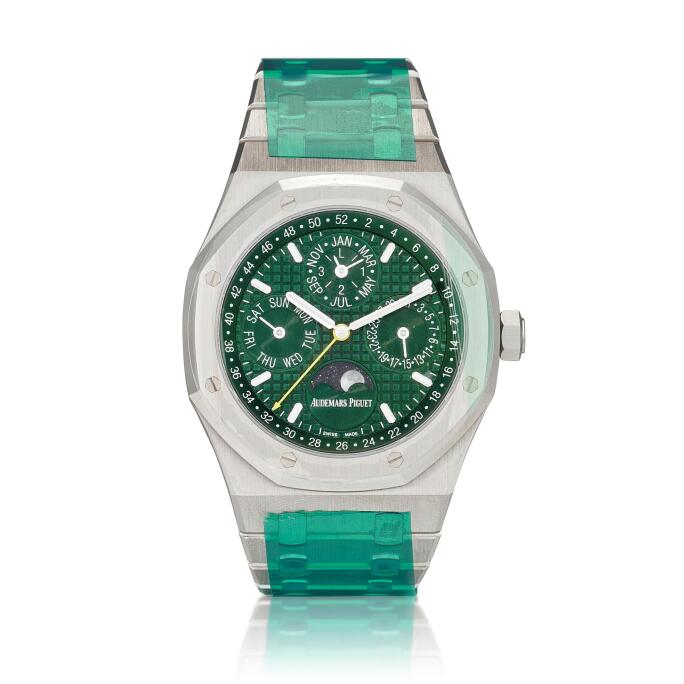 Ushering in the Future of Large Wristwatches

In 1993, Audemars introduced the Royal Oak Offshore, which revamped the Genta’s original design as a muscular package of 42 mm diameter and 15 mm in thickness. Nicknamed “the Beast” for the unprecedented, massive case size, this souped up reimagining of the iconic Royal Oak set the trend of large-sized watches. The new design improved upon the original with the inclusion of the chronograph complication, the curved bracelet links, rubber details, stylised crown protection, and the anti-magnetic cover for the movement. The launch of the Royal Oak Offshore was polarising at first, but quickly developed devotees among younger generations of watch collectors. Notably, Arnold Schwarzenegger was so impressed by the Royal Oak Offshore that he commissioned a customised version, which created a sensation when it appeared in his film End of Days. Since its introduction, the Royal Oak Offshore collection has evolved through a long developmental journey, with models crafted in connection with F1 racing, basketball players, and sporting events, plus more than 130 variations.

Beyond the Limits of Haute Horlogerie

Audemars Piguet celebrated the 30th anniversary of their most iconic wristwatch with a different interpretation of the original. The Royal Oak Concept represents another key design innovation, introduced in 2002 with a design inspired by the ultra-modern aesthetics of Concept cars, an exploration on what the brand believes the Royal Oak could look like in the future: advanced technical precision meeting cutting-edge micro-mechanics. The Royal Oak Concept makes use of materials used in the aeronautics industry, innovative and resilient alloys that are light and extremely durable. Continuing in a line from the 1972 Royal Oak, the Concept is truly a functional sports and lifestyle luxury timepiece that is like no other.

The Royal Oak Offshore and the Royal Oak Concept were two collections that further expanded the limits of Haute Horlogerie while also maintaining the core tenets of Audemars Piguet’s design achievements. The Royal Oak, which ranks among the most iconic and revolutionary timepieces in existence, was a natural progression for the watchmaker’s sense of unconventional design and precision engineering. In recent years, the Royal Oak Concept Supersonnerie, the Royal Oak Selfwinding Perpetual Calendar Ultra-Thin, and Code 11.59 demonstrate the way Audemars Piguet continues to look ahead. These collections promise to challenge traditional notions of value and redefine how we wear watches in the future. 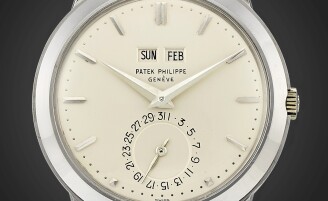