'A Solitary Place Suitable for Thinking'

O n 12 December at their Asian Arts sale, Sotheby‘s Paris will offer a rare and important album of 36 engravings by Matteo Ripa, titled Thirty-six Views of the Mountain Estate for Escaping the Summer Heat. It's a series of engravings commissioned by the Kangxi emperor in 1711 and is considered the earliest example of copperplate engravings created in China by a Jesuit artist.

‘A SOLITARY PLACE SUITABLE FOR THINKING’, LEAF FROM AN IMPORTANT AND RARE ALBUM OF 36 ENGRAVINGS BY MATTEO RIPA, THIRTY-SIX VIEWS OF THE IMPERIAL SUMMER PALACE AT REHOL, CA. 1711-1713.

While the exact history of this album remains unclear, we do know that it entered the important collection of Arthur-Auguste Brölemann (1826-1904), of Lyon, grandson of the well-known collector Henry-Auguste Brölemann (1775-1854), whose famed collection of medieval manuscripts and rare books was sold in Sotheby‘s London in 1926. The story that led to the making of this album is fascinating, as are the individual illustrations which capture 36 scenic spots of the emperor‘s summer residence at Rehol, north of Beijing.

To commemorate the completion of its final phase of construction and his approaching sixtieth birthday, the Kangxi emperor decided to publish a selection of his poems and prose, which became the Imperial Poems in Mountain Estate for Escaping the Summer Heat (Yuzhi Bishu shanzhuang shi). He selected some of his many poems to comprise some thirty-six views of the gardens within the Mountain Estate and specially composed a series of poems and descriptive prose, each accompanied by specially commissioned illustrations in the form of woodblock prints. These illustrations were based on images painted or drawn in simple outlines by the court artist Shen Yu (d. ca. 1727) and consequently engraved under the supervision of two of the most skillful artisans, Zhu Gui and Mei Yufeng (both flourished ca. 1669-1713).

The accompanying woodblock illustrations were purely static, frontal panoramic views that provided additional information about the actual views. The Kangxi emperor was well aware of the advantages of the European-style copperplate engraving technique from the Western books presented to him by western jesuits. However, this technique was not available in China as neither the required materials nor expertise existed. Matteo Ripa, a Jesuit who had been at the court of the Kangxi emperor who was later given the Chinese name Ma Guoxian, had taught himself the basic technique of etching with aquaforte but had never practiced. The Kangxi emperor commissioned him to produce thirty-six engravings of his Mountain Estate views as copperplate engravings. In the next two years, Matteo Ripa produced seventy sets of the Thirty-six Views of the Mountain Estate for Escaping the Summer Heatwhich he printed, bound and presented to the emperor in 1714. They represent the first European-style copperplate engravings produced in China.

The Kangxi emperor ordered Ripa to have the views interpreted in the European style. Even though Ripa began by producing an exact tracing of the woodblock prints and did not employ European fixed-point perspective; but followed the traditional Chinese perspectives; his incorporation of shading created the kind of enhanced perception of depth that Kangxi had found inspiring in the work of Western artists. Ripa‘s principle techniques of ‘Europeanising’ the Chinese woodblock prints included reshaping some of the landscapes, adding more architectural details, changing the leaves and outer shapes of trees, adding chiaroscuro shading to the sky, architecture, land forms and water, using cross-hatching and parallel lines, introducing elements such as the sun, clouds and waves, thickening and thinning lines for emphasis, and thus producing a denser and deeper image of sharper contrasts that evoked space filled with more objects.

The first complete set of the Thirty-six Views was presented to the emperor bound into a book possibly in a Western style similar to the present copy. Printed in batches, the remaining copies were bound in different formats and various kinds of paper were used. While the Kangxi emperor had not wished to disseminate these sets of engravings abroad, It is believed that Matteo Ripa brought back some twenty or more sets upon his return to Europe in 1724. At least fourteen copies in different formats, folded and bound, unfolded and unbound, some with Chinese characters, some with Italian markings, are known in institutions in Italy, France, England, Germany and the US making the present album an exciting discovery. 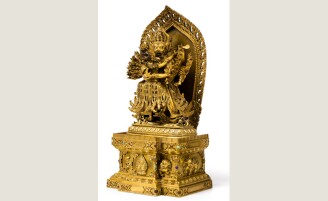