A Bonaparte of History

By Claudia Barbieri
To mark the 200th anniversary of Napoleon’s death, a series of events will examine the revolutionary leader through art

Military genius or overreaching tyrant? Napoleon’s image has veered wildly over the years. This year, the bicentenary of his death, a programme of exhibitions, performances and other events across France explores his legacy in the fields of law, education, finance and culture.

Sotheby’s Paris is offering more than 100 lots of Napoleonic memorabilia in Influencing the Arts: Napoleon, a one-of-a-kind online sale, in September. The French capital is also hosting multiple shows, including two at the Army Museum in Les Invalides. Napoleon is No More brings together paintings, death masks, texts and artefacts from the ex-emperor’s last days in exile on St. Helena; in counterpoint, Napoleon Encore revisits the Napoleonic legend through the work of two dozen contemporary artists, including Marina Abramović, Laurent Grasso, Julian Schnabel and Yan Pei-Ming.

Meanwhile, at the Grand Halle de la Villette in northern Paris, a consortium of state museums has put together a nine-part blockbuster tracing Napoleon’s career in 150 artworks, fronted by Napoleon Crossing the Alps, Jacques-Louis David’s famous 1801 equestrian portrait. Dark aspects of his reign will also be explored: one section focuses on his restoration of slavery in the French Caribbean islands.

Beyond Paris, there are exhibitions at the Musée Fesch in Ajaccio, Corsica and at Liège-Guillemins railway station in Liège, now part of Belgium. 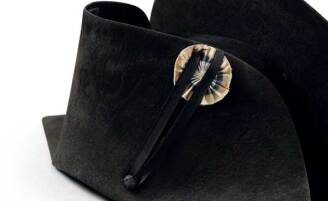 Perhaps the most highly anticipated memorial, however, is Christo’s last, posthumous, project. The installation artist, who died in 2020, long dreamed of wrapping the Arc de Triomphe. From 18 September to 3 October, the monument to Napoleon’s military triumphs will be swathed in 25,000 sq m of silver fabric and 3,000m of rope. It’s an enigmatic tribute to one of history’s most contradictory lives.

A selection of lots from Sotheby’s groundbreaking sale


The Corsican Ogre’s Remorse A scathingly satirical work by the Belgian artist James Ensor from circa 1890 depicting Napoleon reviewing his troops. The oil-on-wood painting is estimated at €300,000–500,000.


Jérôme’s candlesticks A pair of silver candelabra engraved with the arms of Napoleon’s youngest brother Jérôme as King of Westphalia. Estimated at €80,000–120,000.

Napoleon's Bicorne Hat | The Embodiment of the Emperor himself


Napoleon Bonaparte: The Arts Under His Influence, Sotheby’s Paris, 15–22 September