1. Jeff Koons was born in 1955 in the city of York, Pennsylvania. His family ran a furniture store.

2. As a young man, Koons revered the work of Spanish artist Salvador Dalí to such an extent that he jumped on a bus for New York, aged 17, when he learned the Surrealist master was staying at the city’s St. Regis Hotel. Dalí not only agreed to meet Koons but even took him to see a new exhibition of his work at an uptown gallery.

3. In 1975, Koons enrolled at the School of the Art Institute of Chicago, combining his studies with an assistant’s role in the studio of painter, Ed Paschke. According to Paschke, Koons used to stretch canvases so tight, it often left his fingers bleeding.

4. Koons wouldn’t stay in Chicago for long. Apparently, after hearing the Patti Smith album Horses on the radio, he decided he wanted to be part of the New York cultural scene right away.

5. On moving to New York, Koons took a job at the Museum of Modern Art (MoMA), working on the membership desk. He attracted attention by wearing polka-dot shirts, big bow ties and, occasionally, an inflatable plastic flower. According to Koons, MoMA membership doubled during his time there.

6. His breakthrough as an artist came with a series of sculptures in the early 1980s called “The New”. Partly inspired by the “readymades” of Marcel Duchamp that he’d seen at MoMA, these consisted of vacuum cleaners displayed in transparent Plexiglass vitrines.

7. He had another early success with his Total Equilibrium Tank pieces: basketballs fully or partially submerged in tanks of salted water. Koons was assisted in their creation by the Nobel Prize-winning physicist, Richard Feynman.

8. Before he had the economic means to support himself solely through art, Koons worked as a commodity trader on Wall Street.

9. Perhaps Koons's best-known sculptures are those that were inspired by balloon animals – and produced in mirror-polished, stainless steel. In 2008, a huge “balloon dog” – in resplendent magenta colour – was installed in the Salon d’Hercule, as part of a Koons exhibition at the Palace of Versailles.

10. Koons often turns his attention to the language and imagery of advertising. This is demonstrated in his Luxury and Degradation series, which focussed on the alcohol industry, with celebrated works such as his 1986 Jim Beam - J.B. Turner Engine. By choosing a range of different advertisements and objects as source material for this series, Koons looked to present a cross-section of America’s socio-economic climate. He further comments on this subject by using steel, a material associated with industrial America.

11. Koons is sometimes referred to as the king of kitsch. Perhaps the kitschiest of all was his Banality series from 1988. These sculptures, in wood and porcelain, depict subjects such as the Pink Panther embracing a topless woman; and a wooden statue of Buster Keaton. 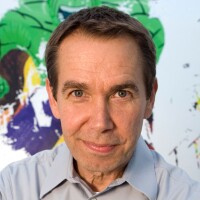 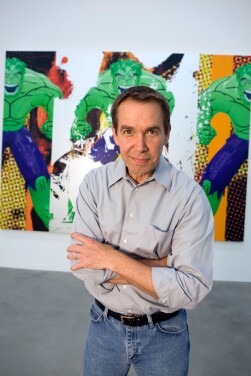 12. It must be said Koons also has a keen appreciation of art history. St John the Baptist from the Banality series, for instance, is a sculptural version of Leonardo da Vinci’s painting of the same name – albeit with a piglet and penguin in the saint’s grasp that are of course not featured in the original.

13. "In this century, there was Picasso and Duchamp," said Koons in 1990. Never one for modesty, he added: “now I’m the one taking us out of this century".

“My art and my life are totally one. I have everything at my disposal and I’m doing what I want to do. I have my platform, I have the attention. This is the time for Jeff Koons.”

14. Koons has influenced many other artists, perhaps most famously Damien Hirst. “The first time I saw his work…in the late 1980s, it just blew me away”, Hirst has said. The Englishman today boasts a large collection of Koons's art and in 2016 showed much of it at the exhibition Jeff Koons: Now in his London space, Newport Street Gallery.

15. The artist has been married twice, the first time to adult actress, Ilona Staller. With her, he made his most controversial work to date: Made in Heaven, a series of photorealist paintings and glass sculptures depicting the couple engaged in sexual acts.

16. Koons has become one of the world’s most lucrative artists, his work regularly breaking records at auction – one example being The Hanging Heart (Magenta and Gold), which fetched $23.6m (£11.7m) at Sotheby’s New York in 2007, at the time the auction record for a living artist.

17. He keeps a studio in the Chelsea neighborhood of New York, where around 100 people are employed.

18. In 2013, he was invited by Lady Gaga to design the cover for her third studio album, Artpop.

19. Exhibitions of Koons’s work have been held across the world, the largest a 2014 retrospective at the Whitney Museum of American Art in New York, which took up five of the venue’s six floors. The show later travelled to the Centre Pompidou in Paris and the Guggenheim Bilbao in Spain.

20. Ahead of the Whitney exhibition, Koons was the subject of a major profile in Vanity Fair magazine, for which he was photographed working out naked in the gym by Annie Leibovitz.

21. His sculptures are regularly displayed in public spaces – on three separate occasions outside New York’s Rockefeller Center alone. His most recent piece there was Seated Ballerina in 2017, depicting a dancer in a blue tutu adjusting one of her shoes. The work was 45 feet high.