1. Egon Schiele is one of the leading figures of Austrian Expressionism.

Schiele’s psychologically and emotionally charged works are known for their figurative distortions, sinuous linework, unconventional composition and expert application of color. His evocative figures are elongated and jaundiced, devoid of ornamentation, and presented alone, as if emerging from a void.

Inspired by the writings of Sigmund Freud, Schiele’s spare compositions peel back the curtain of the conscious mind to confront the viewer with the nakedness of human desire, anguish and tenderness.

With his rail thin frame, shock of spiky dark hair and predilection for shaking up the establishment – not to mention his short prison stay and tragic death before the age of thirty – Schiele might as well be the prototype for the 1970s punk. Patti Smith once explained her attraction to Television frontman Tom Verlaine by citing his “Egon Schiele look.” David Bowie – whose pose on the cover of his 1977 album Heroes is an homage to the artist – was tapped to play Schiele in an unfinished 1978 biopic. In fact, Schiele experienced a revival in popularity in the 1970s, no doubt facilitated by the same cultural moment that gave birth to the Sex Pistols (whose lead singer, Sid Vicious, might as well have been Schiele’s long-lost twin). 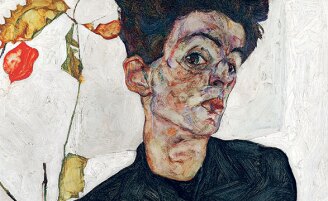 3. Gustav Klimt was his mentor.

At the age of 17, Schiele sought out the older artist, whom he greatly admired. Klimt took Schiele under his wing, helping him to sell his drawings, arranging models and introducing him to the arts and crafts workshop, the Wiener Werkstätte. In 1909, Klimt invited Schiele to exhibit at the Kunstschau Wien, where he was exposed to the works of Edvard Munch and Vincent van Gogh. While Schiele’s early works are highly indebted to Klimt, he soon developed a distinctive lexicon of his own, rejecting the decorative art nouveau style and evolving toward Expressionism. The two artists are pictured together in Schiele’s The Hermits (1912), an allegorical work in which the younger Schiele appears to eclipse and engulf his mentor. While they grew apart stylistically, Schiele and Klimt maintained a close personal and professional relationship until both of their deaths in 1918. 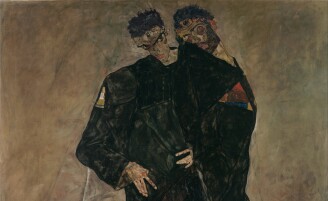 4. When Schiele was 14, his father died of syphilis.

Schiele’s father Adolf, who worked as a stationmaster for the Austrian State Railways, likely contracted the disease before his marriage. By the time Schiele was an adolescent, his father was in the throes of end-stage syphilis. As a result, Adolf was prone to violent and erratic behavior, once setting fire to his son’s sketchbooks. His father’s untimely demise left a lasting impact upon Schiele, whose body of work bespeaks a deep preoccupation with mortality and decay.

5. After dropping out of the Akademie, Schiele founded the Neuekunstgruppe (New Art Group) in 1909.

Schiele entered the Akademie Der Bildenden Künste (Academy of Fine Arts) in Vienna at the age of 16, the youngest student ever to enroll. There, he studied under Christian Griepenkerl, whose ultra-conservative didactic approach left Schiele alienated and dissatisfied. The dislike was apparently mutual, with Griepenkerl once exclaiming: “You! You! The Devil shat you into my class.” In 1909, Schiele and a group of likeminded peers founded the Neuekunstgruppe, for which Schiele wrote the manifesto.

7. The last year of his life was his most successful.

In March of 1918, Schiele was featured at the Secession’s 49th exhibition, with 50 of his works displayed in the main hall. He also designed a poster to advertise the show, depicting himself and his artist friends in a composition reminiscent of The Last Supper, with Schiele taking Christ’s place at the head of the table. An empty chair across from Schiele is a tribute to his late mentor; Klimt died just a month before the exhibition.The show was a critical and commercial success for Schiele, who sold five paintings and received numerous commissions.

8. While best known for his figurative work, Schiele also painted landscapes – one of which set the record as the most expensive piece by the artist to date.

His landscapes, often using the same bird’s-eye perspective and expressive contour that he favored in his portraiture, are an often overlooked but nevertheless significant portion of Schiele’s oeuvre. Notably, his landscapes differ from his other work in their more vibrant use of color – stunningly exemplified in the 1914 painting Houses with Colorful Laundry (Suburb II). The piece sold at Sotheby’s in 2011 for £24.7 million ($40.1 million USD), a record for the artist.

9. He is rumored to have had an incestuous relationship with his younger sister Gertrude (Gerti).

When Schiele was 16, he absconded by train to Trieste with the 12-year-old Gerti, where they spent the night in a hotel room. She is featured in many of Schiele’s early works, including Portrait of Gerti Schiele (1909), as well as eyebrow-raising nudes such as Nude Girl with Folded Arms (Gertrude Schiele) (1910).

10. He was an obsessive self-portraitist.

Schiele’s compulsive narcissism is on full display in his numerous self-portraits, where the use of religious imagery, as in The Prophets (1912), reflects his conviction in the artist as a visionary creator. Often appearing nude, as in Seated Male Nude (Self-Portrait) (1910), the psychosexual frankness with which Schiele presents his own form is unique in the canon of male self-portraiture. In contrast to the anguish and agitation that characterizes many of his self-portraits, Self-Portrait with Physalis (1912) – one of his most famous paintings – is a strikingly sensitive, if unidealized, depiction of the artist.

In 1911, Klimt introduced his protégé to the artist’s model Walburga (Wally) Neuzil – presumably a former lover of Klimt’s, who was himself a notorious womanizer. Schiele and Neuzil embarked upon a four year affair during which she posed for numerous paintings and drawings, including Portrait of Wally (1912). Seeking a reprieve from the Viennese artistic scene, the couple moved to Český Krumlov (Krumau) in Bohemia, and later Neulengbach, where they were dogged by scandal and controversy.

12. His use of young models ignited public opprobrium…

The unflinching eroticism in Schiele’s depictions of pubescent girls, as in Nude Girls Reclining (1912), made him an unpopular figure outside of cosmopolitan Vienna. Schiele and Neuzil’s stay in Krumau was cut short when the locals, who disapproved of Schiele’s employment of underage girls as nude models, drove them out of town. In Neulengbach, Schiele’s studio quickly became a gathering place for the town’s children, again attracting censure.

When Tatjana Georgette Anna von Mossig, the twelve-year-old daughter of a retired naval officer, asked for Schiele’s help in running away to Vienna, Schiele was arrested on charges of abduction and statutory rape. While these charges were eventually dropped (and presumably unfounded), he was found guilty of “public immorality” on the grounds that he exhibited erotic drawings in a place accessible to children. The police seized some 125 such drawings, and the judge at Schiele’s trial made a point of burning one of the offending pieces over a candle flame. Schiele ultimately spent 24 days in jail, during which he created a series of 12 paintings that vividly depict the discomfort of his incarceration. Traumatized by the ordeal, he subsequently ceased using adolescents as nude models.

14. In the #MeToo era, the art world is confronted with reexamining his legacy.

Like many male artists that history has lionized, Schiele’s treatment of women is a controversial subject. In recent years, he has been name-dropped in numerous pieces reflecting on the #MeToo movement’s impact on the cultural conversation surrounding art and artists. While the most serious charges against Schiele were ultimately dropped, his use of minor-aged girls as nude models – exploitative at best – is something that modern audiences are reevaluating. Museums are taking notice: when the Museum of Fine Arts in Boston mounted the 2018 exhibition Klimt and Schiele: Drawn, they included wall text acknowledging the charges of sexual misconduct against Schiele. Of course, Schiele has not been without his defenders; in June of 2018 The Art Newspaper published an article titled “Egon Schiele was not a sex offender.”

In 1915, Schiele wrote to his friend, the critic Arthur Roessler: “I intend to get married, advantageously. Not to Wally.” In June of that year, he was married to Edith Harms, the daughter of a respectable middle class Viennese family. Expecting to maintain his relationship with Wally, Schiele drew up an agreement stating that they would vacation every summer without his wife; Neuzil, disgusted, rejected the offer and refused to see him again. His break with Wally inspired one of his most haunting works, Death and the Maiden (1915-16), an intimate and wrenching portrayal of death and doomed love.

Reporting for service just four days after his wedding, Schiele worked as a clerk at a POW camp doing office work and escorting Russian prisoners. Using an empty store room as a studio space, Schiele continued to draw and paint throughout his service, participating in exhibitions in Amsterdam, Stockholm and Copenhagen. Naturally, his subject matter was influenced by the change in setting; during this period, Schiele produced numerous portraits of military officers, land and cityscapes.

17. He probably had an affair with his wife’s sister.

Not long after his marriage to Edith Harms, Schiele began using her sister Adéle as a model. It is likely that they had a sexual relationship; Adéle would later acknowledge that their arrangement was not as chaste as it should have been.

18. Today, the Leopold Museum in Vienna houses the largest Schiele collection in the world.

Opened to the public in 2001, the museum focuses on Austrian art from the first half of the 20th century. The result of five decades of collecting, in 1994, Rudolf Leopold consolidated some 5,200 works into a private foundation with the assistance of the Republic of Austria and the Austrian National Bank. In addition to 220 paintings and drawings by Schiele, the collection also boasts major works by Gustav Klimt, Oskar Kokoschka and Koloman Moser. 19. His painting Portrait of Wally (1912) was the subject of a high-profile case of Nazi art theft.

Rudolf Leopold obtained the painting in 1954, and it became a part of the Leopold Museum’s permanent collection. In 1997, the work was loaned to the Museum of Modern Art in New York for an exhibition, at which time The New York Times published a shocking exposé revealing the painting’s provenance. Portrait of Wally had been in the collection of Lea Bondi Jaray, a Jewish art dealer who forfeited the painting under duress to Nazi art expert Friedrich Welz in 1939. After the article’s publication, Bondi’s heirs contacted the New York District Attorney’s office and a subpoena was issued barring the painting’s return to Austria. In 2010, after 13 years of litigation, the Leopold Museum agreed to pay $19 million in restitution to Bondi’s heirs. The dramatic case is the subject of the 2012 documentary Portrait of Wally.

By the fall of 1918, the global flu pandemic – which ultimately infected 500 million people and killed 3 to 5% of the world’s population – was tearing through Europe. On 28 October, Schiele’s wife Edith, 6 months pregnant, succumbed to the disease. Schiele died just three days later, cutting short a brilliant artistic career. His last words were reportedly: “The war is over – and I must go.”

21. In his short life, Schiele made a big impact.

While his career lasted under a decade, Schiele was incredibly prolific, creating over 330 paintings and 2,500 drawings. Many of his figure drawings were executed at lightning speed, completed in two to three minutes. His legacy is one of immeasurable consequence, influencing Neo-Expressionists as diverse as Francis Bacon, Julian Schnabel, and Jean-Michel Basquiat. 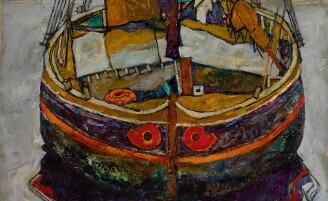 Past Lots by Egon Schiele 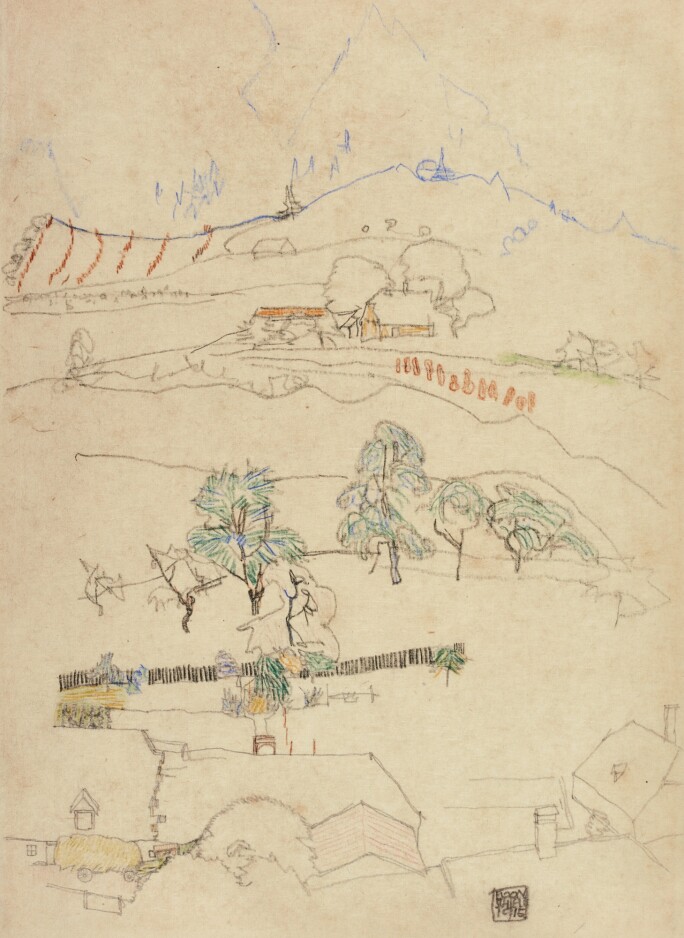 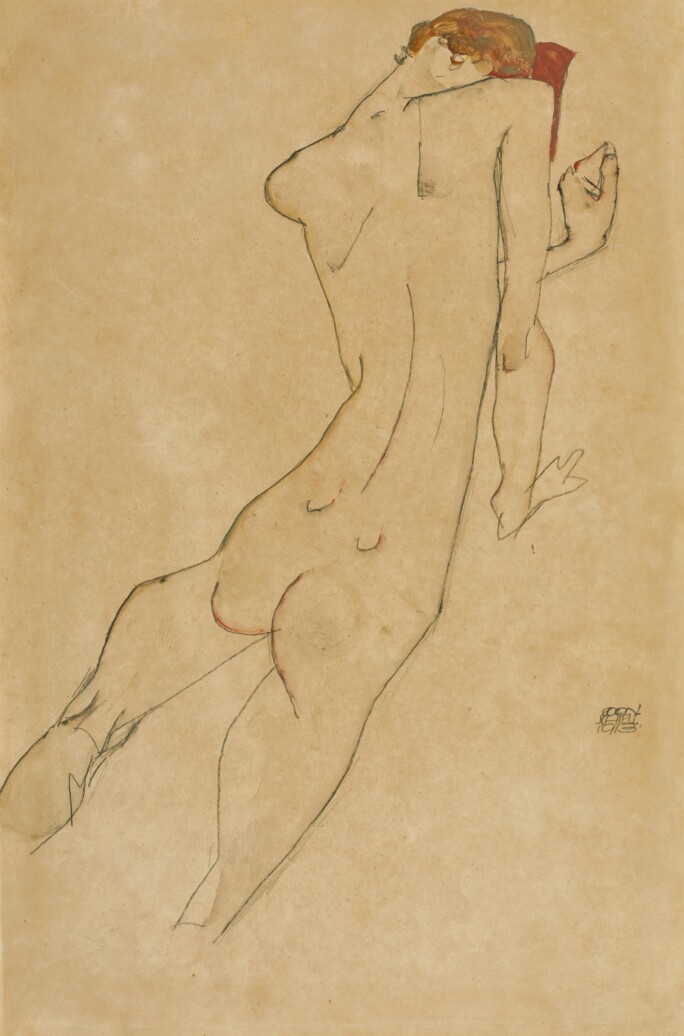 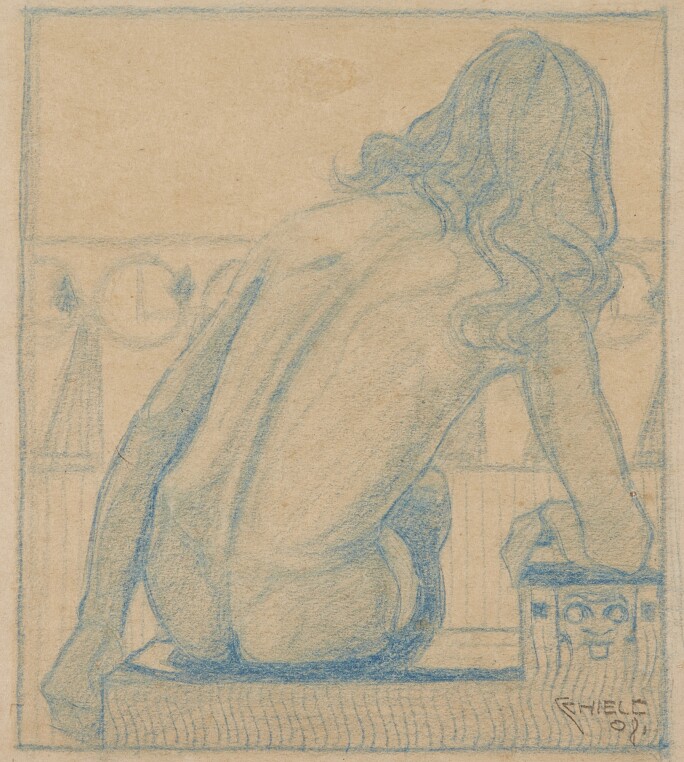 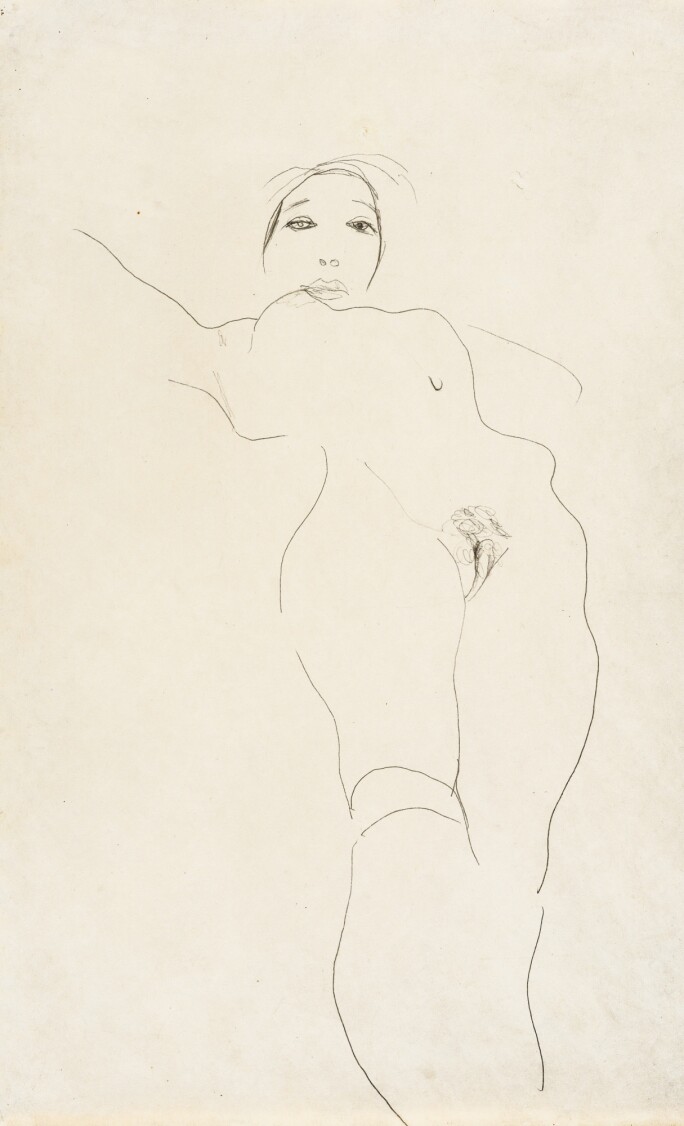