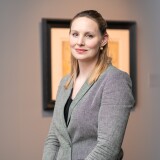 Eva Donnerhack joined Sotheby's in 2006 as provenance researcher and expert liaison for Impressionist & Modern Art in Vienna with interim assistance in London and New York. Within six years Miss Donnerhack was promoted to Deputy Director, and appointed to Director in 2017.

In 2014 Eva Donnerhack moved to London to cover the position of the Co-Head of Day Sale Impressionist & Modern Art to build up the relevant sales. Since 2015 she is an expert at Sotheby's Cologne from where she is considerably contributing to the main sales in London, Paris and New York.

Over the years Eva Donnerhack was significantly involved in numerous important sales of German and Austrian Art and was key contributor to the solution and success of many high profile restitution cases. Some of these successes include the sale of Gustav Klimt's Kirche in Cassone, the first official private restitution, which was sold at Sotheby's London in February 2010 for £26.9 million and set a world record, as well as the sale of Egon Schiele's Werk Häuser mit bunter Wäsche (Vorstadt II) in June 2011 in London on behalf of the Leopold Museum in Vienna, which achieved with a result of £24.7 million also a world record. Furthermore she was an essential part in the sale of another masterpiece by Gustav Klimt-Litzlberg am Attersee, which sold in November 2011 for $ 40.4 million at Sotheby’s in New York.