8 Things to Know About Chinese Numerology

C oinciding with Sotheby’s Asia Week, the Diamonds Online | Capsule Collection sale (8–18 September) celebrates the Chinese tradition of numerology, particularly the highly auspicious number 8, considered the luckiest of all. The auction features 8 lots of exceptional loose diamonds, specifically chosen for their combination of impeccable quality and carat weights featuring the number 8. Ahead of the sale, brush up on Chinese numerology basics, which illuminate a more symbolic meaning behind these stunning and rare stones.

1. Numerology is an Important Part of Daily Life
Whether it’s buying a home or selecting a date for a special occasion, many Chinese people look to auspicious numbers to guide their decision-making in hope of a successful outcome.

2. 8 is Considered the Most Prosperous Number
The word for 8 in Chinese sounds similar to the expression that means “to prosper.” Additionally, the number’s form — two perfectly balanced, seamlessly connected loops — is the universal symbol for infinity, making these diamonds sentimentally suited to being tokens of love and commitment, such as in the form of engagement rings.

3. 6 & 9 Are Also Considered Lucky
The pronunciation of 6 is similar to the word for “smooth,” as in things going smoothly. 9 sounds like “eternity” and “longevity” is associated with the Emperor of China, who has nine dragons on his robe.

5. Auspicious License Plates & Phone Numbers Command Millions at Auction
There are many news stories about multi-million-dollar sales for items bearing the lucky numbers in China. In 2016, someone in Hong Kong bid $2.3 million on a license plate that featured “28.”

6. Even Numbers Are Generally Considered More Auspicious than Odd Ones
For this reason, gifts are typical given in pairs or even amounts. Looking to buy a diamond duo? Our auction has round and pear-shaped stones, which will work beautifully together for dramatic earrings, or whichever design you please.

7. 4 Is the Most Unlucky Number
Because the word for 4 in Chinese sounds very close to the word for “death,” it is associated with misfortune. For this reason, you won’t find any 4s in the carat weights of Sotheby’s Diamonds Online auction!

8. 5 is a Neutral Number
There are five blessings in China (longevity, happiness, wealth, luck and prosperity), as well as five elements (wood, water, fire, Earth and metal). Though 5 can have lucky associations, it has the same pronunciation as the word "nothing" in Chinese, which also can render its meaning as negative.

9. Numerology Can Operate Like Horoscopes
In Western culture, many look to astrological signs to analyze various aspects of their lives. But in Chinese tradition, a person’s character can be analyzed by his or her lucky numbers, which are determined through one's birthday, and likewise, Chinese zodiac sign.

While each number has its own significance, positive or negative, in traditional Chinese culture, the above are meant to provide a brief overview of some of the most fascinating examples. 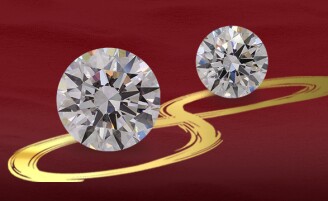